In a country that has limited agricultural land and commonly endures floods, droughts and typhoons, controlled-environment agriculture may be an ideal alternative to traditional farming

For millennia, the plants that humans have eaten absorbed light energy from the sun, and water from the soil through their roots. Farmers hoped and prayed for just the right amount of rain, temperatures that would make their crops thrive and an absence of pests.

Now, consumers in Taiwan and many other countries can buy vegetables that have never come into contact with soil, been exposed to sunlight or been made wet by falling rain.

In few places does indoor farming, also known as controlled-environment agriculture (CEA), make more sense than in Taiwan. Farmers here lack space (according to official statistics, household engaged in agriculture have on average less than one hectare of farmland each), endure floods and droughts and worry typhoons might destroy their crops. What’s more, Taiwan has scores of disused industrial sites that could be repurposed into vertical farms.

A vertical farm in Taoyuan City’s Lujhu District (蘆竹) is the most productive example of CEA in Taiwan, according to Jesper Hansen, chief commercial officer of YesHealth Group, the company that designed and operates it. 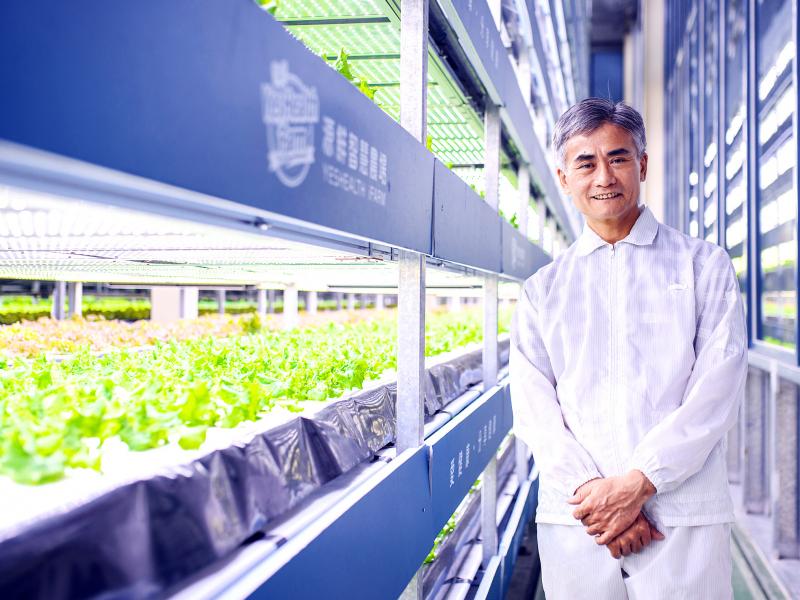 The farm, inaugurated in 2017, yields 1.5 to 1.6 metric tonnes of lettuces, cruciferous vegetables and herbs every day of the year. Its growing chambers, which cover 3,000 square meters, are dominated by 10m-high, 14-level sets of shelves on which 50 farming staff nurture leafy greens.

The various types of leafy greens grown by YesHealth take between 21 and 32 days to grow from a seed to a harvestable product. The company doesn’t currently grow tomatoes or cucumbers on a commercial basis, because they take a relatively long time to grow from seed, Hansen says.

YesHealth Group founder and CEO Winston Tsai (蔡文清) comes from a technology background. His passion for pesticide-free food dates from his battle with a liver tumor several years ago.

The company’s first hydroponics facility, set up in 2013, produced 200kg of produce per day.

“At that time, it was considered quite a sizable vertical farm,” says Kevin Lin (林威立), YesHealth’s director of business development.

That site, superseded in terms of efficiency as well as size, now functions as the company’s R&D center. 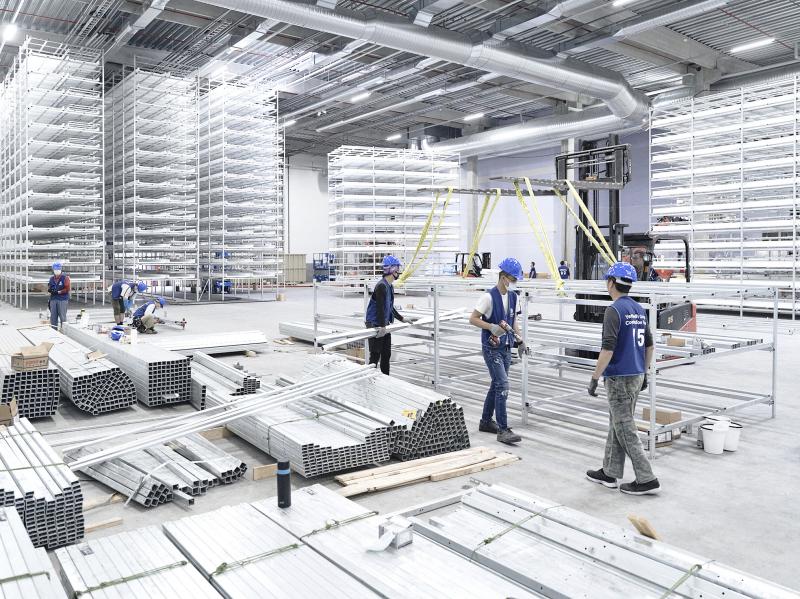 Identifying and recreating the ideal conditions for a particular plant isn’t easy. Lin gives as an example the constant breeze that blows over YesHealth’s lettuces.

“Getting the windspeed exactly right took us several years,” he says, adding that, by mixing the air, wind helps plants to absorb more carbon dioxide.

Some vertical farms are airtight. One advantage of a closed system is that the amount of carbon dioxide in the air can be enhanced so as to boost photosynthesis levels. In places that are exceptionally hot or unusually cold, closed systems are more energy efficient, because they reduce the need for cooling or heating.

The Taoyuan facility has an open system. As air is drawn in, it’s filtered to keep out dust and insects.

Different crops thrive best in different light spectrums, and the farm’s LED arrays can be adjusted to achieve these conditions.

Compared to conventional farming, hydroponic agriculture uses tiny amounts of water, because the rate of evaporation is far lower. In YesHealth’s Taoyuan farm, water is recirculated for 45 to 60 days, then discarded.

A biofertilizer solution made from soybeans, brown sugar, oyster shells and other components is added to the water. Antagonist microorganisms are used to combat fungi and algaes, which may arrive in the air or on the seeds themselves.

Vegetables are grown in manmade substrate (previously plastic foam, now a biodegradable gel) on thin polystyrene boards that are reused. Polystyrene has a reputation for being bad for the environment, because it decomposes so slowly if at all. However, it tends to release toxins only when heated or exposed to sunlight; inside a vertical farm, this is unlikely to happen.

Visitors to YesHealth are educated as to the sustainability advantages of CEA, “But here in Taiwan, our USP continues to be that our produce is healthy and pesticide-free,” says Hansen.

Some visitors say that the farm’s produce — which is sold on site, through chains like Carrefour and Jasons Market Place and supplied to several high-end hotels — is attractive yet pricey.

“We shouldn’t benchmark vertical-farm produce with crops grown outside,” Hansen insists, while lamenting that few consumers in Taiwan appreciate that vegetables that cost more may well be better for you — and better for the creatures with which humans share the planet.

“We can produce perfect-looking vegetables without contaminating them with chemicals or harming the environment,” he says.

Hansen explains that while YesHealth will continue to supply Taiwanese consumers with produce so clean it can be eaten raw without washing, its global role is now that of a technology provider for overseas partners.

“We’ve realized that our technology is superior to many of our foreign counterparts. This has a lot to do with the R&D mindset here and the supply chains in Taiwan and China,” says Hansen. “Our technology is all in-house. We don’t buy any third-party solutions.”

“Of course, it’s more expensive than using free sunlight and free rainwater, but in five years or 10 years, I believe our produce will be competitive with produce from traditional farms,” Hansen says.

The cost of setting up and operating a vertical farm is dropping.

“The technologies we use — LEDs, automation, robotics, software — are becoming much more efficient over time,” Hansen says.

At the end of last year, YesHealth Group, working in partnership with Nordic Harvest, completed what’s said to be Europe’s largest indoor farm on the outskirts of Copenhagen. Hansen describes the Danish facility as “massively more efficient” than YesHealth’s main Taoyuan farm.

Conventional farmers in Taiwan and Denmark have nothing to fear from YesHealth.

“In every project, we try first to substitute imports, not locally-grown food,” Hansen stresses.

The Copenhagen farm will be able to supply three metric tonnes of greens per day when it reaches its full production capacity.

“Because we’re able to grow locally all year round, we’re doing away with a huge number of food miles,” says Hansen, who points out that perishables are often flown several thousand kilometers from farms to supermarkets in Europe and Asia.

Taiwanese scientists have developed space-efficient devices that permit the automated monitoring of a plant’s weight, accurate to 0.1g. However, rather than track the progress of each lettuce, YesHealth aims to develop a perfect standard operating procedure for each crop.

“We don’t need lots of sensors, because our R&D team has worked out what conditions are needed to get the best results. The only monitoring we need to do is to ensure that the temperature or another variable doesn’t stray beyond the normal range. We control these parameters tightly, so the plants grow the same way every time. We’ve never lost a harvest,” Hansen says.

YesHealth’s way of farming can be likened to baking. If the ingredients are mixed in the right proportions, and the temperature and timing are spot on, the cake — or the kale — will come out just right.

“If you harvest and wash a leafy green, it’s almost impossible to dry it properly. When you wrap it, because of moisture on the leaves, it’ll have a short shelf-life,” says Hansen. He says that YesHealth’s salad products last twice as long on the shelf as traditionally outdoor grown produce, because they are “extremely clean, dry and ready to eat.”

Asked if YesHealth will ever grow GM crops, Hansen replies that when crops undergo genetic modification, it’s usually to protect them against pests or to enhance fertilizer takeup.

“We don’t need those attributes,” he says.

The rapid growth of CEA isn’t likely to diminish the use of GM crops, however, because currently there’s no feasible way to produce indoors the cassava, maize, potatoes, rice and wheat that meet most of humanity’s food needs.

Vertical farms are almost certainly a good thing. But even in crowded and industrialized Taiwan, conventional agriculture isn’t going away. The rise of CEA shouldn’t distract farmers or consumers from understanding and managing the ecological impacts of rice paddies, fruit orchards and chicken farms.

Steven Crook, the author or co-author of four books about Taiwan, has been following environmental issues since he arrived in the country in 1991. He drives a hybrid and carries his own chopsticks.

This column does not necessarily reflect the opinion of the Taipei Times.