New nuclear technologies will be needed alongside existing nuclear plants and renewables as the USA transitions to a carbon-free future, but they will continue to need legislative support at the federal and state level, utility leaders said during the opening session of the Nuclear Energy Institute’s Nuclear Energy Assembly this week. 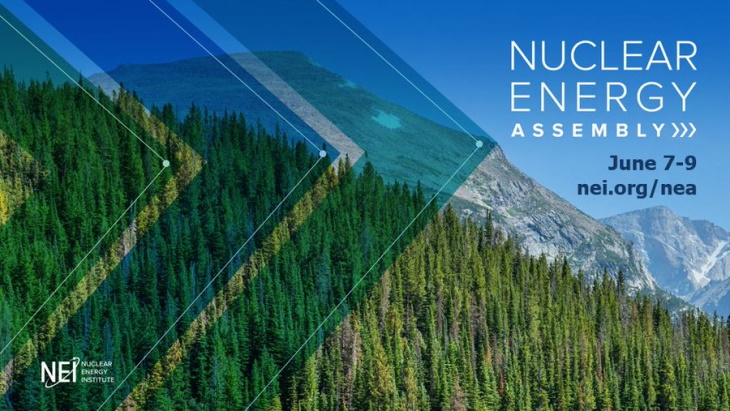 “It’s been an incredibly trying year – not just for our industry, but for the country as a whole. The pandemic has forced us to think differently,” Nuclear Energy Institute CEO Maria Korsnick said in her opening address. “We’re thinking differently about how we want to work and live. About how to strengthen our economy and our infrastructure. And when it comes to energy, we’re thinking differently about the best way to reach a carbon-free future. This year, our message to the world is simple: Nuclear energy is the source that can make it all work – not just electricity production, but job creation, economic revitalisation, and decarbonisation.”

Nuclear plants produce 20% of the nation’s total electricity and more than 50% of its carbon-free electricity, and last year became its second-largest source of electricity, Korsnick said. It has done this by operating at more than 90% of capacity for the last 22 years, while becoming even more affordable, helping build thriving communities, and creating good-paying jobs. “Our industry provides real opportunity and growth. We can accelerate our national economic recovery, and truly help communities ‘build back better’,” she said.


“Throughout the pandemic, and during sudden crises like this year’s devastating winter storms across the southern US, nuclear workers powered through unprecedented conditions. They kept the lights on in hospitals and the heat on in homes,” Korsnick said. The USA’s nuclear fleet is “the very definition of essential” and an “unparalleled coalition for making nuclear energy the core of our clean energy system” is being built at the federal and state level, she added.

Nuclear must play its vital role alongside other carbon-free sources like wind, solar and hydro and this is recognised by the Biden and state administrations, she said, citing increased Congressional appropriations to accelerate research, development and demonstration of new technologies, and bipartisan support for legislation recognising nuclear’s economic and clean-energy contributions.

“Because of everything we’ve built together, we’re poised to meet this moment,” she said. “We’ve gone from concept to site selection. We’ve gone from design to demonstration. We’re not just talking about the next generation of nuclear technology – we’re actually beginning to build it.

“The next generation of reactors will come in all sizes, makes and models. They are going to be flexible and versatile. They’ll be able to change their output, pairing perfectly with more variable sources like wind and solar.”

In many cases, she said, next-generation nuclear reactors could “literally” be built on fossil fuel sites where much of the infrastructure connecting plants to the grid already exists, and special incentives for advanced reactor construction in “coal country” would keep jobs in communities that badly need them. “States like Wyoming, Montana, North Dakota, Utah, and West Virginia have all signalled interest in this approach. Our industry can create clean energy capacity and economic opportunity in the places that need it most,” she said.


Climate goals – and a clean-energy future – cannot be achieved if current nuclear plants close, she said. If all the USA’s nuclear plants under threat of closure this year are shut down, this would be equivalent to all of the renewable energy deployed in 2019. “That isn’t decarbonising, it’s throwing in the towel before the fight even begins,” Korsnick said.

Four of those units – at Byron and Dresden – last week failed to clear the PJM Interconnection capacity auction. Exelon announced last August that those units would close prematurely if the state of Illinois does not pass policy reforms to support their continued operation before the end of the current session. Exelon said in a 2 June filing to the US Securities and Exchange Commission that its Braidwood and LaSalle plants are also probable candidates for early closure owing to market rules that favour carbon-emitting power generation.

David Rhoades, president and chief nuclear officer of Exelon Nuclear, said failure of the Exelon plants to clear the PJM auction reinforced the “unpredictability” of the markets. “We had several units that did not clear and were not recognised for [their resiliency and zero-carbon attributes], which again makes it imperative to have both state and ultimately federal legislation that recognises these plants – the tremendous value they provide to the state and the nation,” he said. Without federal-level legislation, the different legislative policies from state to state make capital investment decisions difficult, he added.

Xcel Energy CEO Ben Fowke said losing any of the USA’s legacy nuclear fleet – whether regulated or merchant – would be like “taking two steps back before taking one step forward”. Xcel Energy by 2030 will have wind and solar as the biggest energy source in its mix – moving away from coal – and plans to relicense its nuclear capacity at Monticello and Prairie Island. But the last 20% of decarbonisation will need new, dispatchable carbon-free technologies, including advanced nuclear generation, he said.

Duke Energy CEO Lynn Good said nuclear is essential for the clean energy transition and the company is filing for second licence renewals, beginning with Oconee. “We see the continued operation of these plants as essential to achieving that clean energy vision,” she said.

Moving beyond 2030 to achieve net zero, new technology will be needed and “advanced nuclear becomes part of that conversation pretty quickly,” she said. “Sustained contribution and focus on research and development in this decade is essential so those technologies are available at commercial-scale ‘ready to go’ to maintain the affordability, the reliability that our customers count on.”


Korsnick asked the panellists what markets and governments could do to encourage the relicensing of existing capacity and the construction of new advanced technology.

Brad Sawatzke, CEO of Energy Northwest, spoke of the company’s involvement in the TRi Energy Partnership alongside Grant County Public Utility District and X-energy, which aims to build a plant based on X-energy’s Xe-100 reactor design at Energy Northwest’s existing Columbia site in Washington. The US Department of Energy’s Advanced Reactor Demonstration Program, launched in May 2020 to help domestic private industry demonstrate advanced nuclear reactors in the USA, is at the heart of this opportunity, with DOE covering 50% of the cost, he said.

Good identified community support as being important when seeking second licence renewals, as well as making sure that plants remain efficient going forward. For new nuclear, she called for greater advocacy on the importance of R&D and on clean energy standards, and for nuclear to be a part of the conversation.

Fowke agreed that aggressive carbon-reduction goals need the preservation of the nuclear fleet. This must be communicated and partnerships developed, for example within the labour sector and local communities. There is a need for wider understanding that the “big grid” cannot be run with renewables and batteries alone, and recognition that transmission infrastructure can take many years to be built.

Good also pointed to the scale of the transformation of both grid infrastructure as well as power generation. “If you think about it, we’re rebuilding in large measure the bulk power system that we’ve enjoyed over many decades,” she said, transforming not only the way power is generated but also grid infrastructure to accommodate increasing renewables as coal generation decreases and nuclear plants are relicensed. A sustainable policy that recognises the scale of the task, and the roles of nuclear, renewables and natural gas, is important, she said, as well as recognising the importance of developing grid infrastructure and R&D to enable the transition to take place. All these take time, she said.

“The conversation we’re having is the right one, and keeping the focus not just on the size of the ‘what’ we’re accomplishing but coupling that with the timeframe and the cost implications, and that we also must maintain affordability and reliability, is important,” she said. “Bringing the stakeholders into the conversation – that’s all part of developing the right solution.”