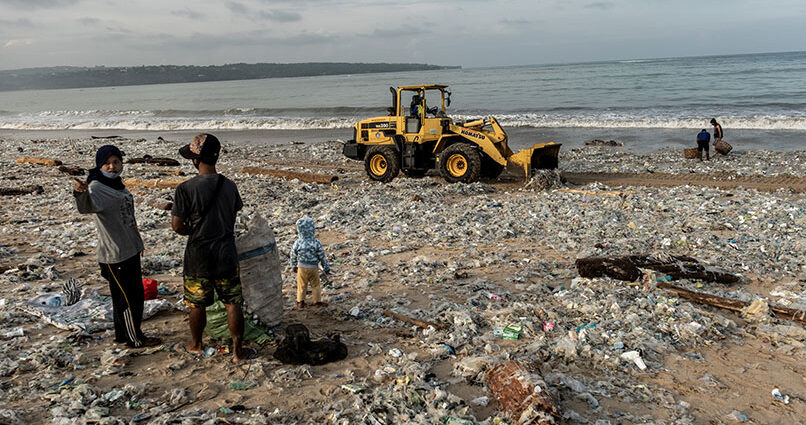 Two pandemics swept the world in 2020. The second – the growing use of single-use plastic as a COVID-safe measure – was considerably less reported, but no less dangerous.

There is little doubt that COVID-19 has led to an increase in plastic waste – from face shields to fast-food containers – much of which can’t be recycled. Worse still, the pandemic has intensified a price war between recycled and virgin plastic, according to a Reuters report.

Oil price declines caused a fall in the price of polyethylene terephthalate (PET) and, in turn, a rise in demand for PET as manufacturers in multiple industries began to move away from more expensive recycled plastic.

With the production of plastics projected to double in the next 20 years, according to a 2016 report by the World Economic Forum, spending on recycling looks like a drop in an ocean otherwise crowded with plastic waste.

Globally, of the more than 220 million tonnes of plastic produced each year, the majority ends up in landfills or in the oceans, where it takes hundreds of years to biodegrade. About 80 per cent of marine litter is plastic and it is estimated that, by 2050, there will be more plastic in the ocean than fish by weight.

The amount of plastic waste being produced in Australia far exceeds that being recycled. The most up-to-date figures, from 2017-2018, reveal that Australians used some 3.4 million tonnes of plastics, but only recycled 9.4 per cent, or 320,000 tonnes.

PET is used to make single-use plastic products. Fashioned from the by-product of petroleum and other fossil fuels, it is cheap to produce, strong, lightweight, waterproof and flexible.

The low cost of PET has been one of the chief hurdles to developing an economically viable system for recycling plastic waste. Why recycle when virgin plastic is so cheap to make?

“The reason it is seen as a problem at the moment is that no one has a value for plastic waste. It is seen as a cost and not a resource, because there isn’t currently a mature and available end-of-life market,” says Colin Barker, director of PlasTech Recycling.

Companies like PlasTech are seeking to turn that thinking around through the development of disruptive technologies capable of economically transforming plastic waste into valuable second-life products.

The drive to improve plastic and other waste management has become more urgent since January 2018, when China decided to impose a ban on imports of several types of waste, including plastics.

Added to this was a growing number of scientific studies showing the damaging effects of plastic pollution on the environment and our health.

At the time, Gayle Sloan, chief executive of the Waste Management and Resource Recovery Association of Australia (WMRR) said this was an opportunity for Australia to create a circular economy in which materials are produced, recycled and reused – creating local jobs in the process.

Unfortunately, nearly three years on, operators are still in the dark about how much waste is being stockpiled, reprocessed or dumped in landfill, and the extent to which the states and territories have embraced a circular economy varies considerably.

WMRR has called for a coordinated strategy and a A$150 million investment to standardise different waste regulations and expand government procurement of recycled materials.

By the Australian Government’s own reckoning in its 2018 National Waste Policy, a hypothetical 5 per cent improvement in the efficient use of plastic materials could “benefit Australia’s GDP by as much as A$24 billion”.

Some in the business community have not waited for governments to act.

One initiative is the “New Plastics Economy”, coordinated by the Ellen MacArthur Foundation, that aims to get rid of problematic plastics altogether and ensure all plastic packaging is 100 per cent reusable, recyclable or compostable by 2025.

More than 60 businesses, government agencies, NGOs, universities, trade bodies and investors have pledged to work towards this target, including Unilever and L’Oréal.

“If you look ahead, in five years, the approach to recycling will have changed… starting to make changes now may seem risky, but it actually avoids having to rush through changes only when regulation or consumer demand forces you to do so.” Professor Glenn Hoetker, Melbourne Business School

Unilever CEO Alan Jope says the company is committed to collecting back more plastic than it sells. Increasing the amount of plastic packaging to be recycled will require support to develop the recycling industry, says Jope.

Unilever is intent on “building the technical and commercial viability of reprocessing materials at scale, and setting up long-term off-take agreements to build business confidence and increase technological investment to ensure better quality recycled materials come into the marketplace,” says Jope.

L’Oréal, too, has taken its commitment to plastic pollution a step further by investing in the breakthrough discovery of a mutant bacterial enzyme that “eats” plastic, creating recycled PET that is equivalent to virgin PET.

Technological innovations in plastic recycling are an opportunity for Australia to take a leadership role in creating a circular economy, where materials are produced, recycled and reused.

Adelaide-based Ryan Lokan, CEO of Advanced Plastic Recycling (APR), looks back on 2 March 2020 as an eventful day. It was shortly before the pandemic had taken hold in Australia, and Lokan was attending Parliament House for the government’s first National Plastics Summit.

It was a rare opportunity to get in front of government, industry and community leaders to showcase his company’s products – products that include boardwalks, viewing platforms, screening, signs and pallets, all designed and manufactured from recycled wood and plastic composite (WPC).

Yet, as he listened to talks about Australia taking responsibility for its plastic recycling, boosting demand for recycled products and expanding industry capability, Lokan found out that his business had missed out on a A$3 million contract to provide WPC fence posts for an upgrade to the 1400 kilometre-long dingo fence that runs from South Australia to south-east Queensland. The contract had gone to a business that was not using recycled plastics.

The irony was not lost on Lokan.

“I should be the busiest man in South Australia. I shouldn’t need to employ a sales team to try and convince the people whose plastic waste it is that [instead of paying to get rid of it] they should pay to turn it into a sustainable, valuable product that will last forever; and yet I have to beg councils to do just that,” says Lokan.

The upside of upcycling

Upcycling solutions such as those offered by APR are part of an emerging market for discarded single-use plastic products. Until quite recently, there has been no economic model that incentivised entrepreneurs to recycle PET products and make a profit.

At the forefront are engineers and scientists, like those at James Cook University, who have collaborated with Australian construction company Fibercon to build footpaths using recycled plastics to reinforce concrete. It is cheaper than steel and creates 90 per cent less carbon to produce.

Some far-sighted local governments have also been experimenting with pilot schemes such as in Sutherland Shire, New South Wales and Hume City Council in Victoria, where stretches of road have been constructed using thousands of plastic bags mixed with asphalt.

This “PlastiPhalt”, developed by roadworks company Fulton Hogan and accredited by Australia’s National Association of Testing Authorities (NATA), is significantly more durable than normal asphalt mixes. The plastics are fully dissolved into the bitumen mixture, so that microplastics are not released even if there is wear and tear. Unlike metal or glass, recycling of single-use plastic is not straightforward, particularly if you are trying to isolate a specific plastic.

PlasTech Recycling has found a solution that eliminates the need to sort, wash, shred, dry and process the waste into plastic pellets before being recycled.

Instead, the PolyWaste technology co-mingles plastic waste into a molten substrate ready for moulding into new products. “The savings in transport, handling and energy alone is about A$600 per tonne,” says Barker.

While the company can demonstrate the technology’s effectiveness, the financing to put the first commercial machine into production has yet to materialise.

Barker’s frustration at the lack of support is evident.

“Here’s a technology that can be regionally scaled and economic. It could solve plastic waste problems in the Pacific Islands, for example, and bring enormous influence for Australia.

“A production plant costing less than A$5 million could service the plastic waste produced by a population of around a quarter of a million, cleaning the environment of plastic and turning it into useful, valuable products that would also provide local jobs,” says Barker.

One of the most striking responses to the plastic crisis in recent years has been the rapid growth of the refillable packaging sector. Loop is an innovative global shopping system launched in 2019 in New York and Paris and due to expand into Australia and Germany in 2021.

The online delivery service sells more than 300 items, from Herbal Essences shampoo to Häagen-Dazs ice-cream, in reusable containers. After using the products, customers put the empty containers in a Loop tote on their doorstep to be collected, cleaned and refilled, and shipped out to consumers again.

Launched at the World Economic Forum, it has some heavyweight consumer product companies behind it, including Procter & Gamble, Nestlé, PepsiCo and Unilever.

Loop is an initiative of TerraCycle, a global leader in recycling and the brainchild of Tom Szaky, who told National Geographic that a new product is added every week and that Loop has partnered with US retail giants Walgreens and Kroger to set up supermarket aisles of refillables, making refillables even more convenient to use.

Szaky acknowledges that, even five years ago, the idea would not have got off the ground, but the speed and scale of the plastic crisis has caused a seismic shift in business thinking and consumer behaviour.

“Loop’s theory is, let’s learn from the past and go back to a model where when you buy your deodorant, you’re borrowing the package and just paying for the content.”

How to get companies into recycling

“Sustainable practices can be effective if they are made part of incentives, connected to pay cheques and promotions,” says Professor Glenn Hoetker from Melbourne Business School’s Centre for Sustainability and Business.

“If a CEO only talks about recycling, then employees can be confused, whereas if I see the company investing in sustainable practices, then I realise they are serious. My advice is, provide visibility for your recycling strategy, gather data on its effectiveness and share it with employees and customers.”

Hoetker believes there is no time to waste in acting on sustainability.

“If you look ahead, in five years the approach to recycling plastics will have changed. Governments will regulate it, customers and employees will demand it and competitors will be doing it. Starting to make changes now may seem risky, but it actually avoids having to rush through changes only when regulation or consumer demand forces you to do so.”