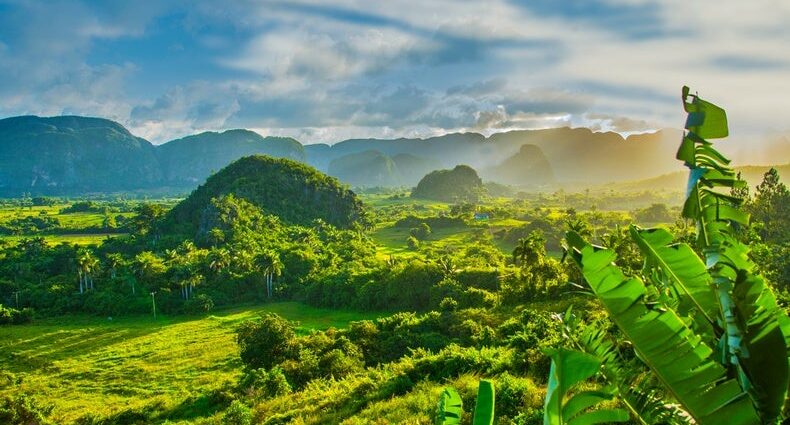 From corn to coal to cannabis, cultures and economies are shaped by their surrounding ecology. Nations have been built on tobacco, communities defined by migrating salmon, and wars fought in the name of spices.

Political and economic decisions can also alter a region’s ecology. Post-Columbian maritime trade initiated the accidental and intentional redistribution of plants, animals, bacteria and viruses, which continues to this day. Ecological changes spurred by politics can also be positive; for example, wildlife thrives in the demilitarized zone (DMZ) between North and South Korea.

Cuba is among the largest and most biodiverse islands in the world. Islands are hotspots of diversity and endemism, but they are also hotbeds of nonnative species—those far from their evolutionary home. One in three plant species on islands are typically nonnative, and bigger islands with a range of habitats and native plant diversity foster the most nonnatives.

Our team of U.S. and Cuban scientists, however, documented that Cuba hosts far fewer nonnative plants than expected. It lacks 177 nonnative plant species present on other Caribbean islands, despite the unparalleled and well-documented range of tropical habitats contained on the Cuban archipelago, which comprises over a third of the land area and more than half of the islands in the Caribbean.

Only one in eight plant species found in Cuba originated elsewhere, less than half the global average for islands. It supports about the same number of nonnative species as much smaller and less habitat-rich islands, such as Puerto Rico—a tenth its size. Cuba also has fewer nonnative reptile and amphibian species than neighboring islands.

Cuba’s economic self-sufficiency may be the inadvertent mechanism that limited introduction of nonnative species. The worldwide spread of such species is largely a biproduct of the exchange of merchandise and services, which accelerated globally post-1960s just as Cuba’s economy became increasingly closed. Although the establishment of nonnative species has increased over the past two centuries, invasion rates are highest in the last quarter century. In those recent decades, Cuba imported less than 20 percent of its gross domestic product (GDP), half the expectation for an island nation of its size. Cuba is the least import-dependent island in the Caribbean; the only island without a dominant U.S.-based import market; and the least connected to inter-Caribbean trade.

Many Caribbean island economies are powered by tourism. Tens of millions of visitors, along with the goods that support them, move to and among the islands each year. Here, too, Cuba is an outlier in the Caribbean. Proportionally fewer visitors arrive in Cuba now than in the 1950s, and Cuba is excluded from the predominant US-based market, including Caribbean cruises that move nearly as many tourists as airplanes. Although international trade is more commonly implicated as the vector for nonnative species introductions, tourism is an essential factor in understanding nonnative species patterns.

On the dozens of Caribbean islands that we studied, Cuba included, tourism combined with island area explained 90 percent of the pattern in nonnative plant occurrence. Larger islands with more tourists per unit area had the most nonnative species. Trade was negligible—surprisingly so—in explaining invasion patterns. Tourists can directly transport plants and seeds in their luggage and footwear. Food and other goods for tourists can also encourage nonnative species and hitchhiking pests. Nonnative species are routinely planted for landscaping at hotels and other tourism infrastructure, and a recent study found that half of the invasive plants in the Caribbean were intentionally introduced for ornamental purposes.

Notwithstanding its past, Cuba is susceptible to future invasions. To the extent that its economic isolation provides an unintended defense from nonnative species, the expansion of tourism and trade may renew pathways for species to arrive and thrive. Cuba’s recent investment in the tourism sector has already increased visitors, and policy directives and port expansions will bring more trade. Cuba’s geography and native ecology predict the capacity of the island to support many more nonnative plants. The eminent spread and the deleterious impacts of nonnative species threaten the immense biodiversity of Cuba and the Caribbean, which is the very foundation of the region’s ecological stability and an attraction to tourists.

As the Cuban political leadership transitions to a new generation, and with prospects of thawing U.S.-Cuban relations, now is the time to consider shared policies between the countries to limit future exchange of nonnative species. As botanist and explorer Joseph Banks wrote during the Napoleonic Wars, “The science of two nations may be at peace while their politics are at war.” To that end, scientists and natural resource managers can identify species at most risk to establish in Cuba and also move from Cuba to the U.S. mainland and Puerto Rico. When U.S. conflicts with China and Vietnam were resolved, more pests were intercepted in cargo originating from these countries at U.S. borders, which is both a cautionary tale and support for the importance of biosecurity measures. With normalizing economic policies, best practices that intentionally stem invasions, such as those used by New Zealand, South Africa and Hawaii, will be important.

Islands are shaped by the oceans that isolate them, as economies and cultures are defined by their surrounding ecology. Those forces collide in the Caribbean, where islands have long been influenced by peripheral economies, including European colonization and slave-supported agriculture for tobacco and nonnative sugarcane. Contemporary tourism and trade continue the reciprocal linkage between an island’s environment and the culture, economy and politics of its people. The nonnative plant communities on Caribbean islands, as elsewhere, result from centuries of human influence and natural processes, which collectively demonstrate that forward-thinking policy can help conserve the ecology of the Caribbean as it responds to changing political, biological and climatic forces.

This is an opinion and analysis article.

2021-05-21
Previous Post: Is Baidu Stock a Buy?
Next Post: The 4A’s Welcomes Kyle Allen, Michelle Headley, and Helen Lin to its Board of Directors