The technology that could stop the use of plastic mulch 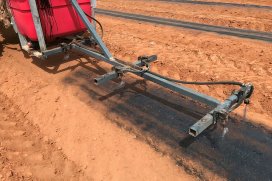 The new technology, named TranspiratiONal, is an environmentally-friendly alternative for agricultural plastics, such as polyethylene, often called plastic mulch. Trials have confirmed increases in crop water productivity in excess of 30 per cent, while also assisting to control weeds.

According to CSIRO there is a worldwide challenge to grow more food, using less resources. “The world’s population is growing, requiring food production to double by 2050 to feed an expected nine billion people. The need to expand our food production output is also impacting the environment through the use of fertilisers and other chemicals”, CSIRO says.


Close up of the spray rig showing 3 sets of nozzles spaced one meter apart to improve the uniformity of application (1 kg per square meter treatment) – Photo: CSIRO

Researcher Dr Keith L. Bristow came up with the idea of a polymer membrane. “I had been doing a lot of work around the health of soils, and the interaction of water with the soil”, he says. “I went to China some time ago and was just horrified by the plastic mulch films they were using. We visited some fields where plastic was more dominant than the soil. This means the soil pores were mostly blocked and toxins were leaking into the soil and surrounding water systems.”


My view was that all farmers should be able to apply the membrane, even those in Africa using a simple hand sprayer

Dr Bristow set out to create a product that could replace the plastic mulch films. He wanted to produce a biodegradable product, that could be sprayed. “My view was that all farmers should be able to apply the membrane, even those in Africa using a simple hand sprayer or those in the US, using large mechanical machines”, he explains.

After developing the membrane technology, CSIRO conducted several experiments and field trials in Australia. “We used big and small farm equipment and proved that our polymer membrane can be accessible to small scale farmers in developing countries and large scale highly mechanised farmers and agribusinesses in developed countries”, Dr Bristow says.


Application of the membrane of a field of tomatoes. – Photo: CSIRO

“We‘ve got our proof of concept but we need to further finetune the polymer spray”, Dr Bristow says. “We want to make it as durable and cost effective as possible. At the moment the cost is probably higher than the plastic mulch film that is widely used.”

Farmers have told Dr Bristow and his team that they would no longer use plastic mulch film if they could use a cost effective sprayable biodegradable polymer membrane. “By using a sprayable biodegradable membrane they don’t have to retrieve a deteriorating plastic mulch film during and after harvest”, Dr Bristow says. “And a lot of the plastic mulch film is still causing problems. It gets burned, which the government and community don’t like, or it goes to a waste facility. And when it breaks down into smaller fragments it releases toxins into the soil and our water systems, including, streams, rivers and groundwater below.”

The farmers in the trials were in general happy with the ability of the polymer membrane to cover the soil. Weeds were controlled and water was saved, resulting in more production. “Our aim is to maximise the transpiration and minimise the soil evaporation”, Dr Bristow emphasises.


A field with tomatoes sprayed with a polymer treatment. – Photo: CSIRO

Plastic mulch films can cause extreme surface temperatures. The application of the polymer membrane however moderates the soil surface temperatures. The trials showed that plastic mulch films caused seedling damage and death of plants. The use of the polymer membrane caused minimal to no damage to seedlings.

Polymer membrane safe to use

Dr Bristow and his team have made sure that the polymer membrane is safe to use. “We took samples of the soil with the polymer and of the products, for example the skin of melons”, he says. “We probably did a couple of hundred different tests. The results proved that there was nothing untoward or toxic in the product and that it is biodegradable. Farmers can just leave in the field after harvest.”

Dr Bristow would prefer to do some pre‐commercial farm trials to finetune the polymer formulation, its application and impact. He is currently talking with investors to finish the last phase of the emphasises. “We pre-commercial trials. There is enough interest from farmers. “I get contacted every week by farmers, sometimes six times a week. People are calling me from across the world.”

Free up more than 1,000 gigalitres of water

CSIRO explains that achieving the initial target of using 10 per cent less water with no yield loss in Australian irrigated agriculture would free up more than 1,000 gigalitres of water. “This could be used for growing additional crops and/or improving environmental flows in our waterways”, CSIRO says.

Farmer Dan Harris of Myrtle Park Produce in Finley, New South Wales was a participant in field trials with the sprayable biodegradable polymer membrane. “If this was available, I would use it for sure”, he says.
Mr Harris says spraying the polymer membrane onto the soil was an easy process. “We put the polymer in a tank behind a tractor and applied the polymer with nozzles onto the ground“
The farmer from New South Wales enjoyed being involved in the trials. “There was a bit of an issue with the manufacturing at the start, but once that was ironed out, it was fine. In the first year we tried out different rates of polymer per square meter. That made it clear what thickness we needed. I thought it showed a lot of potential at the higher rate of 1 kg per square meter.“
In the second field trial Mr Harris grew a crop of melons, using the polymer membrane. “It did increase the crop water productivity and supressed weeds. And I could leave the polymer on the soil and it just broke down.” I was keen to pursue it but unfortunately the funding dried up.“
Mr Harris says he would use the new technology instead of plastic mulch films if it was available. “It’s the flexibility; and not having to deal with plastic. We are laying plastic but then have to retrieve it and dispose of it, which is a real headache. And it’s costly. If we could just spray the membrane, I‘d be happy to pay twice as much as the plastic film mulch cost. Although the cheaper the better of course…“
He points out that using plastic mulch film also comes at a public cost. “It’s not great for the environment and not a good long term solution for our industry. Hopefully they can get the polymer membrane off the ground. It is a great innovation. A few farmers will shy away from it at the start but once you show them how flexible and easy it is, they will come around.”


Farmer Dan Harris of Myrtle Park Produce in Finley, New South Wales was a participant in field trials with the sprayable biodegradable polymer membrane. “If this was available, I would use it for sure”, he says. – Photo: Dan Harris