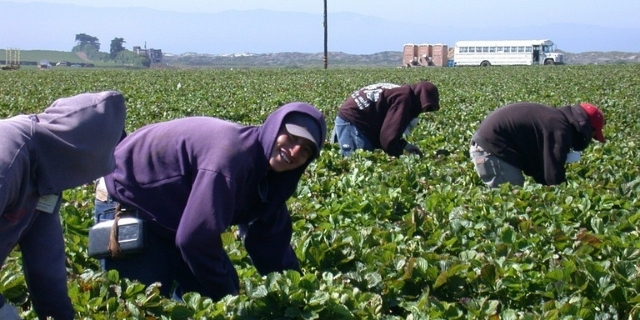 (Beyond Pesticides, June 25, 2021) A consequential report from the White House Environmental Justice Advisory Council (WHEJAC) sets out important and comprehensive recommendations that, if enacted, would put environmental justice on the front burner of national policy. The report spells out a multitude of challenges, and recommendations for addressing them, in service of advancing environmental justice (EJ) across federal agencies. Notably, the U.S. Environmental Protection Agency (EPA) is called out for, among other things, poor protection of farmworkers and their families, who tend to be people of color, from pesticide risks. The report arises from President Biden’s late January 2021 Executive Orders (covered by Beyond Pesticides here) on: (1) tackling the climate crisis with a “whole of government” approach, with an explicit focus on EJ, and (2) recalibrating the functions of the Office of Management and Budget (OMB) to “forward health, racial equity, and environmental stewardship.”

That early 2021 Executive Order (EO) on climate established the WHEJAC and the Justice40 Initiative, the latter of which aims to direct 40% of some categories of federal investment to historically under-served communities. Those investments, as reported by AgriPulse, would promote “clean energy and energy efficiency; clean transit; affordable and sustainable housing; training and workforce development; the remediation and reduction of legacy pollution; and the development of critical clean water infrastructure.”

The Executive Order on the OMB charged the agency’s director with providing to the administration “concrete suggestions on how the regulatory review process can promote public health and safety, economic growth, social welfare, racial justice, environmental stewardship, human dignity, equity, and the interests of future generations. The recommendations should also include proposals that would ensure that regulatory review serves as a tool to affirmatively promote regulations that advance these values.”

Of particular note is language, throughout the report, that acknowledges the role of historic and current systemic racism as it has manifested in “disproportionate harm from environmental contaminants and . . . disproportionate risks from climate change” for disadvantaged communities. It says plainly (in Section 101), “Historically, the Federal Government has taken actions that have perpetuated, institutionalized, or defended injustices that resulted in inequality in exposure to hazardous substances and unequal access to clean water, clean air, healthy food, safe housing, transportation, and other environmental benefits.”

The document also addresses stakeholder involvement, going straight to the point of the adage, “If you are not at the table, you are probably on the menu.” For example, in Part II “meaningful participation” is described: “potentially affected populations have an opportunity to participate in decisions that will affect their health or environment, that the population’s contributions can influence the agency’s decisions, that the viewpoints of all participants involved will be considered in the decision-making process, and that the agency will seek out and facilitate the involvement of the population potentially affected.” The contrast with written products of the prior administration is head-spinning.

The report integrates many recommendations of the Justice40 Initiative, including specifics on, among others:

The WHEJAC report also takes up problems and concerns specific to farmworkers, their families, and their communities on several fronts, including many related to pesticide risks. Recommendations include:

Response to the report has been positive in the advocate community. EarthJustice reported a statement from the co-authors of the Equitable and Just National Climate Platform: “The White House Environmental Justice Advisory Council has made an important and historic contribution to advancing environmental justice and protecting overburdened communities from dangerous pollution and harm from climate change. Its recommendations provide a roadmap for President Biden to make progress on environmental, racial, and economic justice and to ensure that at least 40% of federal climate and clean energy investments reach frontline communities. White House officials and federal agencies should immediately incorporate these recommendations to guide the implementation of Justice40 and the President’s other environmental justice commitments to address the disproportionate levels of pollution, chronic disinvestment, and lack of access to capital and economic opportunities in Black, Latinx, Indigenous, and low-income communities burdened by systemic racism and discriminatory federal policies.”

“The report and recommendations recognize disproportionate risk from toxic chemicals to people of color communities and the failure of statutory and regulatory policy to incorporate these elevated risk factors into allowable use patterns of pesticides and other toxic chemicals,” said Jay Feldman, executive director of Beyond Pesticides.

At least one agricultural organization has taken some umbrage at the report’s commentary on farmworker health and safety recommendations. As reported by AgriPulse, Michael Marsh, CEO of the National Council of Agricultural Employers, commented that some recommendations, such as “access to field sanitation and hand-washing facilities, training in use of and provision of protective equipment for pesticide application, (and) heat stress prevention plans,” have already been implemented by farmers and ranchers for years. “Farmers take the health and safety of their workforce very seriously and it is in the farmer’s self-interest to do so,” he added.

Another industry trade group is displeased with the report, given its relative cold shoulder regarding biofuels. AgriPulse reported the comment of Renewable Fuels Association President and CEO Geoff Cooper: It is “surprising and disappointing that the advisory committee overlooked the benefits of renewable fuels. . . . Ethanol reduces the harmful tailpipe pollution that disproportionately affects low-income and disadvantaged communities, and it slashes the greenhouse gas emissions that are contributing to climate change. In addition, the increased use of ethanol reduces demand for petroleum fuels, which are often manufactured at large industrial refining complexes adjacent to, or in the middle of, urban and suburban neighborhoods.”

Advocate Michele Roberts, Environmental Justice Health Alliance and WHEJAC member, had this to say: “The voices of the communities that have suffered for too long from legacies of pollution and inequality are finally being heard. Through the White House Environmental Justice Advisory Council, we finally have the seat at the table that we deserve. We know how to remedy the problems that have been placed in our communities, and our recommendations should form the foundation from which the Biden-Harris administration builds its policies to correct environmental, economic, and climate injustice.”

Moving recommendations from words on paper to concrete actions is where the rubber hits the road. Senior Fellow for Energy and Environment at the Center for American Progress, Cathleen Kelly, said, “There’s going to have to be a lot of focus on strengthening federal investment programs across all of the agencies to make sure that they can actually deliver real and direct benefits to disadvantaged communities.” To that end, AgriPulse adds, Brenda Mallory (chair of the Council on Environmental Quality), Gina McCarthy (National Climate Adviser), and Shalanda Young (Acting Director of OMB) are expected to publish recommendations on the nitty-gritty of how to get that 40% of federal investment to target communities.

Beyond Pesticides, which has long advocated on behalf of farmworkers, welcomes the report’s attention to farmworker, pesticide, and equity issues in particular, as well as the plethora of recommendations that would begin to put EPA on a more protective track. A significant part of addressing the toxic chemicals, climate, and equity crises will be the transition — which cannot happen quickly enough — from currently dominant petrochemical-dependent agricultural and land management practices to organic, regenerative ones that build in agricultural and environmental justice protections.

Such systems would end the poisoning of farmworkers, their families, and landscape workers; protect public health, the environment, and biodiversity; and reduce greenhouse gas emissions, sequestering far more carbon than conventional agriculture can. The shift from a petroleum-based economy, including the agricultural economy, to a much-less-toxic “green” economy would provide myriad benefits across many sectors, including for fenceline communities that have borne the overwhelming brunt of inequities. Environmental justice is an inextricable part of environmental advocacy. Please join Beyond Pesticides in this work.

All unattributed positions and opinions in this piece are those of Beyond Pesticides.