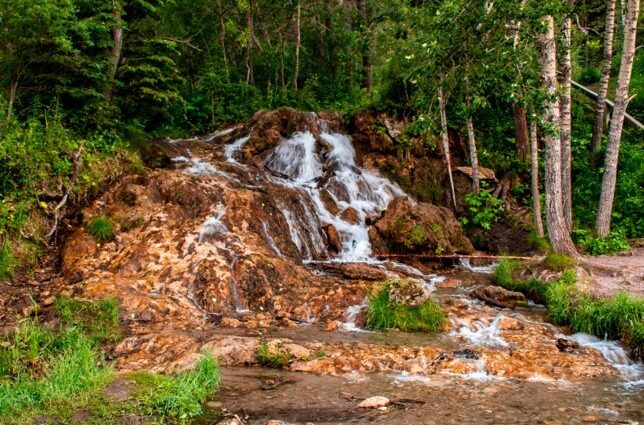 At a public hearing on March 2, Rocky View County (RVC) council voted 6-3 in favour of an application from Mountain Ash LP to develop a gravel pit near the provincial park. The application will see a more than 320-acre gravel pit established in a quarry located approximately 300 metres away from Big Hill Spring’s creek underground headwaters, and 1,200 metres from the park’s boundary.

The vote in favour of the application came despite most public submissions at the public hearing being opposed to the gravel pit. As well, a letter from Alberta Environment and Parks officials urged council to delay the decision until a thorough environmental review could be conducted.

“As the Big Hill Springs are so closely linked to the groundwater at the Mountain Ash site, we question the proposal’s potential impact on groundwater quality and spring chemistry, effects on tufa formation, and its effects on fish and fish habitat,” the letter from Parks officials stated.

According to Mountain Ash’s website about the project, on-site operations will include the stripping of topsoil and overburden materials, mining the underlying sand and gravel and eventually reclaiming disturbed areas. A portable scale will be installed at the entrance to the site along Range Road 40, according to the company, south of the intersection with Highway 567.

“All sand and gravel will be excavated by a front-end loader and fed into a portable crushing and screening spread that will operate within the site as demand for gravel occurs,” the site stated. “Aggregate product will be loaded onto trucks from the stockpiles to be conveyed through the scale house prior to being hauled to regional markets.”

The site went on to state aggregate products will be crushed, screened and shipped to markets around Balzac, Calgary International Airport and north Calgary growth areas. According to Mountain Ash, the company anticipates a 30-to-40-year operating period, depending on market conditions.

“Development permit approvals will be required to support each phase of the proposed aggregate operations,” the site stated.

Since the public hearing in the spring, environmental advocates in northwest RVC have launched an information campaign to speak out against the gravel pit. On May 28, RVC resident Aynsley Foss created an e-petition calling on the Alberta government to “Save Big Hill Springs Provincial Park.”

The petition is directed at RVC Division 3 councillor Kevin Hansen, Minister of Environment and Parks Jason Nixon, Airdrie-Cochrane MLA Peter Guthrie, and other members of the Alberta government’s parks department. As of July 2, it had garnered nearly 10,000 online signatures.

“The park is considered one of Canada’s top springs, and is host to a fish hatchery, species at risk, unique tufa mineral features, hiking trails and picnic areas,” stated the e-petition’s description. “Given its close proximity to Calgary, Cochrane, and Airdrie, the park is regularly used by locals, and welcomes 250,000 visitors a year. In 2020, the province made significant upgrades to park, which are now compromised by proposed gravel extraction.”

In addition to the petition, Foss said members of the Save Big Hill Springs Provincial Park group have distributed leaflets around Cochrane-area parks and ordered roadside banners, which have been set up at sites along Highway 22 and Highway 1A. The group has also created social media pages to further get their message out.

Foss said the group’s goal is to ensure no large-scale industrial development occurs near the park. She added the Mountain Ash application is not the only proposed gravel pit that would threaten the park’s groundwater, as other developments have been proposed in Big Hill Springs Provincial Park’s proximity in recent years.

“There are actually gravel pits proposed right behind the park,” she said. “The cumulative impacts are not fully understood if all these gravel pits ensue. As well, there is already a gravel pit next door – there is enough gravel to sustain the region and regional expansion for 47 years if a lot of expansion happens and 147 years if there is very little expansion. We have tons of resources to sustain regional development.”

When reached for comment, Airdrie-Cochrane MLA Peter Guthrie’s constituency office issued a statement to the Rocky View Weekly on June 30 about the resident opposition to the gravel pit, saying to date, Mountain Ash has yet to submit an application for approval or licence under Alberta’s Water Act or Environmental Protection and Enhancement Act.

“As no application has been submitted to the ministry for review, it is premature to comment on the specifics of the proposed project,” he said. “Alberta has stringent environmental safeguards in place and I am confident, upon receiving [Mountain Ash’s] application, the ministry will scrutinize the project’s merits and decide accordingly.”

That said, he added he has appreciated hearing the concerns raised by residents about the project.

“It is important to note that land-use decisions by the County and decisions under the Water Act and Environmental Protection and Enhancement Act are completely independent and may draw different conclusions based on the various factors being considered,” he said.

In a statement, RVC said it would not be commenting further on the Mountain Ash application, as it has already gone through council.

“The matter was dealt with at a public hearing, and the decision reached by council represents the County’s position,” the statement read. “We have no further comments at this time.”

However, the topic of the Mountain Ash gravel pit will return to RVC council on July 13, when members discuss the project’s development permit. Foss said she is encouraging residents to tune into that meeting.

In response to resident opposition to the project, Mountain Ash issued a statement to the Rocky View Weekly on July 2, stating the company acknowledges and shares local interest in protecting groundwater resources in Bighill Creek

“Mountain Ash has conducted detailed hydrological studies to ensure its Summit Pit would have no measurable impact on Big Hill Springs or [Bighill Creek], which resulted in Alberta Environment and Parks comment, ‘Summit’s hydrological assessment is the best I’ve seen for all proposals in the area.’

“[Mountain Ash] also has a well monitoring program in place, which involves 11 wells on site and five wells on neighbours’ properties as part of its Good Neighbour Action Plan.”

To read more about Mountain Ash’s project and mitigation measures the company says it is taking, including air quality, dust, noise, habitat preservation, sediment and erosion control, visit bit.ly/3hnDK0G or watch a video of the project’s phases at bit.ly/3qC8Fui

2021-07-05
Previous Post: Questions and Answers: the EU Code of Conduct on Responsible Food Business and Marketing Practices – The European Sting – Critical News & Insights on European Politics, Economy, Foreign Affairs, Business & Technology
Next Post: Why experts believe the plastic in our oceans may have changed the planet forever