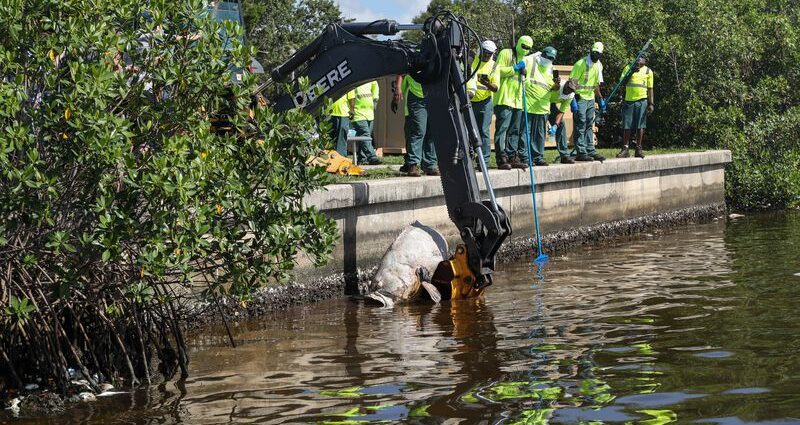 ST. PETERSBURG — Mayor Rick Kriseman said the city is straining its resources to pick up dead sea life from the current Red Tide crisis and called for more help from the state and Gov. Ron DeSantis.

“Our city teams can only keep at this for so long,” he said during a Wednesday news conference held in waterfront Crisp Park, next to a crew scooping dead fish with pool skimmers. He recalled how former Gov. Rick Scott declared a state of emergency in 2018 to free up resources when toxic Red Tide afflicted the west coast of Florida.

“We are asking the governor, please … we need your help,” Kriseman said.

Hours later, he got a rebuke from Tallahassee.

“Mayor Kriseman is either unaware of what is actually going on in his own backyard or is deliberately lying and using Red Tide as an attempt to score cheap political points,” read a statement from governor’s spokesman Jared Williams.

The 2018 emergency declaration was necessary because “a dedicated funding source did not exist,” Williams said. “That is not the case now.” The Florida Department of Environmental Protection funds grants to help counties, he said, and it is unnecessary for the governor to declare an emergency.

Pinellas Public Works Director Kelli Hammer Levy said she has been in contact with the interim environmental secretary and his chief of staff to secure state aid. The governor’s office said the state will provide $902,500 to cover clean-up costs for the county and city and will continue helping with future expenses. The state is working on a similar agreement with Hillsborough and has promised about $75,000 to Pinellas, Hillsborough and Manatee counties to cover water sampling.

“Mayor Kriseman is not concerned with the mechanism by which our city receives assistance, as long as it comes,” Kirby said. A council member and a city lobbyist have reached out to the governor’s office, with the first request July 9, according to the mayor and his spokesman. The mayor’s office said it had not heard back by Wednesday.

Related: Along St. Petersburg’s waterfront, the park is quiet but the smell is strong

The governor’s office disputed some of those statements, saying it has been in touch with two unnamed council members since the weekend and that a lobbyist reached out Wednesday on behalf of the city. But DeSantis’ office said it has no record of Kriseman himself reaching out.

Meanwhile the calamity and clean-up bore on: At least 676 tons of dead marine life was gathered throughout Pinellas County by noon Wednesday, Levy said. More than 470 million of that came from around St. Petersburg.

Carcasses plucked from the water are burned at a waste to energy facility to make electricity, Levy said. Dead fish coated in sand and dirt from the ground are dumped at a landfill. Pinellas County spent more than $1 million on its response from June 11 through early this week.

“Our burn rate is somewhere around 100 grand a day,” Levy said.

This clean-up is more challenging than the 2018 bloom, when Red Tide drifted in from the Gulf of Mexico and left dead fish piled on the beaches. More fish are floating through Tampa Bay and the Intracoastal Waterway, moving into narrow canals where they get trapped under docks and mixed up with riprap. Dead catfish may get entangled in small nets and skimmers, Kriseman said, while workers deploy grabber tools to reach carcasses trapped under mangroves.

Roughly 200 St. Petersburg employees are helping, according to the city, which has pulled attention away from regular duties like mowing parks, repairing sidewalks and cleaning gutters.

Eleven boats were combing the water for dead sea animals across Pinellas, Levy said. Four were shrimp boats: two in St. Petersburg, one near Treasure Island and another around Fort De Soto. She expects the county will have to double its effort to keep up with all the decaying fish.

Removing the rotting sea life is a priority because it releases nutrients back into the water, giving the toxic bloom even more fuel.

“You can’t get a handle on Red Tide. You can’t control it,” Levy said. “When will it stop? We don’t know. … It’s going to be a really long summer and a really long fall if this doesn’t stop before then.”

Water samples have shown high levels of Red Tide not just at the surface of the bay but also deeper, she said, which means many plant and animal species are being harmed. Seagrasses, a cornerstone of the bay’s ecology that offer food and habitat, are dying as dark water shades the sun and dissolved oxygen levels plummet, Levy said.

The bloom has frustrated residents of waterfront neighborhoods. At a meeting Tuesday led by the environmental organizations Captains for Clean Water and Tampa Bay Waterkeeper, some complained of brown water and putrid air.

Vahan Takoushian, 43, said he bought a million-dollar home in Redington Shores and a boat three years ago to move from New York City. When a Red Tide bloom passed then, he thought he had seen the worst.

“Maybe I should have gone to Panama or went to Costa Rica somewhere,” he said. “The water’s disgusting. I feel like I’m back on the East River.”

Walking through Vinoy Park on Wednesday, Harvey Moore, 73, watched an excavator drag heaps of dead fish from the bay.

“I’ve lived here my whole life, and this is the worst I’ve ever seen it,” he said. “This is just a disaster.”

Florida’s top environmental officials visited the region this week and traveled on a boat to see the toxic bloom up close. Florida Fish and Wildlife Conservation Commission Executive Director Eric Sutton said he has heard angst from local leaders.

“This community has worked hard over the years to get Tampa Bay back to good conditions, so a lot of folks will see this as a setback,” Sutton told the Tampa Bay Times. “But I’m optimistic this will be only for the short-term.”

While Kriseman wrapped his news conference Wednesday, workers in Crisp Park gathered around a carcass, approximately a few feet long, floating along the seawall. Bloated and gray, it was a goliath grouper — likely a juvenile. Mature adults of the species can grow up to 8 feet and weigh as much as 800 pounds.

The fish were once targeted by anglers. People off Florida have been blocked from keeping them since 1990, according to the Fish and Wildlife Conservation Commission.

The workers stared. They said it was not the first dead goliath they had come across this summer.