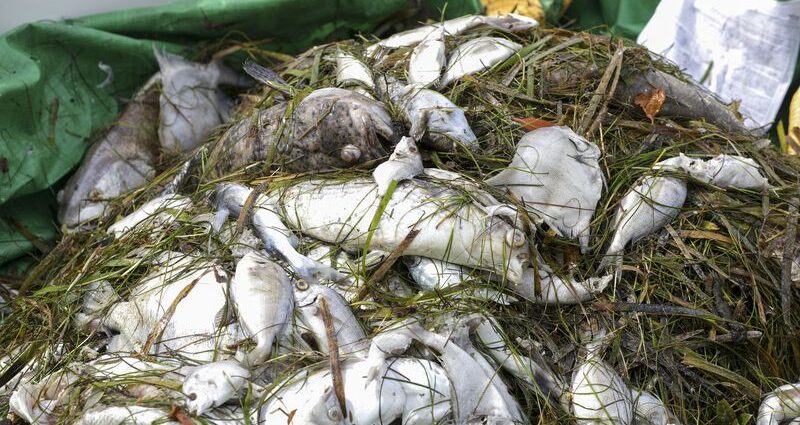 The state has imposed new restrictions on redfish, trout and snook fishing across Tampa Bay because of the current toxic algal bloom, just two months after it lifted years-long limits imposed the last time a Red Tide devastated the region.

The Florida Fish and Wildlife Conservation Commission announced Friday that the three species will be catch-and-release only in both Pinellas and Hillsborough counties (excluding the Anclote River and its tributaries) through Sept. 16 at least. Snook was already under a regular seasonal closure for much of the summer.

“While it’s unfortunate that we must do this so close to the recent reopening of these species to harvest in this area, we know temporary catch-and-release measures such as these are successful in keeping fisheries sustainable throughout Red Tide events such as this one,” said a statement from agency director Eric Sutton. The closure also touches water north of State Road 64 in Manatee County, except Palma Sola Bay.

The prohibition is intended to protect populations of some saltwater fish that are being killed in Tampa Bay and along the Pinellas coast. Hundreds of tons of dead sea life have washed up over the last month.

“The stocks are just on the rebound and now they’re being smashed again,” said Capt. Tyler Kapela, a guide who made a viral video on Instagram in which he stands up from a pile of dead fish to criticize government officials for not doing more to curb pollution that fuels toxic algal blooms. “This is going to affect the fishery for years and years.”

Some local anglers said they were unsurprised by the closure. They expect it will be extended months or years beyond this coming September.

“I can’t see them only doing it for a little while. This issue’s not nearly complete yet,” said Dave Walker, a former fishing guide who wrote the Captain’s Corner feature in the Tampa Bay Times and is today a marine consultant. He recalled seeing a picture of a dead goliath grouper loaded into a dumpster with a backhoe.

“It sickens my stomach,” Walker said.

Redfish, trout and snook are staples of Tampa Bay’s inshore fishery. Fishing for all three was limited to catch-and-release after a persistent Red Tide bloom afflicted the Gulf of Mexico from 2017-2019, and prohibitions remain for some counties and bays in Southwest Florida. The state imposed restrictions here beginning in September 2018. But in May the Conservation Commission decided to open up Tampa Bay, finding that it was not hit as hard by the last bloom as other areas.

The die-off is coming at a particularly bad time for snook, guides said, because the fish are moving into passes to spawn. Captains have reported finding big breeder snook floating dead, still loaded with eggs.

“There is dead fish as far as you can see in every direction,” Kapela said.

Red Tide has affected Tampa Bay and the Pinellas beaches for several weeks. The epicenter of the crisis is St. Petersburg’s eastern shore. Pinellas reported Thursday that 791 tons of dead marine life and debris had been picked up. High levels of Red Tide are being detected as far south as Sarasota, according to the state.

St. Petersburg Mayor Rick Kriseman, the City Council and Agriculture Commissioner Nikki Fried have all called on Gov. Ron DeSantis to declare a state of emergency or issue an executive order to address the crisis. Fried is a Democrat challenging DeSantis, a Republican, for governor in 2022.

DeSantis’ office has said a state of emergency is not necessary because the Department of Environmental Protection holds a dedicated funding source to help pay for the response. It has already offered nearly a million dollars to Pinellas County and St. Petersburg to cover the mounting bill.

Kriseman late Friday wrote on Facebook that his administration had a meeting with state environmental officials and county officials, and he reported that Pinellas will provide “more boots and boats” with money coming from the state.

Kapela said responding to Red Tide with fishing restrictions can only be so effective if damaging blooms keep happening. “The regulations don’t mean anything if every few years the fish are just going to die again,” he said.

For more information about saltwater fishing in Florida, visit myfwc.com/fishing/saltwater/.