Sir Kn8 and Hila the Killa merge the musicality of rap with ecology to promote sustainability.

At their core, Nathan Dufour Oglesby and Hila Perry are working towards a world where every city dweller has access to a roof to grow their own food and every person has an appreciation for the life that surrounds them.

But in order to get there, the pair of musically inclined eco-activists, who create raps and music videos under the monikers Sir Kn8 and Hila the Killa, believe that we need to tackle the very root of climate change — humans’ ongoing mistreatment of, and lack of respect for, the planet — as well as its potentially devastating consequences.

“The true transformation comes at the point of like, regardless of sea levels swallowing human cities, you need to have a non-human-centric love for the other organisms in your ecosystem, for the actual place you’re in,” Nate tells Global Citizen. “You have to aim at the root, rather than just at the growth, of the problem.”

“I guess for me [the Earth] just feels like the glue that holds everything together. Without the health of our planet and our environment, there is nothing else,” Hila adds.

While much of the conversation about the need for climate action points to the catastrophic effects climate change will have, and is already having, on humans, Nate and Hila focus their activism on teaching people about the beauty of nature and why it’s worth saving in its own right. And they do it in seriously funny ways.

Take their album, Naughty for Nature. On the surface, it’s a collection of raunchy songs exploring the mating habits of animals. But dig deeper and each song will reveal a genuine curiosity for how the world’s species interconnect and mirror one another, from procreating to having a hand in the food system. 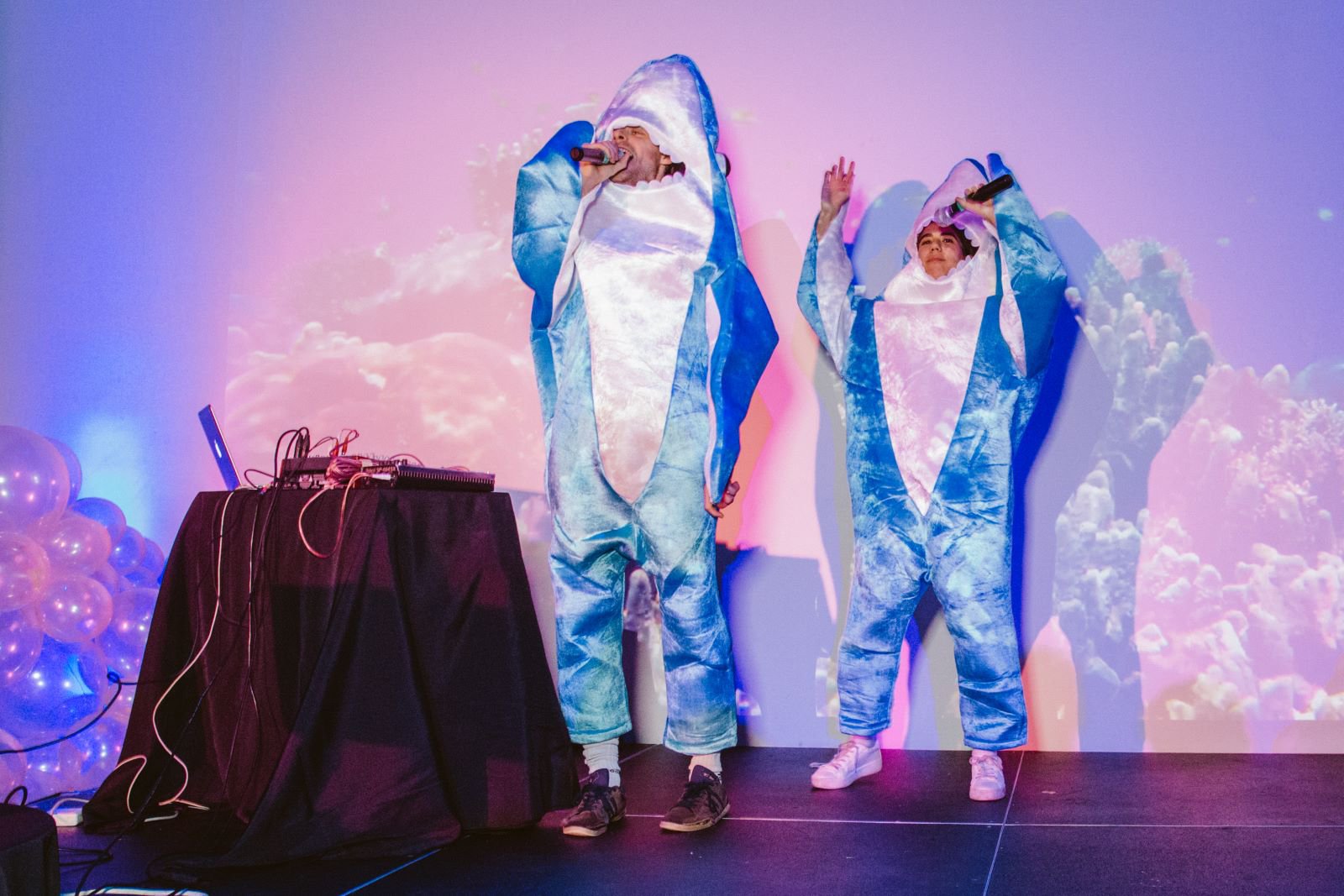 Nate and Hila perform songs from their album “Naughty for Nature” at House of Yes in Brooklyn, New York.
Image: Kenny Rodriguez

With backgrounds in music, Nate and Hila met while performing as solo acts at various venues in New York City. The decision to focus on eco-content was organic, arising from a shared interest in environmentalism. For Hila, rapping about how we can all learn to respect the planet we live on felt like a natural next step in her personal journey.

“I grew up in New York City so I am just arriving at the wonders of nature and plants, encountering them for the first time,” Hila tells Global Citizen. “It’s really exciting for me to fall in love with how other lifeforms exist with me.”

For Nate, the seeds of environmentalism were planted as he completed his dissertation in philosophy, which explored the idea of the planet as a living organism. Nate then got involved in the zero waste lifestyle through Hila and learned more about how individuals can take steps to reduce the harmful effects of human activities on the environment.

Identifying the Earth as the center for everything is at the heart of the duo’s craft. Whether they’re spitting bars about how to go plastic free or identifying climate solutions for government leaders to implement, everything comes back to their holistic love for the environment.

“There’s a lot of things that converge, like Hila got into zero waste as a practice and then that coincided with some stuff I was working on for my doctoral degree and applied to [our music] as well,” says Nate. “Like what else can you do to try and care for this living thing of which you’re a part. Whether or not you accept the premise [that the Earth is a living organism], I find it very compelling.”

More people than ever are raising their voices right now for urgent climate action to defend the planet. According to a 2021 poll conducted by the United Nations Development Programme (UNDP) and University of Oxford, 64% of respondents from over 50 countries said they believe climate change is a global emergency.

But when it comes to turning these beliefs into tangible action, that’s where environmental advocacy can get tricky.

First and foremost, governments and corporations need to implement policies to avoid a 1.5 to 2 degrees Celsius rise in global temperatures above pre-industrial levels. This can be done, in part, by ending reliance on fossil fuels, pursuing renewable energies, and changing policies that result in environmental damage.

But in addition to applying pressure on the world’s decision-makers to take the urgent need for action seriously, individual people can do their part to lower their carbon footprints, too.

“We always say it’s both. We think that personal action will influence corporations and governments,” says Hila. “At the end of the day, these bigger organizations are made up of individual people. The more individual people are aligned in our philosophies and ideologies around how we best interact with the materials of our world, the more effective we can be as a group.”

“If we hit a critical mass of people saying we don’t want single-use plastics in our lives, it’s just not going to be profitable for anyone to produce them and to put them out there,” she adds.

Of the 300 million tons of plastic produced globally each year, half is designed to be used just once and then discarded. Meanwhile, it’s estimated that 79% of plastic waste ends up in landfills or the natural environment. Even though we have these statistics pushing us towards making change, it can be hard to know where to begin to fight plastic pollution at home.

In “I Am Plastic, Man” Nate and Hila illuminate the complex components of plastic and why it takes anywhere from 20 to 1,000 years for plastic to break down into smaller fragments, further harming wildlife and ecosystems. Speaking truth in costumes made of water bottles and plastic bags, they share simple ways that anyone can take a stand against plastic, such as by using a reusable cup.

From “I Am Plastic, Man”

The first step is engaging people through music to inspire them to fight climate change or plastic pollution. Weaving environmentally-friendly actions with clever rhymes and catchy beats sets people up to learn — they’re going to pay attention, especially if they can’t get a line out of their head. The second part of it is making sure their lyrics aren’t preachy but rooted in a genuine desire to share their view of environmental processes as cycles of love.

“The key is to not alienate people because you never know where somebody’s at with this stuff ideologically,” says Nate. “They’re looking for things to be put off by to generate an excuse not to do it. If you’re trying to convince anybody of anything, you have to meet them where they’re at and really do it with love. It’s the most effective way.”

All eco-influencers, or social media personalities who advocate for sustainable lifestyles, emphasize the importance of achieving long-term sustainability through individual actions. But whereas some focus on encouraging the sale of eco-friendly products — such as stainless steel containers and bamboo eating utensils, which can be expensive to purchase up front — Oglseby and Perry thread accessibility into their work.

“We’re more focused on ideas and changing your thinking around [sustainability] and making decisions based on that,” continues Hila. “Everbody’s situation is different, every person who lives in a different place has access to different things.”

They also practice what they preach. Throughout Plastic Free July, a month-long global initiative to discourage the use of single-use plastics, Hila has documented her journey of carrying a reusable cup in her bag on her Instagram account.

When she goes to a bar to meet friends, she asks the bartender if they can pour her drink into her own cup or supply her with a glass one. Sometimes she is given plastic anyway, but that’s okay; taking steps to achieve the zero waste lifestyle is better than not doing anything at all.

“Outside of making the songs and trying to do our best to live a minimal, low-impact consumer lifestyle, we’re also big advocates for being in contact with our local government,” says Hila. “We compost, we’ve been composting forever, and we released our compost song in April.”

For their music video “Compost (feat. DiorNoel),” Nate and Hila donned fruit-themed costumes made of recycled materials and visited 12 composting sites in New York City to help inspire the return of municipal composting, which was at that time discontinued due to the COVID-19 pandemic.

Though New York has since revived its composting program, the music video lives on as the pair wax poetic about food waste. But instead of focusing on the fact that food waste generates 8-10% of greenhouse gas emissions globally, they unravel the mystery of regenerative agriculture.

Your food waste isn’t waste, it actually makes wealth, ‘cause everything is made from what was left from something else. The health of all depends on how a small thing decomposes; don’t throw it all away, let it live again — compost it!

So what’s next for Nate and Hila’s eco-advocacy? Definitely more music, they say, but also taking sustainability off the screen to continue working with organizations and governments at the community level.

“We’ve been really interested in green roofs as one of the greatest solutions for the environmental problems at play in New York City specifically,” says Hila. “So we’ve been thinking about how to create a song and a campaign around green roofs.”

In the meantime, they’re exploring how to further their own journey to zero waste, from ditching plastic altogether, to growing some of their own food. Even though they’re only working with a few crops like tomatoes and cucumbers right now, the process of being in control of what they eat is proving the importance of accessibility, particularly in cities that struggle with access to fresh produce.

“It’s really fun making a little rooftop garden, and we feel like everyone should have access to a little spot somewhere where they can grow something,” says Hila. “It’s one of the coolest things.”

Nate adds: “It should be a right.”

You can join the Global Citizen Live campaign by taking action here to defend the planet and defeat poverty, and become part of a movement powered by citizens around the world who are taking action together with governments, corporations, and philanthropists to make change.