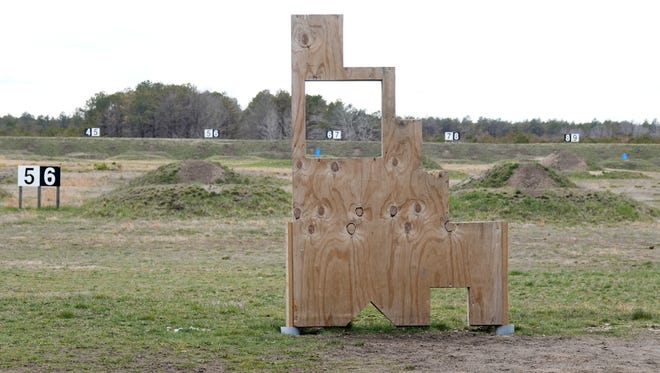 DENNIS — The Association to Preserve Cape Cod is calling on Gov. Charlie Baker to shelve a proposed machine-gun range on the Upper Cape after public records showed the military’s concerns over growing environmental scrutiny.

In one email from March 26, Faux said the military has heard from multiple agencies and has seen numerous news articles about Keating, along with Sens. Elizabeth Warren and Edward Markey, requesting further review of the project from the National Environmental Policy Act in the form of an environmental impact statement.

“If that is the case, we will most likely lose the project and its funding and will have wasted ten years of work,” Faux wrote.

Faux declined to comment, saying in an email Wednesday morning that per protocol, he forwarded the records request to the public affairs office, which has not responded.

The multipurpose machine-gun range, planned for the site of the base’s existing KD, or “known distance” range would sit above the Upper Cape Water Supply Reserve and would cost $11.5 million. The range would be used for military training with different weapons, including machine guns, 12-gauge shotguns, grenade launchers and pistols. The proposal calls for clearing 170 acres of forest and disturbing about 199 acres of land.

The National Guard Bureau approved the project April 30 in an environmental study that found no significant impacts from the gun range, but many residents and organizations have expressed concern about the impact the machine gun range would have on the environment, particularly the Cape’s water supply.

The Environmental Protection Agency will review the proposed machine gun range and the potential risks it may pose to public drinking water, Markey and Warren and Keating announced in August.

Faux wrote in an email to Keating’s office that the Massachusetts National Guard used a fact-based assessment that meticulously followed the NEPA process.

“Comparatively, our adversaries who have yet to provide a single fact that refutes our analysis, will have set a precedent and a deadly blow to the US Military and the safety and security of this great nation based solely on their ‘feeling’ that additional study is required,” Faux wrote.

Andrew Gottlieb, the executive director of the Association to Preserve Cape Cod, said in a Tuesday statement that emails reveal both the National Guard’s worry about submitting the machine gun range project to a thorough environmental review but also demonstrate a “complete disregard of the public’s legitimate concerns about the potential environmental impacts of the project.”

The Association to Preserve Cape Cod decided to file the public records requests after Faux threatened to stop supporting Cape Cod businesses if they did not support the machine-gun range.

“We were concerned that similar threats may have been made to our elected officials, those who may have influence over the future of the proposed project,” Gottlieb said in the statement.

The emails were turned over to the Association to Preserve Cape Cod after it filed an appeal to the Massachusetts state secretary’s office when the Guard repeatedly withheld the requested information.

“I can now see why the Guard would not want the public to see these emails,” Gottlieb said in the statement.

In one email to Keating’s office staff, Faux referenced a Cape Cod Times article reporting on Keating’s call to take a closer look at the machine-gun range. He said he understands that Keating must work with every constituent and support his reelection activities, but those who oppose the machine gun range make up less than 0.5% of the Cape’s population, who he claims have provided a “strong campaign of misinformation.”

“We have provided these folks with EVERY possible piece of information they could need to make an informed decision,” Faux wrote in the March 24 email, “which they obviously do not care to make.”

He said in a March 24 email to Keating’s staff that the project would have an overall positive impact to the environment, with copper bullets that would not affect groundwater, mitigation to improve the habitat and eventually sequester carbon, but that “falls on deaf ears in the small fraction of citizens that represent the activists.”

“Honestly, just the phrase ‘further NEPA review or EIS (Environmental Impact Statement) coming from the (congressional) delegation will sink this project and dramatically impact the MA National Guard,” he said in the email.

He added that the National Guard can meet the desires of Keating and the rest of the delegation in regard to “appeasing” those in opposition by providing a deeper dive into the impacts of the project without adding NEPA action.

On April 12, Faux sent another email to Keating’s office about an April 9 letter that Keating, Warren and Markey sent to Lt. Gen. Jon Jensen, director of the Army National Guard, that expressed further concerns about the machine-gun range.

“It’s pretty obvious that you have deliberately deceived me and my colleagues and created a false sense of trust,” he said in the email. “I am still shocked that the delegation would abandon the Guard based on comments from a small group of activists that manipulate facts to perpetuate their own anti-military agendas.”

The Association to Preserve Cape Cod has urged Baker to order the Guard to “shelve” the project, saying the project has not been managed legitimately and with fair consideration of public input.

“The governor has no other choice if he wishes to restore faith in the integrity of the public process under his administration,” Gottlieb said in the statement.