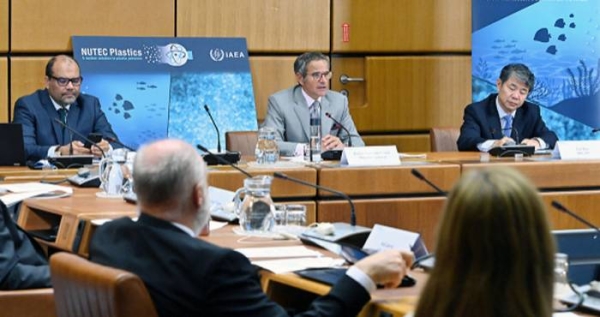 VIENNA — The coastlines of Africa stretch across 30 000 km and are host to heavy industry, sprawling peri-urban settlements, in addition to tourism and shipping activities, all of which contribute to the growing challenge of marine plastic pollution in the region.

While Africa stands out as the continent where most countries have instituted a complete ban on the production and use of plastic bags, consumer waste nevertheless represents a staggering 93 percent of plastic marine debris, according to UNEP, and presents a substantive threat to the region’s fishing industry, which employs more than 12 million people.

This week, ministers from several countries in Africa, as well as representatives of international organizations, convened virtually for the third in a series of regional NUclear TEChnology for Controlling Plastic Pollution (NUTEC Plastics) roundtables, organized by the IAEA to tackle the global challenge of plastic pollution using nuclear techniques.

Two similar roundtables have already been held this year for countries in Asia and the Pacific, and in North, Central and South America and the Caribbean.

“Today every African country that is a member of the IAEA is represented here. This is a confirmation of the awareness of the gravity of this issue and the need to do something about it,” said IAEA Director General Rafael Mariano Grossi, who opened the event.

“In many countries important initiatives and policies have been put in place to start looking at the issue of plastic pollution and providing solutions. The IAEA is bringing to the table the contribution from nuclear sciences, technologies and applications, which is very important.”

The IAEA has a long history of working in Africa at the national and regional levels on environmental projects, helping to assess ocean acidification in the western Indian Ocean and supporting the expansion of environmental monitoring programs across the continent.

These efforts often rely on the use of isotopic techniques to monitor marine pollution. However, this roundtable represents the first time that plastic pollution is the focus of IAEA activities on the continent.

“The production and disposal of plastic, and its discharge into the marine environment, is causing African waterways to be increasingly choked with plastic waste. Marine species — turtles, fish, sea birds and others) — are ingesting waste, causing microplastics and nanoplastics to quickly build up in food chains, portending consequences for both human health and the sustainability of marine ecosystems,” said Shaukat Abdulrazak, director of the Division for Africa at the IAEA’s Technical Cooperation Department, who took part in the roundtable.

“Through close cooperation, open dialogue and the application of new technologies, we can hope to slow and manage the challenge of marine plastic pollution.”

The IAEA has been pioneering NUTEC Plastics to assist countries in integrating nuclear and isotopic techniques alongside conventional techniques, to fight plastic pollution.

Speaking ahead of the event, IAEA Deputy Director General and Head of the Department of Nuclear Sciences and Applications Najat Mokhtar said: “Actions against plastic pollution will only work if the full range of available technological solutions is used. NUTEC Plastics will consolidate the Agency’s work in helping Member States integrate nuclear technologies and techniques in their national and regional efforts to combat plastic pollution.”

The meeting gathered over 400 participants from 46 countries in Africa, including high-level officials from Djibouti, Egypt, Ghana, Kenya, Nigeria and Senegal, and representatives from the United Nations Environmental Program’s (UNEP) Regional Office for Africa and the United Nations Economic Commission for Africa (UNECA).

Participants heard about, and discussed, the available nuclear technologies for recycling plastic waste and for monitoring plastic pollution in the ocean. They exchanged information on existing programs and practices, such as industrial practices, regional initiatives and capacity building activities, and discussed opportunities for strengthening partnerships and synergies to address plastic pollution from its source to the sea.

Peter Thomson, the United Nations secretary-general’s special envoy for the ocean, gave an opening address by video, highlighting the combined challenges posed by ocean acidification, deoxygenation and warming, all of which are exacerbated by the growing plastic pollution.

“The state of the oceans’ health is scientifically measurable as being in decline. One of the greatest tasks of our time is to stop that decline and to restore the good health of the oceans,” he said. “Building upon IAEA’s efforts to address plastic pollution through recycling, NUTEC Plastics brings to bear radiation technology and marine monitoring using isotopic tracing techniques.”

Hua Liu, deputy director general and head of the IAEA’s Department of Technical Cooperation, underscored the need for plastic materials to be produced and used in a far more sustainable way.

“Our discussions have highlighted the urgent need to move away from the way we use plastic today. We must step away from the linear ‘take-make-waste’ model, and move towards a sustainable circular economy for plastics, built on the 4R principles: reduce, reuse, recycle and renew,” he said.

“Through NUTEC Plastics, the IAEA seeks synergies and partnerships with other international efforts,” he added. “It will also provide a solid platform for North-South, South-South, and triangular cooperation on marine plastic pollution and recycling.”

The next NUTEC Plastics roundtable, for the Europe region, will take place on 7 October 2021.

— the writer is member of the IAEA Department of Technical Cooperation

2021-09-12
Previous Post: ‘The harm to children is irreparable’: Ruth Etzel speaks out ahead of EPA whistleblower hearing | US Environmental Protection Agency
Next Post: How universities in the UAE foster entrepreneurship ecosystems