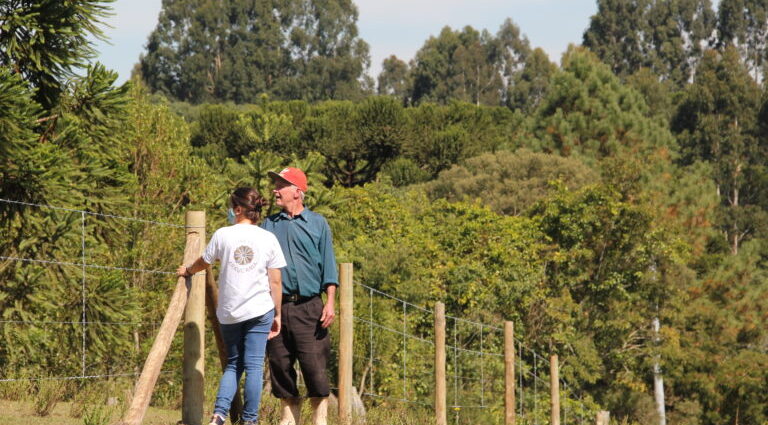 Araucaria trees have been growing since the Jurassic period, surviving across numerous geological eras and events like the split of the Gondwana supercontinent. But today’s Araucarias are not managing to withstand the hands of humans and their chainsaws.

The tree also known as the Brazilian Pine has its habitat in the Mixed Ombrophilous Forest, one of the Atlantic Forest ecosystems that once covered large swaths of southern Brazil. But more than a century of unregulated logging has resulted in the Forest being reduced to small, dispersed fragments.

In the Brazilian state of Paraná, where the trees are the state’s symbol and even lend their name to the capital city Curitiba (which in the Tupi-Guarani language means “pine forest”), only 0.8% of the original forest remains — a mere 60,000 hectares (150,000 acres) of the original 8 million (20 million acres) that once grew here.

But today, many organizations are working against the deforestation status quo that has forced the Araucaria onto the endangered species list.

One of the most inspiring is Araucária Connection, operating since 2018 in southern Paraná by the Society for Wildlife Research and Environmental Education (SPVS), which runs a project based on the conservation model that a well-conserved native forest can drive the local economy, bringing in financial benefits equal to farming.

The project’s initial goal is to restore 335 hectares (827 acres) of Mixed Ombrophilous Forest and plant 250,000 native seedlings by May 2023. The seedlings are distributed to Conservation Units and Permanent Preservation Areas (PPAs) on small farms, which are grounds for most of the forest’s remaining fragments on the Paraná plateau.

“Aside from offering farmers a strategy for restoration through the Degraded Land Improvement Program (PRAD), our proposal aims to reestablish ecosystem services,” says Vitória Yamada, a biologist who coordinates the project. “These are nature’s benefits that are vital for the well-being of humans and economic activities. One example is hydric resources that are established when springs are recuperated within a well-conserved area.

“We know that the project on its own won’t change the scenario that is threatening the Araucaria forests,” she continues. “But it is a step in the process of making farmers, business owners and politicians more sensitive to the issue and gain awareness of how important well-conserved forest is to the economy and to society in general in terms of quality of life.”

Aside from implementing restoration projects, the SPVS also funds conservation initiatives, such as working to protect contiguous natural areas in the coastal mountains in the states of Santa Catarina, Paraná and São Paulo. Both conservation and restoration are vital components for the region’s nature management, says Yamada. The SPVS also offers environmental education activities and information on nature’s intrinsic value.

The strategy behind Araucária Connection’s is to plant seedlings and build fences to keep the seedlings from being trampled by animals in riparian forests and near springs. This creates conditions for the remaining patches of the ecosystem to be reconnected through small ecological corridors inside PPAs.

The long-term goal is that local biodiversity will return, and that genetic flow will increase through the communication of plant and animal populations.

“We offer and implement the restoration plan [to farmers] without charge,” says Yamada. “In exchange, farmers usually increase the preserved area on their property beyond the limit required by law, which varies from 5 to 30 meters along riverbanks, and maintain the fences to protect the trees throughout the years.”

The Araucária project is funded by Japan Tobacco International, which also provides operational support. The company, which buys tobacco grown by its partner farmers in the region, facilitates the connection between the farmers and the project’s biologists, inviting them to join the initiative. Seedlings are provided by the Water and Earth Institute (Paraná State’s environmental agency) together with the Chauá Society, which works with rare and threatened species in the Mixed Ombrophilous Forest.

In the field, farmers are reporting that in just over three years of work, the project has proven efficient: some 240 hectares of land have already been restored. In thanks to the project, Geraldo Moutim, who owns property in the municipality of Rio Azul, recalls the revival of two springs that had been silted because of constant trampling from cattle herds. “The specialists came, replanted the areas around the springs with native plants and then fenced off the area,” he says. “I have already seen an increase in water, and expect the flow within our property to be much stronger in another four years.”

And Clavir João Antochechen, who grows tobacco, corn, soybean and beans on his ranch in the municipality of Paulo Frontin, saw his riparian forest more than double in size after he joined the program and planted the blossoming Ipe tree, walnut, yerba mate, Brazilian cedarwood and Araucaria. “Since the restoration didn’t cost us anything, we decided to increase the native vegetation area around the spring from 7 to 15 meters, which is what the law requires.”

In the future, Araucaria Connection aims to broaden the reach of the project beyond the distinct southeast and south-central areas of Paraná state to reach all of Brazil’s southern plateau.

SPVS cofounder and CEO Clóvis Ricardo Schrappe Borges is critical of Brazil’s current environmental policy but believes that more people will join the program if there is money involved.

“Our society still doesn’t see nature conservation as a partnership. These remaining forests are important to public interest with regard to private landowners because they must comply with the Forestry Code,” explains Schrappe. “Projects like Araucaria Connection are the first steps that will lead to results on a larger scale. We have the opportunity to reverse this trend of degrading nature by transforming protected areas into economic assets that can be created through good conservation.”

According to Schrappe, the financial mechanism can be created through prevented deforestation, where owners of preserved forest receive payment in the form of environmental services in exchange for maintaining standing forest. One such instrument is ICMS Ecológico, which comes into effect when municipalities that maintain well-preserved natural areas receive larger shares of the state ICMS value-added tax revenue.

“Paraná is the state that has cut down the most Atlantic Rainforest in Brazil over the last twenty years,” says Schrappe. “We continue to destroy the few remaining pristine forests. It is an outdated culture in which nature is seen as a roadblock to development. Our challenge is to increase awareness and grow support from society to protect forests — to create a perspective that sees nature as an integral part of business.”

This story was produced in collaboration with Landscape News to raise awareness of topics relevant to the upcoming Global Landscapes Forum’s Amazonia Digital Conference: The Tipping Point (September 21-23, 2021). Join here.