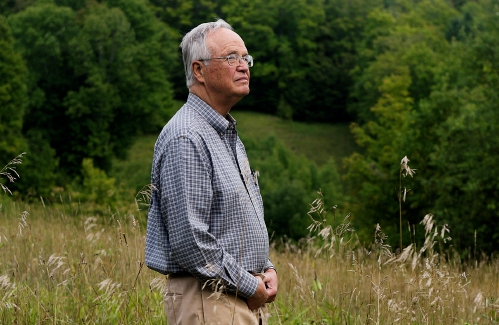 STRAFFORD — A prominent environmental lawyer in the Upper Valley is asserting that both Republican and Democrat administrations gave their “full-throttle” support to fossil fuels for the past half-century despite their access to ample scientific evidence that climate change would affect future generations, ignoring reasonable policies that would limit greenhouse gas emissions.

Gus Speth, 79, has been on the frontlines of environmental advocacy since the 1970s, and he saw, firsthand, much of the story he tells in his latest book, They Knew: The U.S. Federal Government’s Fifty-Year Role in Causing the Climate Crisis, which was published last month by the MIT Press.

“My book is perhaps the saddest story ever told,” Speth said in an interview last week from his Strafford home. “They knew the science. They knew the alternatives. Endless reports on both of those subjects were flowing into each administration. And they sustained and perpetuated and supported the fossil fuel economy.”

They Knew is adapted from Speth’s expert testimony for the plaintiffs of a landmark environmental case, Juliana v. United States, which began in 2015. Our Children’s Trust, a public interest law firm, is representing 21 children and young adults who argue that they are suffering injuries directly related to climate change — ranging from harm to their physical health to displacement from their homes to a looming sense of institutional distrust. They argue that the federal government violated their constitutional due process rights, including a newly articulated right to “a climate system capable of sustaining human life.” The defendants include seven administrations and numerous federal agencies.

The Department of Justice, representing the defendants, contends that the Constitution does not guarantee the right to a stable climate, that the harms the plaintiffs describe are too generalized for a civil case and that the judiciary would be overstepping its constitutional authority if it attempted to redress the injuries that they claim.

In January 2020, a federal appeals court in Oregon dismissed the lawsuit, concluding that the plaintiffs lacked standing. Although the majority found the injury and causation requirements met, it “reluctantly” concluded that the court did not have the authority to redress the harms that the plaintiffs are suffering because of climate change.

The plaintiffs had requested an injunction that would force the federal government to cease permitting, authorizing and subsidizing fossil fuel use and to prepare a plan to bring down emissions. With one judge dissenting, the majority concluded that the plaintiffs should make their case to the “political branches or the electorate at large.”

The plaintiffs have sought to amend their complaint to appeal for “declaratory judgment,” which would establish that their constitutional rights had been violated but stop short of implementing federal energy policy. Alabama led 18 states in an attempt to intervene and stop the case, arguing that the defendants’ “energy-policy goals conflict with those of the States and the Biden Administration has demonstrated a willingness to engage in collusive litigation moves to rid itself of policies the federal government had until recently been defending.” Settlement negotiations continue between the plaintiffs, their attorneys and the Department of Justice as the court deliberates.

The purpose of They Knew extends beyond the lawsuit — Speth said he wrote the book for the thousands of people who have awakened to climate change issues and who “are hungry to know how we got here.”

“I was in the Carter administration, and I really want people to understand how much we knew at that point,” he said. “We knew so much about what needed to be done, and we had a president who wasn’t just sitting up there doing other things — he was engaged in energy in a big way, a very big way.”

Speth served as Jimmy Carter’s chief environmental advisor from 1977 to 1981 after he co-founded the Natural Resources Defense Council.

His book treats Carter’s four years in office in the most detail.

In subsequent years, Speth led major environmental organizations such as the World Resources Institute, served as the administrator of the UN Development Programme, and advised President Bill Clinton — all positions that gave him a direct view into federal policy.

His history also leans on troves of evidence that Our Children’s Trust collected for Juliana. After serving as the dean of the Yale School of Forestry and Environmental Studies, Speth moved to the Upper Valley to join the faculty of the Vermont Law School in 2010.

Although They Knew highlights how Carter’s policies promoted fossil fuels, Speth argues that the Democrat from Georgia understood the imperative of energy efficiency and renewables.

He believes that had Carter been reelected in 1980, he would have initiated a “smooth transition” to “an outstanding US climate performance and global leadership.”

But that was not to be. Instead, Speth details how the intervening 40 years saw the federal government continue to promote the fossil fuel economy with policies including subsidies and leases on federal lands.

A recurrent pattern saw its first iteration after Carter lost reelection: A Republican administration — Ronald Reagan’s — undid the progress of the preceding Democratic administration when he gutted funding for research and development for renewable energy at the Department of Energy and eliminated tax breaks for wind and solar technology, in a partisan dance that perpetuated the fossil fuel economy.

He has observed a “glass ceiling” that no administration was willing to break: No president, of either party, would both recognize the need to get out of the fossil fuel business and commit to doing something about it.

Second, Speth cites “ideologues” categorically opposed to government intervention, like tax-cut advocates such as Grover Norquist who want to get government “down to the size where we can drown it in the bathtub.” As Speth sees it, federal intervention in the economy is an indispensable piece of addressing the climate crisis.

And last, he blames the recalcitrant idea that economic growth is the ultimate metric of national success.

The language of moral responsibility, especially between generations, saturates how he speaks about the history of federal energy policy.

“This national energy policy of the last four decades is, in my view, the greatest dereliction of civic responsibility in the history of the Republic,” he writes.

He describes the “huge devastation” baked into the future even if the country now takes drastic action to curb emissions. His own six grandchildren, who live in New Jersey, Washington, D.C. and South Carolina, are already living with the effects of rising sea levels, increased hurricane risks and heavy rainfall.

“We have (eliminated) huge possibilities of options that would otherwise have been out there for people who now are going to have to deal with this issue, and pay for this issue, and be constrained by this issue,” Speth said. “And that’s a huge diminution of human freedom.”

They Knew offers a litany of setbacks and disappointments. Yet he writes that he and other climate advocates are “forever hopeful.” While Speth said he is not optimistic, he still places hope in the judicial branch’s power to force other branches of government to act, and in the power of sustained “mass civil mobilization.”

“It’s a big mistake for us to assume that we are the problem,” said Speth, who readily acknowledged that the solar collector and electric vehicle in his yard would never begin to compensate for federal inaction on climate change. “We have to recognize that this is a big systemic problem. And it will only be solved with big systemic changes.”

Speth spent three days in a D.C. jail for civil disobedience while protesting the Keystone XL Pipeline, a story he repeated with a note of pride.

They Knew concludes before President Joe Biden took office in January, but Speth also has hope for Biden, who has promised to build a net zero emissions economy-wide by mid-century.

Speth warned that transitioning away from fossil fuels has never been so urgent and that we need to “devote massive amounts of energy and money and effort and regulatory power to do it.”

He also noted that “the more leisurely pace we could have taken is lost in history.”

2021-09-13
Previous Post: To champion sustainability is to make the future possible – Manila Bulletin
Next Post: Path to growth