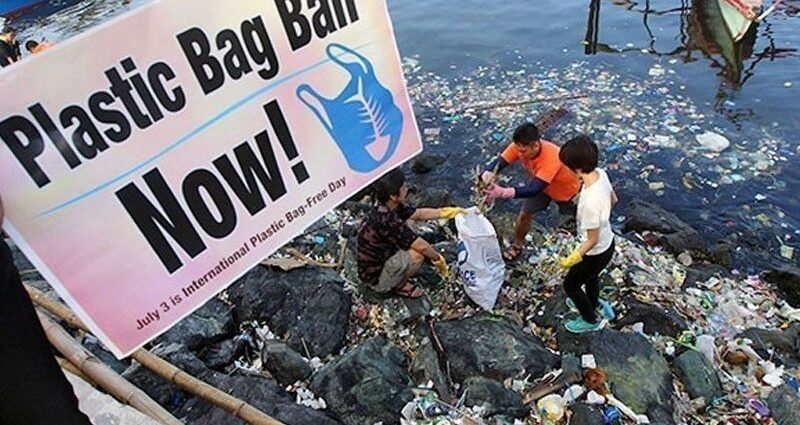 MANILA, Philippines — Environmental group Greenpeace Philippines on Wednesday called on the authorities to regulate plastic production and enact a strong legislation banning the use of single-use plastics as part of the government’s climate action.

In a statement, Greenpeace said the government needs to “mandate plastic reduction and reuse systems in the consumer goods industry to prevent further global heating.”

It urged senators to pass a more stringent and comprehensive bill that will prohibit the production and use of single-use plastic products and packaging, noting that the version passed by the House of Representatives “supports false solution.”

The group issued the call following the release of a Greenpeace report, which found that consumer goods companies such as Nestlé, Coca-Cola and Unilever are driving the expansion of plastic production and contributing to climate change with their greenhouse gas emissions.

Without immediate action, plastic production could triple by 2050, according to industry estimates. This projected growth in plastic production would increase global emissions from the plastic life cycle to an equivalent of 300 coal power plants by 2030.

The report also identified the links between the world’s largest brands and fossil fuel companies.

“These big brands often promote their climate commitments to much fanfare, but in reality, they are actively contributing to the climate crisis and its impacts, such as worsening typhoons, flooding, food insecurity, loss of livelihoods, and loss of life for Filipinos,” Greenpeace zero waste campaigner Marian Ledesma said.

Greenpeace called on companies to move toward systems of reuse and package-free products.

“If they genuinely care about their impact on the environment and people, they would sever their ties with fossil fuels and make urgent commitments to phase out disposable plastic packaging and transition to reusable and packaging-free systems,” Ledesma said.

Follow this page for updates about climate change and information on current environmental issues. Main photo by Efigenio Toledo IV

The UN rights chief warned Monday that environmental threats were worsening conflicts worldwide and would soon constitute the biggest challenge to human rights.

Michelle Bachelet said climate change, pollution and nature loss were already severely impacting rights across the board and said countries were consistently failing to take the necessary action to curb the damage.

“The interlinked crises of pollution, climate change and biodiversity act as threat multipliers, amplifying conflicts, tensions and structural inequalities, and forcing people into increasingly vulnerable situations,” Bachelet told the opening of the 48th session of the UN Human Rights Council in Geneva.

“As these environmental threats intensify, they will constitute the single greatest challenge to human rights of our era.”

The former Chilean president said the threats were already “directly and severely impacting a broad range of rights, including the rights to adequate food, water, education, housing, health, development, and even life itself”.

She said environmental damage usually hurt the poorest people and nations the most, as they often have the least capacity to respond. — AFP

A global network of more than 1,500 climate NGOs called on Britain to postpone the upcoming COP26 climate summit, saying in a statement on Tuesday that a lack of COVID-19 vaccines risked sidelining developing countries.

“Our concern is that those countries most deeply affected by the climate crisis and suffering from the lack of support by rich nations in providing vaccines will be left out,” said Tasneem Essop, CAN’s executive director.

“There has always been an inherent power imbalance within the UN climate talks and this is now compounded by the health crisis.” — AFP

At least 25 people in the New York region have died from flash flooding caused by rainfall brought by the remnants of Hurricane Ida, officials said Thursday.

Twelve people have now lost their lives in New York City, including 11 who were trapped in the basements of their home, the NYPD said.

Ten were known to have died in New Jersey, according to officials there and another three succumbed to heavy flooding near Philadelphia in Pennsylvania. — AFP

At least eight people have died in New York after the city was inundated by flash flooding, police said Thursday, as Storm Ida wreaked havoc on the northeast United States, forcing flight cancellations and state of emergency declarations.

Ida slammed into the southern state of Louisiana over the weekend, bringing severe flooding and tornadoes as it blazed a trail of destruction north.

New York state governor Kathy Hochul declared an emergency as the remnants of the storm caused massive flooding in the country’s financial and cultural capital, leaving the boroughs of Brooklyn and Queens badly hit.

Police did not say how the eight deaths in the city occurred. — AFP

US climate envoy John Kerry is in Japan to drive international action ahead of November’s COP26 summit to combat global warming.

“We discussed our cooperation on efforts to reduce the emissions of major emitter countries, including China,” Foreign Minister Toshimitsu Motegi told a press briefing after meeting Kerry.

“China is the world’s largest emitter of CO2, as it is also the world’s second-largest economy… it is important that we call on them to fulfil the responsibility appropriate to their status,” he said.

Kerry will meet Prime Minister Yoshihide Suga and then travel to China to hold talks with Xie Zhenhua, the country’s special envoy for climate change affairs.

The 26th edition of the UN Climate Change Conference of the Parties, or COP26, begins on November 1 in the Scottish city of Glasgow. — AFP