FL Agriculture Commissioner To Ban Use Of Plastic Foam Products 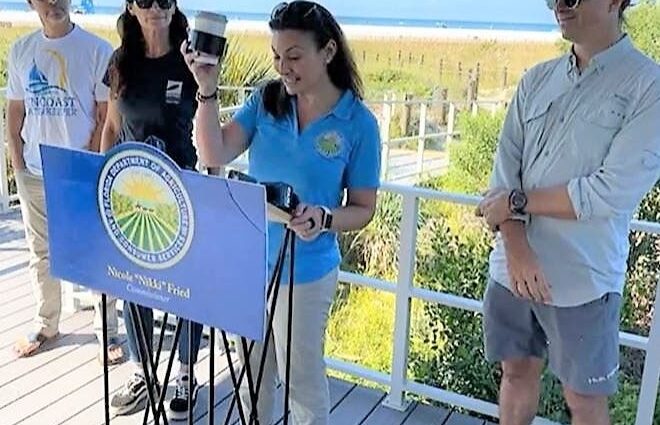 Florida Agriculture Commissioner Nikki Fried said the Florida Department of Agriculture and Consumer Services is drafting an amendment to state statutes that would phase out the use of polystyrene products (plastic foam) in 40,000 Florida grocery stores, markets and convenience stores starting next year.

Fried announced the major consumer and environmental policy initiative at a news conference at which she was joined by Nicole de Venoge, Florida policy manager at the Surfrider Foundation; Hunter Miller, Florida Gulf Coast field representative at Oceana; and Justin Bloom, founder of Suncoast Waterkeeper.

“As Florida’s consumer protection and food safety agency, we have an opportunity to help consumers and companies make a positive change,” Fried said. “That’s why I’m excited to announce that we have started the rule-making process to phase out the use of polystyrene food packaging at the 40,000 grocery stores, markets and convenience stores that we regulate in Florida.”

For 100 years, polystyrene food packaging products have been inexpensive and widely available.

However, studies have shown that polystyrene is linked to serious health conditions including cancer, vision and hearing loss, birth defects, respiratory irritation and damage to the liver, kidneys, and spleen, Fried said.

“Polystyrene may be convenient, but there is a hidden danger to public health from these disposable consumer products, Fried said.

Additionally, because they’re made to be thrown away, all too often these cups, plates and containers find their way into waterways where they pose a hazard to marine life.

Miller said polystyrene is particularly concerning because the material breaks down into microplastics “at an alarmingly fast rate.”

According to the National Oceanic and Atmospheric Administration Marine Debris Program, microplastics, which are less than 5 millimeters long, are the most prevalent type of marine debris found in the ocean. Because they’re so tiny, aquatic life and birds often mistake microplastics for food.

Some plastic pieces are so small that even zooplankton—tiny grain-sized animals that form the base of the ocean food chain—consume them. The zooplankton is then eaten by larger marine life with often-fatal consequences.

While many communities now advocate recycling one-use plastic products, to date only 9 percent of all the plastic waste generated has been recycled, Oceana said.

The ultimate solution, Miller said, is an all-out ban on single-use plastic products.

“The Gulf Coast is facing a lot of challenges, but plastic pollution continues to be a growing threat,” he said. “We know that polystyrene is polluting our beaches, our environment and our oceans, but it’s also known to be toxic to humans. With that knowledge, we’ve seen cities, states and even entire countries phasing out polystyrene. It’s past time that Floridians don’t have to deal with this polystyrene that’s polluting our water and bodies.”

“From polystyrene to straws and other litter regulations, the consumers in Florida are focused on our marine environment,” de Venoge said. “They are demanding a shift in rules, products used, and extended producer responsibilities as part of our resiliency and sustainability plans into our future.”

While polystyrene may keep take-out food warm and drinks cold, de Venoge said there’s a long-term cost for these conveniences.

“The truth is we have an obligation and a responsibility to take on this opportunity, to think long-term by balancing our economic growth with our ecological sustainable products,” she said. “At almost 22 million residents here in the state of Florida, we hope these rules are a step toward a commitment to Florida communities and a future where our most valuable resources are protected for future generations.”

There’s an economic motivation for phasing out Styrofoam and other plastic foam products as well, Fried said. It will increase the demand for affordable alternative products created by Florida businesses using Florida-grown crops and employing Floridians to make them.

“This vision to phase out polystyrene until reaching zero within this decade is a monumental change for consumers, health and the environment, joining a third of U.S. states in taking action on this issue,” Fried said.

“Our economy relies on a healthy environment. Steps like these are bold, creative and much-needed,” said Bloom. “I think there’s a thirst in our community and other communities for actions like this. We’re limited by a Legislature that is arguably captured by polluters and industry, and it won’t allow communities to embrace protective efforts to ban polystyrene. So thank you, Commissioner Fried, for your leadership to find ways to protect our communities.”

Similarly, after a number of Florida communities passed laws prohibiting the single-use straws, the Legislature passed a bill in 2019 prohibiting local governments from enforcing regulations on plastic straws over the next five years.

However, six U.S. states and 13 cities have enacted bans on polystyrene and encouraging the use of alternative packaging made with hemp fibers and sugarcane bagasse, both of which are grown in Florida.

Fried’s proposed draft rule, 5K-4.045 would begin a multi-year phase-out of polystyrene packaging beginning in 2022, with a maximum allowable amount of polystyrene to be sold or distributed decreasing each year.

The draft rule would also require companies to file an annual report on the amount of polystyrene sold or distributed each year.

Fried said the rule-making process will include workshops and public comment periods.

Once it passes, it will fall under the agriculture department’s statutory authority, Chapter 500.90, Florida Statutes.