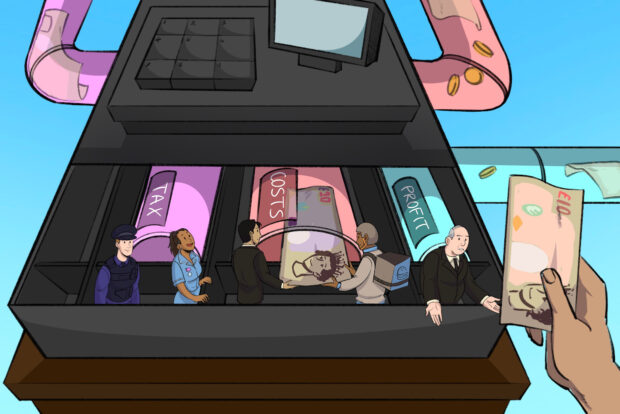 From till to taxman: by introducing common data standards, governments can ease the process of assessing and collecting tax while cutting companies’ administrative costs. Illustration by Katy Smith

By digitally transforming the collection of financial data, governments can streamline and automate the process of assessing and collecting business taxes. But to successfully deliver reforms, the panellists warned at a GGF webinar, civil servants must ensure they’re as attractive to companies as to tax collectors. Adam Green reports

When Sami Koskinen of the Finnish Tax Administration began developing plans for the digital transformation of his country’s revenue collection system, he didn’t start with the reform of government business processes or online services. Instead, he outlined a scheme to standardise all business invoices and receipts in a machine-readable format, enabling every company’s financial data to be shared and compared.

Finland’s three-year scheme, entitled the Real Time Economy, envisages the state as just one of many entities with access to this vast trove of data: under this plan the government gains the ability to automatically calculate corporate tax and payroll liabilities, while companies benefit from real-time insights into their financial health and relative performance. And it’s those advantages for business users, argued Koskinen, that explain why the scheme is likely to succeed.

At a Global Government Forum webinar held in September, every participant agreed on this point: making tax digital will not be first and foremost a government initiative, but a by-product of a wider digital transformation of economic activity. The end point, as Amanda Green – a partner at IBM, which supported the webinar – put it, is “frictionless tax to go alongside frictionless business.” One must proceed in lockstep with the other.

The attractions to governments of effective digital tax collection are clear. For most states, income taxes and social security deductions from payrolls represent the largest single source of revenue. Making the collection process easier and more automated could therefore increase the amount of tax contributed, while cutting the costs of collecting it.

To illustrate the leap in thinking required to achieve this, Andja Komso – a former Slovenian civil servant who now advises governments on tax reform for the International Monetary Fund (IMF) – drew a distinction between digitisation of tax collection and digital transformation.

In digitisation – a preoccupation of many governments over recent decades – existing processes are moved online, but their underlying logic left unchanged. In transformation, she said, the processes themselves are rebuilt from the ground up with simplicity in mind. During this process, Komso explained, new systems are built around the needs of customers – be they individual taxpayers or businesses – so that compliance becomes easier, and data is treated as an asset that should be collected once then recycled and reused.

Given that most data involved in taxation – from receipts to payslips – is generated by businesses, it is clear that their engagement and support is required to support genuine transformation. “It’s not possible to have a digitally-transformed taxation environment without the cooperation of every interested stakeholder,” said Komso.

The backing of business

But given that, as Green from IBM pointed out, “most businesses are not running their day to day environment with a view of tax at the centre of their world,” how do you secure that cooperation?

In the Finnish Real Time Economy system explained by Koskinen, the goal is to build data standardisation and easy sharing into the foundations of every company’s operations – minimising the additional investment or work required to take advantage of faster, simpler tax services.

As part of the government initiative, the company formation process is being rebuilt. Once a company is registered, its digital ID will be embedded as metadata attached to any financial document it subsequently generates. So the government will be able to link together all the data it holds on individual companies, and to easily collate the info required to assess tax liabilities.

Not every state will choose to start from scratch, of course. For those looking for other options, an alternative will be to collaborate with fintech businesses that can capture and aggregate the transaction data required by government.

Green highlighted payment processors such as Square, used by many small businesses to take contactless card payments. Tap into Square’s data, she noted, and you have access to many businesses’ entire non-cash transaction histories – often representing most or all of their trade.

Again, this means governments finding ways to enable businesses to comply with tax regimes, rather than demanding data is submitted to them. And it means the state accepting a role as just one part of a wider technological ecosystem, rather than the chief architect.

“I think that we’re recognising that we need to really encourage ourselves to think beyond what’s already well known to us, to take in new partners,” Green said.

The new role governments take on will need to be vastly different in different states.

The most famous example of effective digital transformation is, of course, Estonia, where 95% of tax returns now take just five minutes to complete. Essentially, a user simply has to confirm the accuracy of data pulled into their return automatically from existing public and private sources, which the state accesses on the user’s behalf.

Such seamless data sharing was made possible largely because the Estonian state was rebuilt from scratch on a digital first basiss in the 1990s, following the collapse of the USSR. It also requires a huge amount of public trust in government systems – not something all states can count on.

It was no coincidence that when the audience were invited to put questions, the first – directed at Koskinen – asked whether the government has faced resistance from people who object to the government collecting so much data. “I would say that the trust in [Finnish] government agencies is exceptionally high, compared to most countries,” he replied, “so I don’t see an issue there.”

This is rare, noted the IMF’s Komso, adding that when her home country of Slovenia moved to digital tax collection there was significant public scepticism. And Hishamudin Mohamed, director of corporate services at Malaysia’s Inland Revenue Board, said that winning public trust is the single largest obstacle his organisation faces as it attempts to shift to a digital tax collection model.

“Our biggest challenge is to make the taxpayer compliant with the system that we have built,” he said. “Although we have moved all of the systems and services online, if you don’t have buy-in from the taxpayer, they will make us frustrated.”

To date, Mohamed and his team have focused on what Komso would term digitisation rather than digital transformation initiatives: automated emails to remind people to fill in tax returns, for example. But in line with other participants, Mohamed’s ultimate goal is a form of transformation, enabling automatic data collection rather than manual submissions.

In fast-growing economies such as Malaysia, the dividends from enabling easier compliance with tax rules are huge. The country has a giant informal economy, which currently sits outside the taxation system. But fast-rising smartphone penetration and a proliferation of digital payment methods mean huge swathes of previously undeclared transaction data could become visible if the state can build effective partnerships. For Malaysia, Mohamed says, the success of digital transformation will ultimately be judged on whether the tax take increases.

Several participants emphasised the opportunity presented by the pandemic to accelerate digital transformation. Finland’s Real Time Economy System is likely to capture a larger share of transactions as economic changes fostered by the pandemic drive more sales online, while Mohamed called the pandemic “a blessing in disguise” for Malaysia’s tax authority, noting that the government has had to suspend physical filing of tax returns.

Green from IBM, however, suggested that a more subtle shift is taking place – creating a unique moment at which individuals, recognising their obligations to society, are showing an increased willingness to pay tax. If governments can meet them halfway and make it easier to do so, both citizens and the state could benefit hugely.

The Global Government Forum webinar ‘Tax collection in the age of digital’ was held on 21 September, with the support of knowledge partner IBM. You can watch the 75-minute webinar via our dedicated event page.