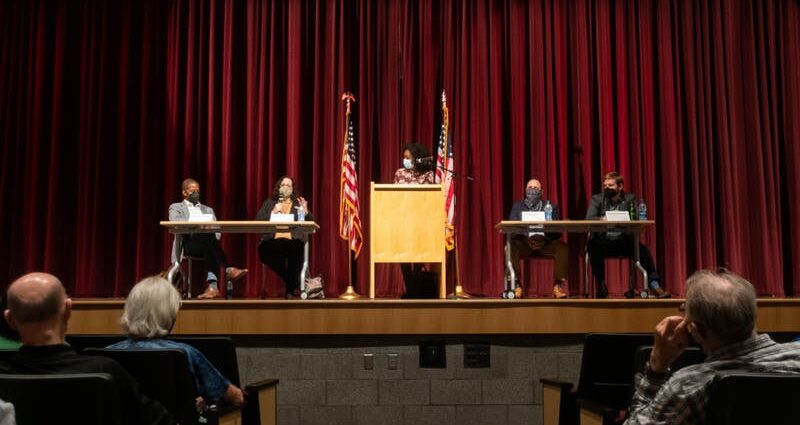 “The goal of this discussion is to help all of us, me included, better understand the state of our natural resources right here in our community, the urgency with which we need to act and what we can do at a micro level to help advance this important cause,” Welch said.

Hammond discussed how Complete Streets programs would take great steps towards reducing carbon emissions and building better infrastructure. Complete Streets are described by the U.S. Department of Transportation as “streets designed and operated to enable safe use and support mobility for all users,” which includes multiple methods of travel such as cars, bicycles, or public transportation.

Rogers said that we need to make the use of landfills more expensive.

“There was a proposal a few years ago to increase the solid waste surcharge … It’s a tax on every time you put material in the landfill,” Rogers said. “The challenge there is, if policymakers want to increase the salary surcharge, they have to increase it to a level that will actually drive behavior change, which would probably require some sort of economic research to determine an appropriate level.”

Phillips said that in a meeting, Detroit-based energy company DTE said that in their about 130 years of business, the two worst years of negative impacts from severe weather were 2017 and 2021. He said that the current weather situation is the most mild it will be for the next three decades — that we are locked into a period of warming of about 30 years because of the latency of greenhouse gases. This latency means that we experience the full affect of our emissions years after they are emitted.

“We need to band together and begin to prepare to adapt our infrastructure, our society and other aspects of our lives for that impact over the next 30 years that is already baked into the system,” Phillips said.

“Certainly, the sun is not shining, the wind is not blowing everywhere all the time, but certainly renewable energy has the ability to produce power somewhere across the United States, at almost all time, all hours of the day,” he said. “If we had better multi-state, multi-regional planning … I certainly think it can help to ease our transition to renewables more quickly.”

Welch named a few goals as her job as sustainability manager, a position that was created last spring.

“​​We have a 19% waste mitigation goal by 2030, efforts to reduce our water use and preserve water,” Welch said. She also said that the city aims to keep sustainability in mind in everything they do.

Questions were also taken from the audience.

In response to a question about President Biden’s $3.5 trillion infrastructure plans, Hammond said that while he doesn’t want to complain about such a huge infrastructure investment, there could always be more.

“There’s already negotiation around the renewable energy pieces of it … There’s already been cuts to the public transit funding portion in favor of roads and road projects,” he said.

At the end of the questions segment of the town hall, Anthony asked the four panelists to respond, in a single phrase, to the question, “How green is Ingham County?“

“We have a lot of work to do yet,” Welch answered.

“Not as green as it needs to be,” Hammond said. “Trending up,” Rogers said.

Phillips initially answered “no comment,” but laughed and said that he agreed with Rogers.

Do you want the news without having to hunt for it?
Sign up for our morning s’newsletter. It’s everything your friends are talking about and then some. And it’s free!

Another attendee asked Welch if there were any tree planting efforts in Lansing. Welch indicated that the question would be best referred to Lansing’s Forestry Department.

Welch said that the city has removed more trees than planted trees, and that this is an issue.

After the town hall, Anthony said that one of the topics that resonated with her the most was the idea of thinking critically about the Biden infrastructure plan.

“Many of us see this as a historic investment, but we want to be really intentional about it,” Anthony said. “Not just filling potholes, but addressing things like broadband access, and connecting that to climate change, connecting that to accessibility and making sure we’re looking at these things through an equity lens.”

Anthony also said that the discussion around environmental justice also stood out to her. She said that low income communities and communities of color are often affected first, and affected more, by environmental issues, and that this would continue to occur if it’s not taken into account when considering these issues.

She also agreed that climate change should not be partisan.