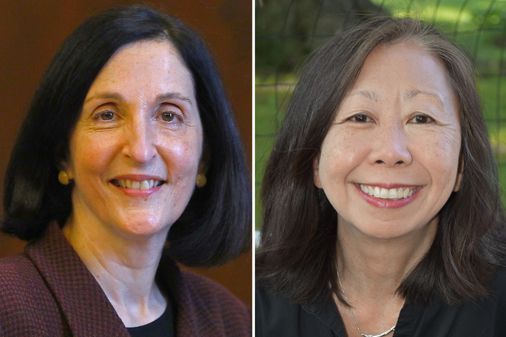 “Even when the news was difficult, I provided frequent information as we grappled with a spreading virus, closing schools, the economic meltdown, and a racial reckoning,” Fuller said. “I did exactly what you elected me to do.”

Sangiolo, an attorney and consumer advocate with the Massachusetts Attorney General’s housing team, said the city must do better in engaging with residents, and address issues like the scale of development, local sources of greenhouse gas emissions, and preserving affordable housing.

“Newton needs accessible, responsive leadership; a bold, transparent leader who will listen to, and respond to community voices in all of our villages,” Sangiolo said, “especially when making decisions that affect our lives and transform our city.”

Fuller and Sangiolo, who served together for years on the City Council, last faced off in the city’s 2017 mayoral election. In September, Fuller placed first in a three-way preliminary election, followed by Sangiolo.

The League of Women Voters Newton hosted the nearly one-hour forum, but the event offered few chances for Fuller and Sangiolo to engage directly with one another.

They briefly sparred over the handling of reopening the city schools in the fall of 2020 — a protracted, difficult process that left many parents, educators, and public officials at odds. The city’s schools have returned to full-time in-person learning this year.

Last year’s school reopening was not done well, and the school community was not involved in those discussions, Sangiolo said. “If I had been mayor during that time [or] if there is another crisis, I will make sure I manage and oversee and plan better,” she said.

Fuller acknowledged that regarding the city’s schools, there were things that could have been done better during the pandemic.

Fuller said she was proud the city provided the resources so Newton Public Schools could bring back students with the highest needs in person in September 2020. Many older students were able to participate in hybrid classes that fall.

Fuller said that the city did a great job on communication, including newsletters. She said the Newton Public Schools “lagged on that. They needed to communicate much more effectively during that process.”

After Fuller spoke, Sangiolo immediately criticized Fuller for not doing enough to take advantage of Newton residents with medical expertise to reopen schools, including Dr. Rochelle Walensky, now the director of the US Centers for Disease Control and Prevention.

“I would listen to the community, and make sure that they are included in decisions and planning to reopen our schools,” Sangiolo said.

Fuller replied that she and the city’s director of health and human services were in contact with health experts. Fuller said she reached out to experts like Walenksy and “listened carefully.”

“They helped us make our decisions all along,” Fuller said.

Sangiolo said she would seek a measure to curb greenhouse gas emissions in Newton’s commercial buildings similar to one recently approved in Boston.

For homeowners, the city should offer residents incentives and subsidies to encourage them to stop using fossil fuels and convert to alternative energy, Sangiolo said.

Fuller said climate change is an existential crisis, and that during the pandemic, the city hired an energy coach to work with residents and businesses to educate them on alternative energy.

A city home rule petition to limit some greenhouse gases in Newton is moving forward, she said. The city has implemented energy requirements for larger developments, she said. A measure similar to Boston’s greenhouse gas rules “may be in our future,” Fuller said.

Sangiolo said the city must do more to address affordable housing, including limiting the number of teardowns of existing homes that are replaced with larger, pricier houses.

She said she wants the city’s ongoing discussions about zoning reform to focus on those knockdowns and increasing vitality in village centers. The city should encourage more accessory apartments in Newton, she said.

Fuller said the city’s zoning should be updated so future development meets what Newton wants and needs. The city needs a wide range of housing at different price points, she said. The zoning should also limit the replacement of existing homes with larger ones, she said.

Fuller said the city is working on new affordable units, including at the former West Newton Armory property.

Neither Sangiolo or Fuller said they favored eliminating single-family zoning in Newton.

Both were asked by moderator Amelia Koch if they would commit $5 million from the city’s American Rescue Plan Act allocation to buy buildings or land for affordable housing use for very low income families.

Fuller said she has set aside millions for affordable housing: “We need more low, low, low income housing,” she said. The city is also considering a change to the city’s inclusionary zoning, she said.

Both candidates said they prioritize building racial diversity and inclusion in Newton and cited their own experiences during their lives.

Sangiolo, an Asian-American woman who grew up in a predominantly white community in New Jersey, talked about the bullying she received, which made it difficult to get through school.

“I have, since then, been advocating and working on social justice issues,” Sangiolo said, including with the Asian-American and immigrant communities. “I’ve always been committed to helping folks just be proud of who they are and share their stories.”

Fuller, who grew up in a Jewish family living in Detroit, said being Jewish meant “you were an underrepresented person in the community.” Fuller said being a woman leader also sets her apart.

Fuller pointed to efforts in Newton to promote diversity, such as a director for community engagement and inclusion in the mayor’s office, city worker training on diversity, and partnerships with local groups.

“Systemic racism and unconscious bias still surround us, so I have been committed as mayor… to institutionalize equity and social justice, reinforce inclusion, affirm diverse identities and experiences, support victims of hate and bias, foster respect, and celebrate difference,” Fuller said. “And you can see this as I am mayor.”

Each said they were not surprised that COVID-19 had a disparate impact on people of color in Newton — a trend echoed across the region. Services need to go beyond public health, and address other issues like food insecurity, housing and job loss, both said.

Sangiolo, who said her mother died from COVID-19 in an assisted living facility, said she is “painfully aware” of the disparities of the pandemic. Many of the clients she serves at the attorney general’s office are low-income or struggling in other ways.

In Newton, food insecurity has been particularly acute, according to Sangiolo.

“If nothing, [food insecurity] is the most important issue that has come to light because of COVID here in the city,” Sangiolo said.

Fuller said the disparity was revealed in health outcomes, as well as in education, finances, and quality of life. The city is also conducting a needs assessment of its lowest-resourced residents, some of whom can overlap its population of residents of color.

“Being a person of color in Newton is hard,” Fuller said, and the city is reaching out to all members of the community.

John Hilliard can be reached at john.hilliard@globe.com.