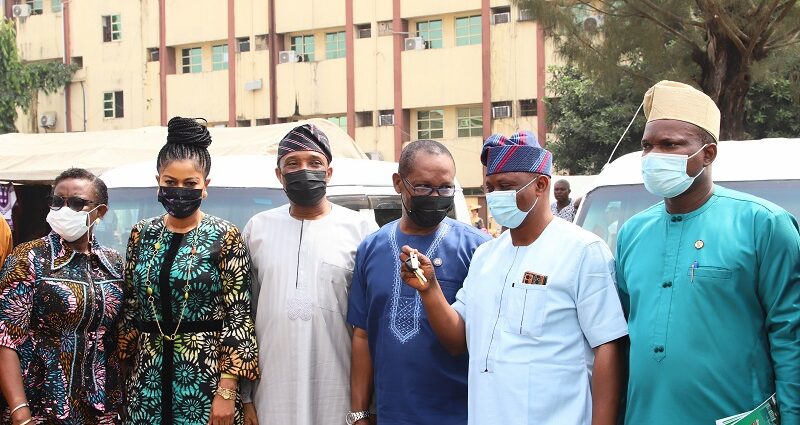 The Lagos State Government on Friday has called for full participation of citizens in its efforts to achieve a cleaner environment.

The state government made the call as the 2021 Sanitation Competition for the cleanest local Council area came to a climax with award of prices.

The First Lady of Lagos State, Dr Ibijoke Sanwo-Olu speaking at the State Auditorium, Alausa venue, during the presentation of prizes such as minivans to the cleanest Local Council in the metropolitan, urban and suburban categories, said the task cannot be left to only the government.

Represented by Mrs Oyindamola Ogunsanwo, she reiterated that the failure of service delivery to people and communities, and lack of sustainable outcomes as direct results of the non-participation of the people.

She recalled that since the inception of the present administration, the State had resolved to rescue the environment from all forms of abuse and declared zero tolerance on environmental nuisances.

She stated that the event was put together to encourage community participation and foster a good relationship between the two tiers of government – State and Local Government in terms of Environmental Sanitation and Community Cleanliness.

She added that the unsanitary conditions of some communities within the State are of great concern and require a great sanitary awakening.

Sanwo-Olu said the essence of the exercise is to assess the state of environmental sanitation across the communities with respect to waste management, streets cleaning, tertiary drainage maintenance, and community beautification.

“When sanitation conditions are poor, diseases and other health-related problems will be prevalent; It has been established by experts that the state of health of a particular location can be linked with the state of the environment of the said location. They are intertwined,” she said.

She added that following the cancellation of the monthly environmental sanitation in 2016, there has been no opportunity to tour all Local Governments and Local Council Development Areas in the State aside the market sanitation initiative of the Office of the Lagos State First lady being coordinated by the Committee of Wives of Lagos State Officials (COWLSO) and other important MDAs.

“To close this gap, we have deemed it fit to organize an annual sanitation competition amongst all LGAs/LCDAs to assess the sanitation status of the entire State and reward the LGAs/LCDAs that are outstanding in areas of environmental management,” she said.

Earlier in his remarks, the Commissioner for the Environment and Water Resources, Mr. Tunji Bello stated that in a rapidly urbanizing society like Lagos, sustainable solid waste management practices remains a key challenge adding that poor waste management causes air pollution, water pollution, as well as marine litters and all these contribute to climate change.

Bello said the interventions carried out by the State since 2003 in terms of waste management are targeted towards building required capacities and making it business-friendly for all investments.

He said that it is sad that Local Government authorities have abdicated their constitutional responsibilities on solid waste management which is one of their basic functions.

He emphasized that it was based on the aforementioned that the Ministry with approval of Mr Governor resuscitated the annual environmental sanitation competition among LGA and LCDAs to raise peoples’ consciousness on the need to prioritize sanitation and be a vehicle of change for the larger society,

Bello said the criteria employed in the course of the assessments include Solid waste management practice across the communities, roads/street cleanliness, open defecation and urination, markets’ sanitation status, sanitation status of Motor parks and garages, Primary Health Centres, Local Government Secretariats and general aesthetics of the LGAs/LCDAs as a whole.

“While several strategies may be available for managing these challenges, monitoring and interventions at the level of the LGs/LCDAs would go a long way to achieve a cleaner and healthier environment. It would not only contribute to improved sanitation for communities but also improved socio-economic development” he stressed.

He stated that the LGAs/LCDAs Award were categorized into Metropolitan, Urban and Sub-Urban, for ease of assessment while awards were given to the cleanest Market, Motor Park, Primary Health Centre and MDAs in the old and new Secretariats of the State.

The Permanent Secretary Office of Environmental Services, Mrs. Belinda Odeneye who also spoke said the year 2021 Sanitation Competition Awards Ceremony is a testimony that must be a continuous event for generations to come.

She said it has been the motivating pillar of environmental sanitation cleanliness in our local Government Areas/Local Council Development Areas.

In a goodwill message, the Chairman of Igbogbo Baiyeku LCDA, Hon Sesan Daini, appreciated the gesture behind the awards, saying it would witness a more robust participation next year.

Also speaking, the Managing director of LAWMA Ibrahim Odumboni said his agency was involved in the grading process of the competition and he can testify that the result is very fair.

The three Councils won a plaque and a branded Suzuki minibus each.