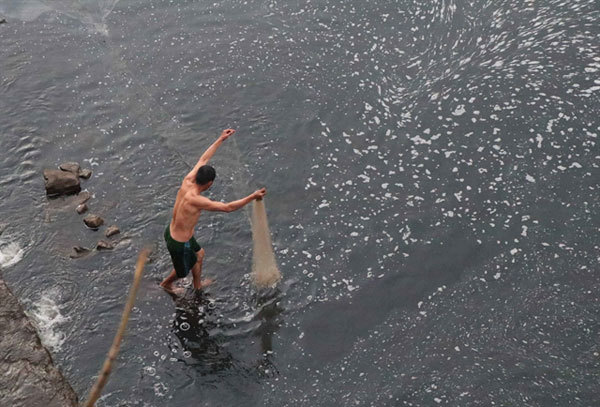 The environment is suffering great pressure from socio-economic activities with an increase in environmental pollution both in quantity and scale, calling for more effective solutions to handle the issue.

The appearance of extreme weather, pollution hotspots at river basins and air pollution are among the main sources of pollution that have worsened in recent years.

According to experts, extreme weather phenomena used to occur in specific seasons but they have recently occurred all year around, even in months that they had rarely appeared previously, such as severe cold spells in northern mountainous areas, drought and rains in the central region and drought and saltwater intrusion in the south.

The Ministry of Natural Resources and Environment also reported increasing pollution at many major canals, particularly at the Bac Hung Hai irrigation system, which includes a main dredged canal of more than 232km, branch canals of about 2,000km, as well as dams, dykes and pumping stations – spanning the three northern provinces of Hai Duong, Hung Yen, Bac Ninh and part of Hanoi.

Due to rapid industrialisation and urbanisation in the area in the last few decades, untreated wastewater from industrial zones, craft villages and residential areas have seriously polluted the irrigation system.

The total amount of wastewater discharged into the Bac Hung Hai system reached over 453,000 cubic metres per day, according to Deputy Head of the Vietnam Environment Administration Hoang Van Thuc.

Air pollution continues to be one of the hot issues of great public concern, particularly in large cities, urban areas and industrial zones, especially PM10 and PM2.5 pollution.

According to the Vietnam Environment Administration, the PM10 and PM2.5 concentration measured by all automatic observation stations in Hanoi during 2018-20 was 1.1-2.2 times higher than the national mandated threshold.

In 2020, Vietnam registered 10 out of 63 provinces and cities with higher PM2.5 concentration levels than the national mandate.

Vietnam is ranked 115th in air quality for household solid fuel use and PM2.5 average exposure, according to in the biennial Environmental Performance Index compiled by scientists at US universities Yale and Columbia.

According to the World Health Organization, air pollution is one of the greatest environmental risks to health. By reducing air pollution levels, countries can reduce the burden of disease such as stroke, heart disease, lung cancer, and both chronic and acute respiratory diseases, including asthma.

The organisation estimated that in Vietnam around 60,000 deaths each year were air pollution-related.

As the COVID-19 pandemic is expected to continue developing complicatedly, negatively affecting all aspects of life, Vietnam is forecast to continue facing environmental challenges, and the Ministry of Natural Resources and Environment has identified key tasks to improve environmental protection.

Environmental protection needs to focus on building and developing the circular economy; innovating environmental management methods in digital transformation; strengthening household solid waste management to fully tap the value of resources; and enhancing conservation of nature and biodiversity, according to the ministry.

The ministry is implementing the national environmental protection strategy until 2030, with the key tasks of promoting the circular economy, green growth, sustainable production and consumption; handling key environmental issues; improving environment quality, conservation of nature and biodiversity; and enhancing the capacity to cope with climate change and reduce greenhouse gas emissions.

The country has been implementing a national plan on climate change adaptation for 2021-30; speeding up scientific research and application of technology as well as boosting international cooperation in coping with climate change; and improving forecast capacity to prevent natural disasters and mitigate their impact.

The revised Law on Environmental Protection, which will take effect from January 2022, is expected to create a breakthrough in protecting the environment with many comprehensive policies.

The implementation of these policies will help improve the efficiency of environmental protection, he said.

Vietnam is about to enter the motorization period when the market will boom and the air will become polluted. Policies on restricting the use of old-technology vehicles and encouraging green, clean vehicles are needed.

Though the average PM2.5 concentration improved slightly in 2020, all provinces and cities in Vietnam still had much higher levels than the WHO’s recommendation, according to data revealed at a workshop held virtually on Tuesday.