Road salt is bad for the environment: What are some alternatives? 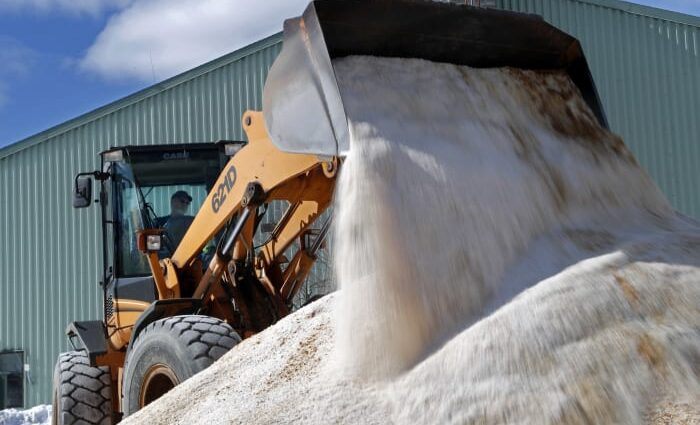 Winter has arrived in Michigan, and with it, loads and loads of road salt. It’s terrible for the environment. What can we do about it? 🧂

I love salt as much as the next guy. My blood pressure is not a fan. But the sodium levels of our roads in the winter are skyrocketing, and it’s raising Mother Nature’s blood pressure, too.

The minute we get our first snow or ice event in Michigan, the salt trucks are dispatched to the freeways and side streets (depending on where you live) to spray salt across the road, in every direction.

And salt is one of Michigan’s most abundant natural resources. The salt deposits below Detroit and much of Michigan formed around 400 million years ago (ah, seems like just yesterday), and the salt mines were discovered under the Detroit area in 1895.

The Detroit Salt Mine, originally the Detroit Salt and Manufacturing Company, opened in 1906. It’s changed hands and technology a few times over the years. Many remember open tours of the mines. The tours are no longer a thing, but the salt mining operation is alive and well.

The point is, switching away from salt is not going to be an easy thing. But there are viable alternatives being tested, some successfully, in other areas, and it could really help our environment and wildlife.

Why road salt is bad

Road salt can contaminate drinking water, kill or endanger wildlife, increase soil erosion, and damage private and public property, according to the EPA. More below from the agency:

The most common substance used for deicing roads and highways is Sodium Chloride (NaCl) or table salt known as rock salt when spread on the road because of its much larger granules.

Rock salt is very effective at melting snow and ice and is considered to be pretty cheap. But rock salt’s low cost does not include the potential damage to property, infrastructure, or the environment. Though seemingly harmless to us, rock salt can have corrosive effects in large quantities that affects cars, trucks, bridges, and roads resulting in approximately $5 billion dollars in annual repairs in the U.S. alone.

In addition, road salt can also infiltrate nearby surface and ground waters and can contaminate drinking water reservoirs and wells. High sodium levels in drinking water affect people with high blood pressure, and high chloride levels in surface waters are toxic to some fish, bugs, and amphibians.

Some alternatives to road salt

The biggest issues for finding alternatives to road salt are cost and volume. You need A LOT of a substance to cover freeways and roads in any given state, and a major increase in price to acquire said substance is not easy to clear.

Magnesium chloride (MgCl)is considered to be safer than NaCl but requires twice the amount to cover the same area, making it more expensive. Calcium chloride (CaCl) is safer for the environment but is three times more expensive than NaCL and so is typically reserved for use in vulnerable areas. But some other ideas are emerging:

A new engineering technique being tested in the Northeast has some promise. Porous or permeable pavement allows standing water to seep through, removing water from roads that would normally go through freeze-thaw periods, preventing ice formation on the roads. (This process is also what causes potholes, maybe you’ve seen them!)

It’s an alternative to traditional pavement, which includes materials like pervious asphalt, pervious concrete, interlocking pavers, and plastic grid pavers. It allows rain and snowmelt to seep through the surface down to underlying layers of soil and gravel. It can also function as a filter, helping to prevent pollutants from entering water sources.

And most importantly, for the topic at hand, it can help reduce the need to road salt. A recent study showed that the annual median snow/ice cover on porous pavement was three times lower than that of regular pavement, and that the low amounts of ice/snow accumulating on porous pavement led to a 77% reduction in annual salt used for maintenance. (More studies and info here)

A road made up of engineered solar panels may sound weird, but it could be the way of the future, and it’s far beyond the road salt issue.

Solar road technology has the potential of converting every single road into a source of renewable energy. In addition to the added energy source, this technology could also eliminate the need for road salt by melting ice or snow through heating water in pipes embedded in the road.

This technology would be a game-changer for electric vehicles, something Michigan is already getting ready to test with electrified roadways.

There are some obvious obstacles here, like the tilt of the panels, shading, dirt and debris issues and the thickness of the glass to withstand traffic. Results have been mixed in case studies around the world.

Brine or juice the road

Forget your Thanksgiving turkey, brine the road instead. Rhode Island has been applying a brine solution to roads, basically salt-water, before winter events since 2012. Known as anti-icing, the brining prevents the formation of frost on pavement, and its implementation has been increasing across New England.

Some are testing using things like beet juice, pickle juice, and molasses with the salt, which help to lower the freezing point of water, slowing down ice formation. The solution gets sticky, which then prevents excess salt from splashing off the road and into the water system.

Though, this may not be great for insects and other animals because dumping a bunch of beet juice into a lake could really mess with the ecosystem. (It can also attract animals to the roadway, like moose!)

Some municipalities have switched to a salt-sand mix. Sand obviously does nothing to melt ice, but it can help increase traction on roads in icy conditions.

But as the EPA notes, after the snow or ice melts, the remaining sand mixture gets washed away, filling catch basins or adjacent waterbodies with sediment, which then requires additional manpower and money to maintain and keep the basins clear.

One very viable option is to just target salt usage. We have the technology! New Hampshire’s road salt initiative includes upgrading equipment so that salt is spread using only “closed loop systems” which allow operators to accurately release and monitor the exact amount of salt applied, lowering speed limits during snow/ice events, and having mandatory use of snow tires during winter.

There is no single answer to this question. It’ll likely be a combo of solutions. But it’s clear that we can’t keep using road salt forever, and the longer we wait to take action, the more damage we’ll do to our environment.

And if you’re looking for eco-friendly salt to use at your house, for sidewalks and porches, here’s a good list.

Related read: When does salt work, and when does it not?