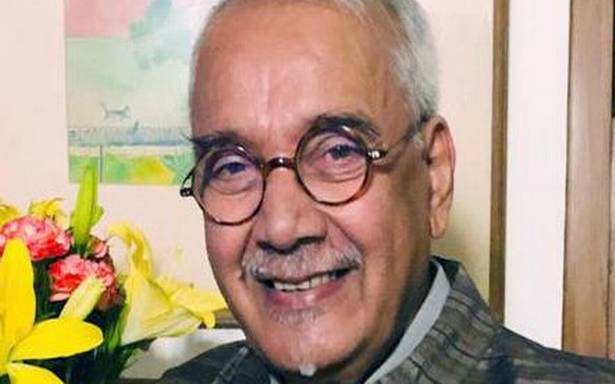 A cursory glance at the project as projected in the Environmental Impact Assessment report demonstrates how calamitous the project would be to Kerala’s vulnerability, says former Chairman of the Delhi Urban Art Commission K.T. Ravindran.

“Kerala’s SilverLine semi high-speed rail project will do more harm to the environment than the declared benefits to the State,” says K.T. Ravindran, urban designer and former Chairman of the Delhi Urban Art Commission, in an email interview to The Hindu amidst the growing controversy over the Left Front government’s decision to go ahead with the multi-crore project.

Does Kerala with its high density of population and limited availability of land require a multi-crore project like the SilverLine semi high-speed rail corridor?

I am aware that political swords have already been crossed on this issue. As an admirer of the Pinarayi Vijayan-led government, I do not wish to enter that debate. Yet in my view the SilverLine project will do more harm to the environment than the declared benefits to the State. Higher speed is equal to higher cost. The faster the speed, more capital intensive a project, less accessible the project is for ordinary people of Kerala. Problem is, do we need more speed or do we need better job opportunities and amenities for the people? Certainly not more speed !

It is a prerogative of an elected government to decide what is the priority for development. But at what social, environmental and monetary cost? From my standpoint, the environmental cost of the project is prohibitively high. In these days of climate crisis when Kerala is far more vulnerable than other States, building climate resilience should be our primary goal. The SilverLine project flies in the face of climate crisis. A cursory glance at the project as projected in the Environmental Impact Assessment (EIA) report demonstrates how calamitous the project would be to Kerala’s vulnerability. Any linear system of movement, particularly land-based, which is least flexible to accommodate variations in land profile or even curves and deviations remains the most interventionist on land. We already have a rail and road-based movement system that runs north-south against surface water flows in Kerala, one more rail line will spell disaster.

What will be the environmental impact of the project that cuts through paddy lands and runs on embankments and cuttings?

Kerala’s landform has two side slopes. From the east to west the land slopes steeply from the Western Ghats to the Arabian sea, north to south from the laterite lands of Malabar to Thiruvananthapuram. The watery landscape of backwaters is the lowest where we saw the worst floodwaters during the last few floods. Besides this, the threat of sea level rise and storm surges from the Arabian sea are now even more severe threats. Kerala in other words is under assault from both sides, from the sea and the mountains by aggressive water flows. The project stays clear of the entire floodable plains of south Kerala and moves up north towards Malabar, to run parallel to the present railway line.

While in its north-south journey the SilverLine avoids the floodable lands, the EIA is silent on the new floodable lands that will result from the 292 km of embankments necessary for the rail gradient. These embankments will have variable impacts on the land and water flows and may completely alter the land west of it as well as land east of it. The EIA report, to its credit, has recognised and made detailed recommendations to mitigate the problems that may occur on the existing floodable land on the west of the line, while is completely silent on the impact the inevitable embankment will have on the eastern side of the line!

Consider the fact that the embankments would run through paddy fields, bird sanctuaries, innumerable wetlands and wooded areas, rivers and river basins, all together about 101 km of land cutting and 11 km underground tunnel and so on. Let us not forget that most of the new alignment would severe the midlands from the coastlands of Kerala. It is in these midlands that the rich bio-resources of our Ayurveda tradition lie. Multiple streams run through the valleys of the undulating land in this region to create a unique biodiversity of medicinal plants, finally contributing to the river networks that traverse the State.

Consider also the unpredictable alterations to local conditions that will ensue. Add to that the severe mud and debris wash down that happens from east to west. How will these accumulations of mud and debris affect the lands adjoining the embankments on the eastern side? What impact would it have on Kerala’s fragile food security and shrinking paddy fields? How many people’s livelihood, homesteads and daily movements would be impacted? What happens to nesting and breeding grounds of animals, birds and insects? Very consequential questions that cannot be ignored. The rehabilitation of thousands of families is part of the plan. Where is the land for that rehabilitation? How many new roads, bridges and other infrastructure are required to meet these requirements? Station locations also raise many issues. In most cases, they do not coincide with the existing railway stations. All along Malabar they run parallel to the existing line even though separate, are close to the present stations, but requires some commuting by passengers.

The last mile connectivity from new stations to the settlements, highways, bus terminals, airports etc. would also create the need for a number of new roads, flyovers, parking lots etc. that would become the burden of local municipalities, apart from the added pollution load and social cost for the local people. New real estate demands would arise from the cost recovery plan as well as from opportunity cost consequent to the new station locations. How will these new areas be serviced by physical and social infrastructure? How would one ensure that the opportunities are open to local people? At this stage very little is known to the public about all these. If they are embedded in the ‘copyright-protected’ Detailed Project Report, would the benefits remain open only to those privileged with access to that information?

Too many issues of public consequence, too much of environmental cost, too much social cost while the financial trajectories are in closed conduits.

Kerala’s people are attached to their ‘locality’. Daily commuting is on the average only around 200 km. Thousands of people travel up to two hours plus for livelihood and other needs. Kerala’s tourism is largely dependent on micro histories and the deep connect that people have with their environment. What would be the impact of compacting time and place in Kerala’s locality, culture? Does size, scale matter?

How should Kerala address the increasing need for improved transportation efficiency while focusing on environmental protection?

Overall, the environmental cost, social cost and monetary cost need reconsideration. An effective method could be in decentralised, regionally balanced plan for Kerala that relies on new technologies, which minimises the environmental cost. This could be a planned, slow and sustainable model that gradually grows qualitatively, more equitably and with least disruptions to Kerala’s increasingly vulnerable settlements. Such a plan would also address climate crisis issues softly in localised mode.

Kerala is socially and politically one of the best States to put in place such a plan. With a progressive elected government having massive ground swell in their favour and an army of loyal volunteers, effective localisation is easily possible. Slow, inward growing, autonomous and locally-controlled circular economies would not require any project of the SilverLine scale. On the contrary, it merely needs modernisation of State-level assets like the railways, road and water networks to grow commensurately in quality. Future technology in transportation would revolutionise the automobile-based movement making much of our road expansion redundant while improved railway networks with local connect could also grow in progressive technology upgradation.

The challenges thrown up by the climate crisis would anyway demand a total revisit of our patterns of habitation and transport. SilverLine for which the citizens would pay back for the next 35 years or so (till handing over the SilverLine to the Railways) would only add to the burden of the State. Obviously, the best alternative for the State is to modernise the existing Railway networks and stations. The Indian Railways, anyway, plans to increase the speed of few trains to 160 km per hour. If this is possible in the existing railway line in Kerala, we would have a transport system whose environmental cost is already paid.

As the State’s lifeline, an upgraded railway would certainly see us through the impending uncertainties of the climate crisis. Increasing the burden of the people by additional indebtedness will adversely affect the entire developmental process for reconstructing our flood-ravaged State. The patterns of development based on fossil fuel driven transportation systems will be soon a thing of the past which would, if carefully planned, become the impetus for the next economic leap.