The resin pricing trend in the third quarter appears to be shaping up differently among the five-large volume commodity resins. Continued high demand and tight supply will keep prices for both PE and PP firm, at the least. In contrast, PS prices are finally heading downward as the key drivers—feedstock costs—appear to be easing up, while PVC and PET resin prices also appear to have peaked for now.

These are the views of purchasing consultants from Resin Technology, Inc. (RTi), Fort Worth, Texas, senior editors from PetroChemWire (PCW), and CEO Michael Greenberg of the Plastics Exchange.

A couple of key challenges are at play, according to these observers. One is the issue of getting resin imports that typically help in constrained supply situations. Prior to COVID 19, a finely-tuned ocean logistics system was in place, and the industry is now struggling to return to some semblance of that. For example, resin containers have been an issue—not because there is a shortage of containers, but because they have not been moving to their destinations at predictable rates. Production disruptions due to weather are another obstacle, amid what is expected to be a very active hurricane season. While resin suppliers are working to build up their inventories after major disruptions over the last year, and also is in anticipation of this season’s hurricane disruptions, industry observers say there is not much wiggle room, especially in the case of polyolefins. Thus, they advise processors to build an added buffer of resin.

Polyethylene prices moved up 5¢/lb in June, and suppliers were seeking another 5¢/lb increase in July, which was expected to take effect, based on continued high demand and tight supply due to unplanned disruptions earlier in the year. This was the view early last month of Mike Burns, RTi’s v.p. of PE markets, PCW senior editor David Barry, and The Plastic Exchange’s Greenberg. If the July increase goes through, the total rise in PE prices since the start of the year would be 41¢/lb for HDPE and 43¢/lb for LL/LDPE resins.

Pointing out that allocations and sales control remained in place for most resins during June, RTi’s Burns noted that suppliers were building inventories but projected solid pricing through the third quarter, adding that another major unplanned disruption would likely be disastrous to market balance. “We will see prices drop when the 40% overcapacity—which typically would go to exports—returns.” He also ventured that demand would slow toward year’s end and projected that suppliers’ May/June inventory buildup may turn out to have been the start of a 90-day recovery. (RTi’s supply model estimates that 90 days of undisrupted production is needed to balance PE supply and demand.) 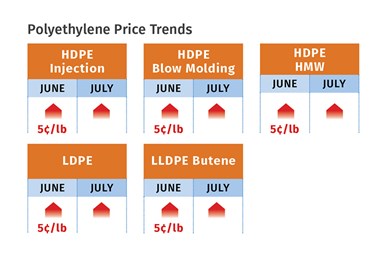 PCW’s Barry ventured that August prices could be flat. “It will become harder for suppliers to charge domestic customers much more than export prices—currently a gap of as much as 20¢ to 30¢/lb. Also, once logistics of getting containers moving and freight issues are resolved, we are likely to see more imported PE finished goods coming in.”

All sources characterized spot PE prices as generally firm, with demand exceeding supply, particularly for PE injection grades. Greenberg reported that prices of such grades had moved up 2¢ to 3¢/lb; HDPE blow molding resin was still scarce, with imports filling in part of the gap; HMW film moved up another 2¢/lb as supply tightened; while LDPE and LLDPE for film both held steady. “Although overall PE production continued to improve and upstream inventories have been replenishing, producers are still not back to normal supply positions, which was confirmed by the continued lack of spot material. At least one producer claimed to be sold out through August,” he said.

Polypropylene prices moved up a total of 12¢/lb in June—4¢ in step with propylene monomer and 8¢ for suppliers’ non-monomer-related increases. Moreover, suppliers came out with additional “margin” increases of 3-5¢/lb for July, in addition to any change in monomer prices, according to Scott Newell, RTi’s v.p. of PP markets, as well as Barry and Greenberg.

Detecting potential for another double-digit price increase in July and August, Newell noted, “Suppliers still have pricing power as things are still snug, demand is strong, and while volumes of PP imports are up, there are lots of logistical challenges to getting them into place.” PCW’s Barry noted that PP imports continued to arrive in above-average volumes, putting some buyers in a more comfortable inventory position for July. Still, he reported that import volumes continued to be restricted by a shortage of empty containers in Asia. “There were reports that the container issue was beginning to ease, but freight costs were still very high,” he noted. 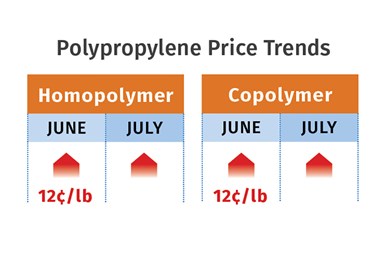 Newell foresaw continued supply and pricing issues for PP in the rest of the year. He also noted the challenge of a general labor shortage, because of which some processors reported lowering production rates to 75% to 80% of capacity, with increased backlogs. Greenberg reported that spot PP trading was a bit slower. “Domestic prime was still absent from the spot market, but imported prime was available on both the East and West coasts. Overall PP prices continued to consolidate: On the top side, spot prime levels eased back a cent, while the lower end of the pricing spectrum climbed at least a nickel.” Barry reported a gradual improvement in spot availability of homopolymer and random copolymer, but continued tightness in impact copolymer due to a series of supply disruptions.

Polystyrene prices dropped 8¢/lb in June, the first price drop since May 2020, according to Barry and Robin Chesshier, RTi’s v.p. of PE, PS, and nylon 6 markets. Price increases implemented since May 2020 have totaled 57¢/lb, and were driven by higher prices of benzene, ethylene and styrene monomer. June saw a reversal, with benzene dropping by $1/gal, ethylene by 9¢/lb and styrene by 10¢/lb. 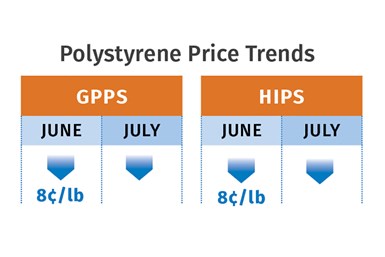 Barry reported that feedstock trends were pointing toward further PS price erosion in July, and that many spot buyers remained on the sidelines, opting to keep inventories as low as possible. He said the implied styrene cost based on a 30/70 ratio of ethylene/benzene had dropped to 38.4¢/lb, down 4.4¢ going into July. Chesshier noted that suppliers raised PS prices between November 2020 and May 2021 by 30% more than they incurred in raw-material costs. She anticipated PS prices would drop 9¢ to 10¢/lb in July based on July benzene contract-price nominations of $3.10 to $3.20/gal. She expected August PS prices to be flat to lower. “If benzene prices stay at the lower levels, PS processors will seek further price concessions from suppliers.” Both sources characterized demand as soft in packaging, medical and building & construction sectors.

PVC prices moved up 1.5¢ to 3¢/lb in June, as suppliers aimed to implement a 3¢ price hike, according to Mark Kallman, RTi’s v.p. of PVC and engineering resins, and PCW senior editor Donna Todd. This deterred suppliers from issuing an increase for July, while they tried to push through the full June increase. Todd reported that July was the first month this year without a new price increase on the table. 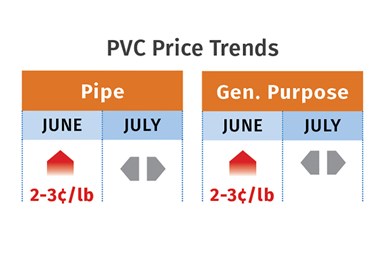 Kallman ventured that PVC prices had now peaked, citing a drop in both ethylene prices and exports. One caveat: Chlorine prices had moved up due to unplanned production disruptions in May-June. Noting that all PVC suppliers produce both ethylene and chlorine, Todd said ethylene prices dropped a total of 13¢/lb in May and June, giving PVC suppliers feedstock cost relief on that half of the molecule. Kallman thought July would see the market stabilize with August also likely to see flat resin pricing. “We were heading for stability in the third quarter and there was hope of restoration of inventories.”

PET prices appeared to be flat going into July, though suppliers were attempting to implement surcharges in the range of 2¢ to 4¢/lb. RTi’s Kallman noted that there did not appear to be any uniformity in the implementation of these surcharges and reported that prices of key feedstocks paraxylene and PTA were pretty flat through June. He ventured that PET prices had potential to move up slightly, about 0.5¢/lb, by July’s end, but could drop a bit in August, based on feedstock pricing. 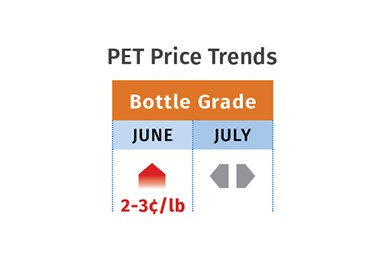 Kallman characterized the market as tightly balanced and noted that most processors were getting what they needed, but not more, This came as the summer demand for single-use bottles was underway, though Kallman saw the retail PET bottle business starting to flatten as the COVID-19 emergency was waning. He noted that PET imports appeared to have slowed since end of April due to container logistics and could stay lower right into the fourth quarter.