Sustainable fishing by 2025: What is the current situation in Indonesia? | Environment | All topics from climate change to conservation | DW

When the Indonesian government announced plans to make the country’s fishing industry sustainable in early 2019, Arifsyah Nasution welcomed the news. The ocean campaign leader for Greenpeace in Southeast Asia has long been sounding the alarm about endangered fish stocks in Indonesian waters. But he is skeptical that the situation will change much by 2025.

With more than 7 million tons of catch annually, Indonesia is the second-largest fishing nation after China. Most is for domestic consumption, with the 270 million-strong population eating more than three times as much fish and seafood as the global average. 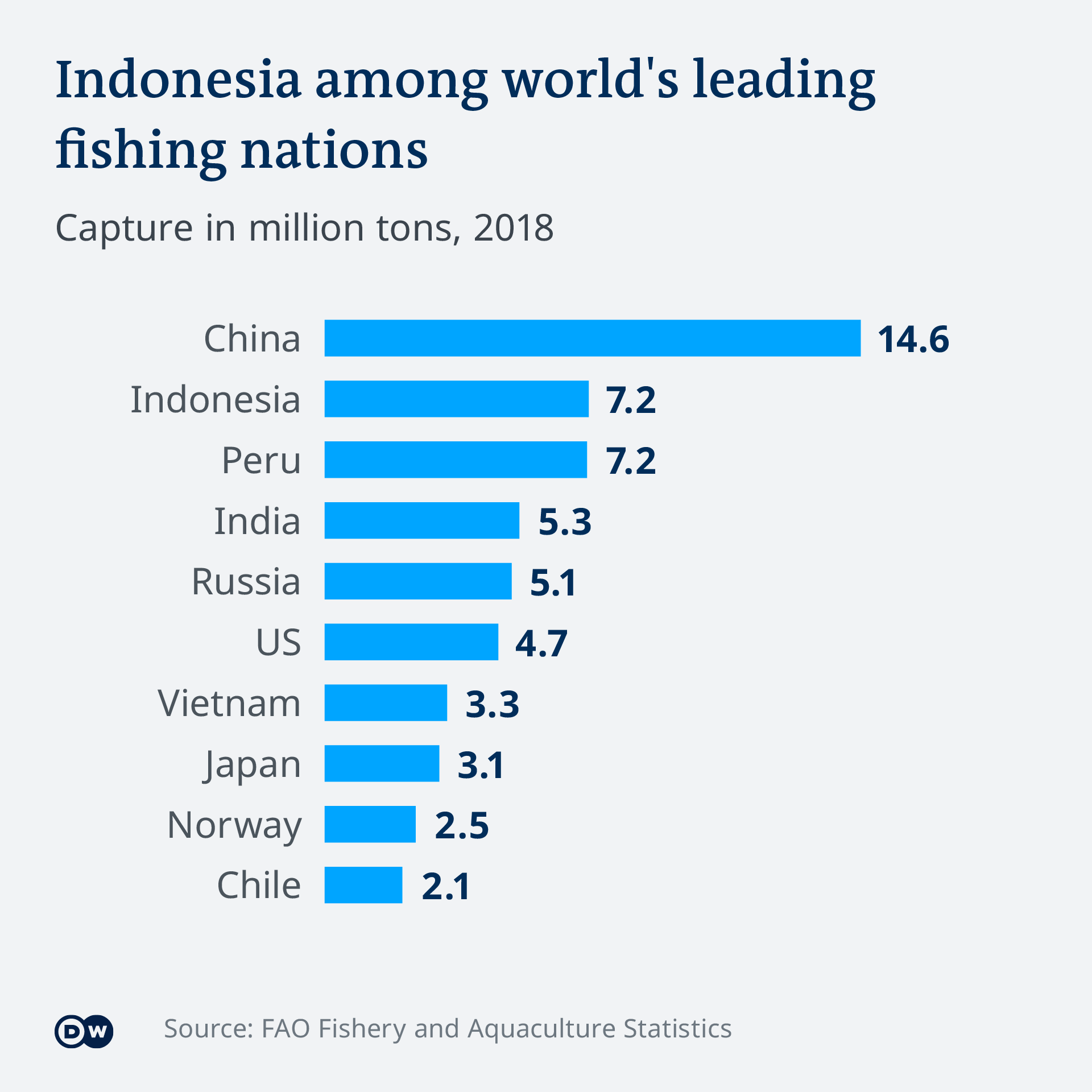 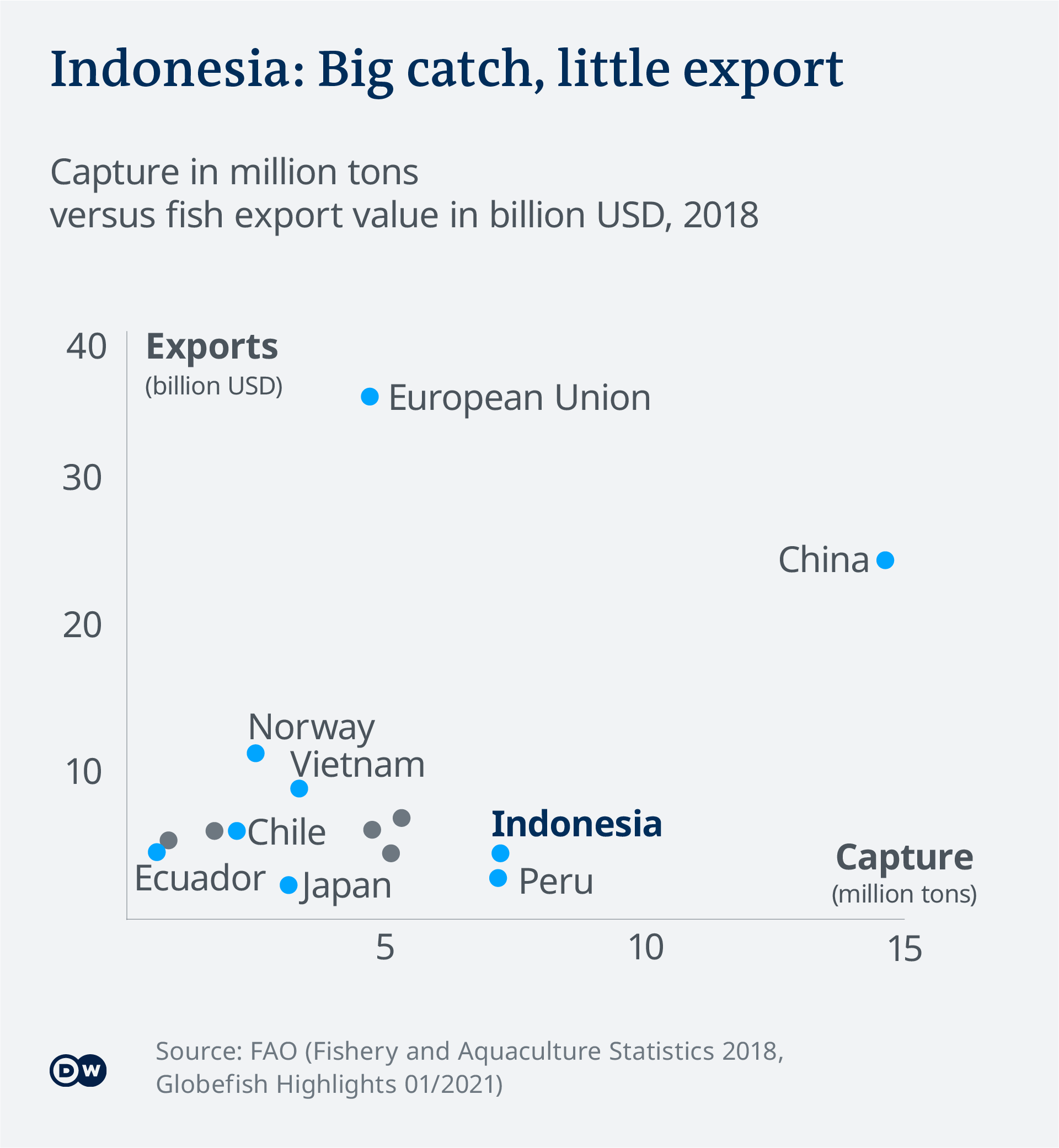 However, this has wide-ranging consequences: Most fish stocks in Indonesia are completely depleted or already overfished. According to the Ministry of Marine Affairs and Fisheries, 90% of Indonesian boats draw their catch from areas that are already overfished and overcrowded with boats.

Indonesian waters are home to 37% of the world’s marine species, many of which are endangered as a result of fishing. Shrimp, for example, are already overfished in more than two-thirds of Indonesian waters, and are therefore becoming increasingly rare. Quotas have already been exhausted in other parts of the country too. 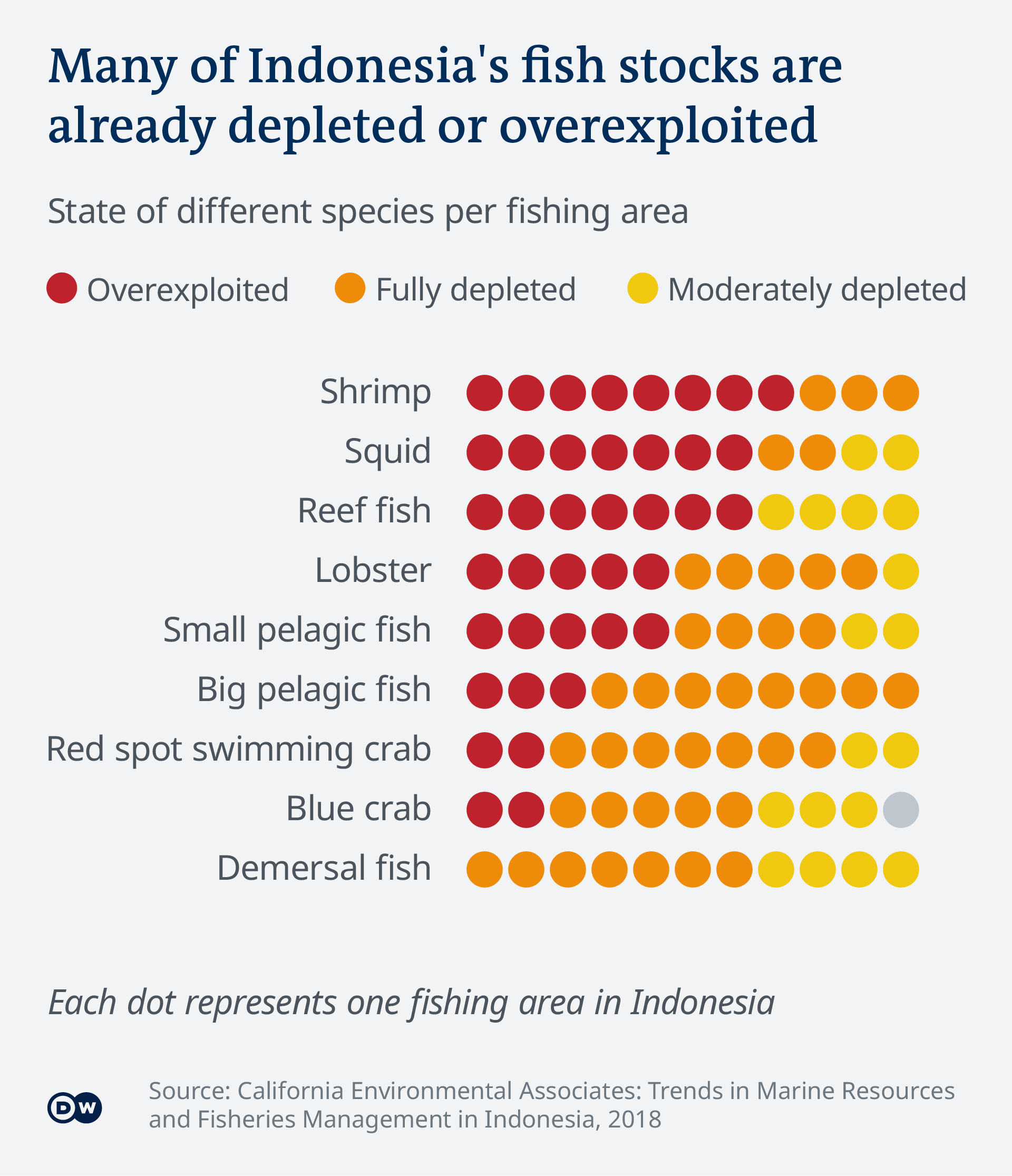 The decline in stocks is alarming. The problem is not easy to solve though, because often the economic aspect, the sales volume, is in the focus. Nasution told DW “it’s not about the demand of the world market, but the survival of the Indonesian population.”

Subsidies as drivers of overfishing

Subsidies in Indonesia’s fisheries sector – for example lower fuel prices and tax deductions – have also contributed to a steady increase in catches over the past decades. 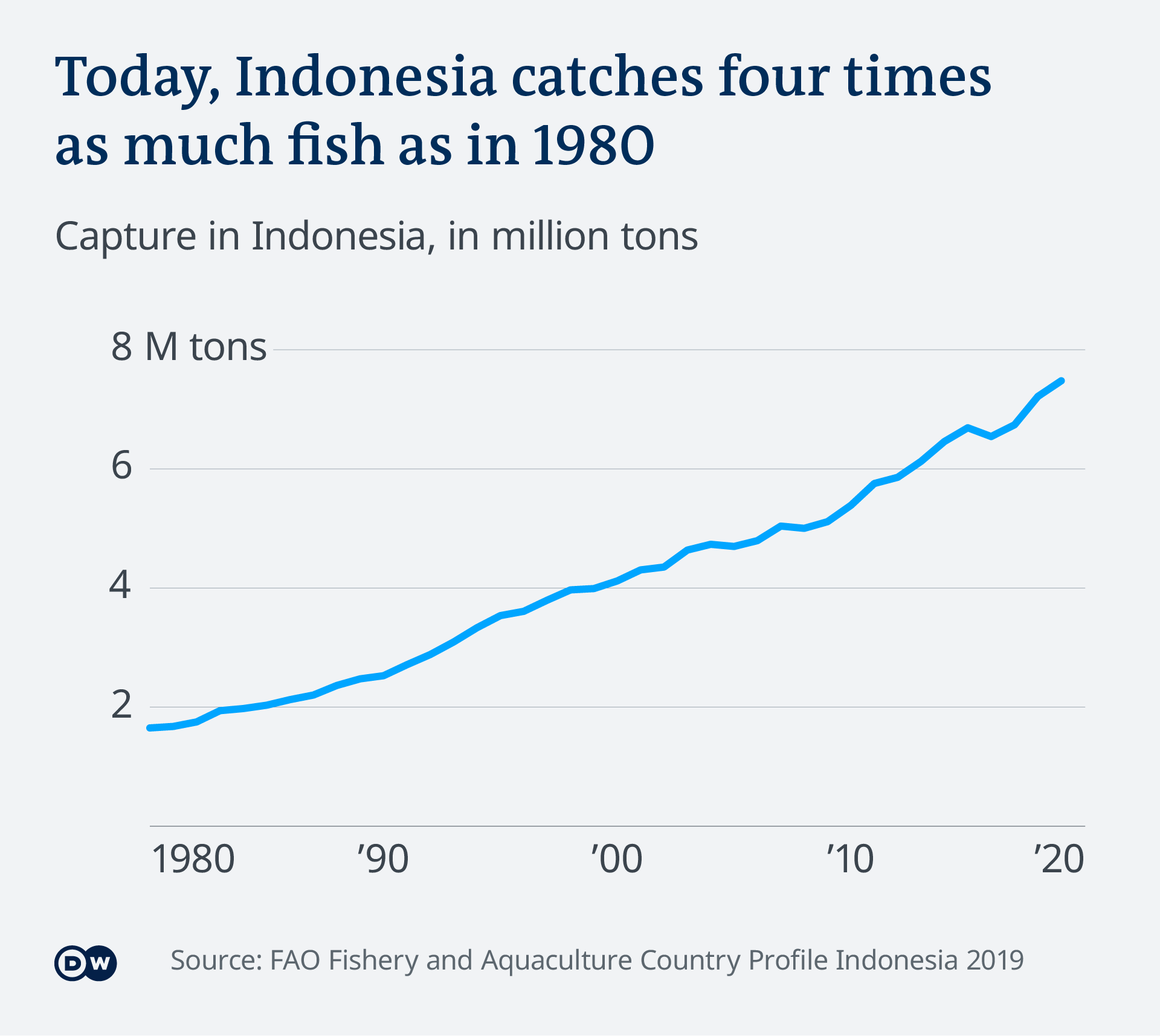 Many scientists are therefore critical of them: harmful subsidies can lead to overfishing, loss of biodiversity and destruction of marine areas. This happens, for example, when fishing is undertaken beyond sustainable levels or when subsidies encourage harmful fishing practices. More than 60% of global subsidies in the fishing industry are potentially harmful to the oceans, according to a study by the University of British Columbia in Canada.

The World Trade Organization has been advocating for the abolition of harmful subsidies in the fishing industry since 2001, but has so far not been successful. “Two decades is too long for ending subsidies that finance the relentless overexploitation of our ocean. […] We need these rules for the sake of the environment, food security and livelihoods worldwide,” WTO Director-General Ngozi Okonjo-Iweala said in a speech marking World Ocean Day in June.

Turning subsidies from harmful to beneficial

So far, Indonesia is subsidizing fisheries more than other developing countries, spending over $932 million (€825 million) in 2018. Peru, which catches almost as much, spends only a third as much as Indonesia on subsidies for the fishing industry. 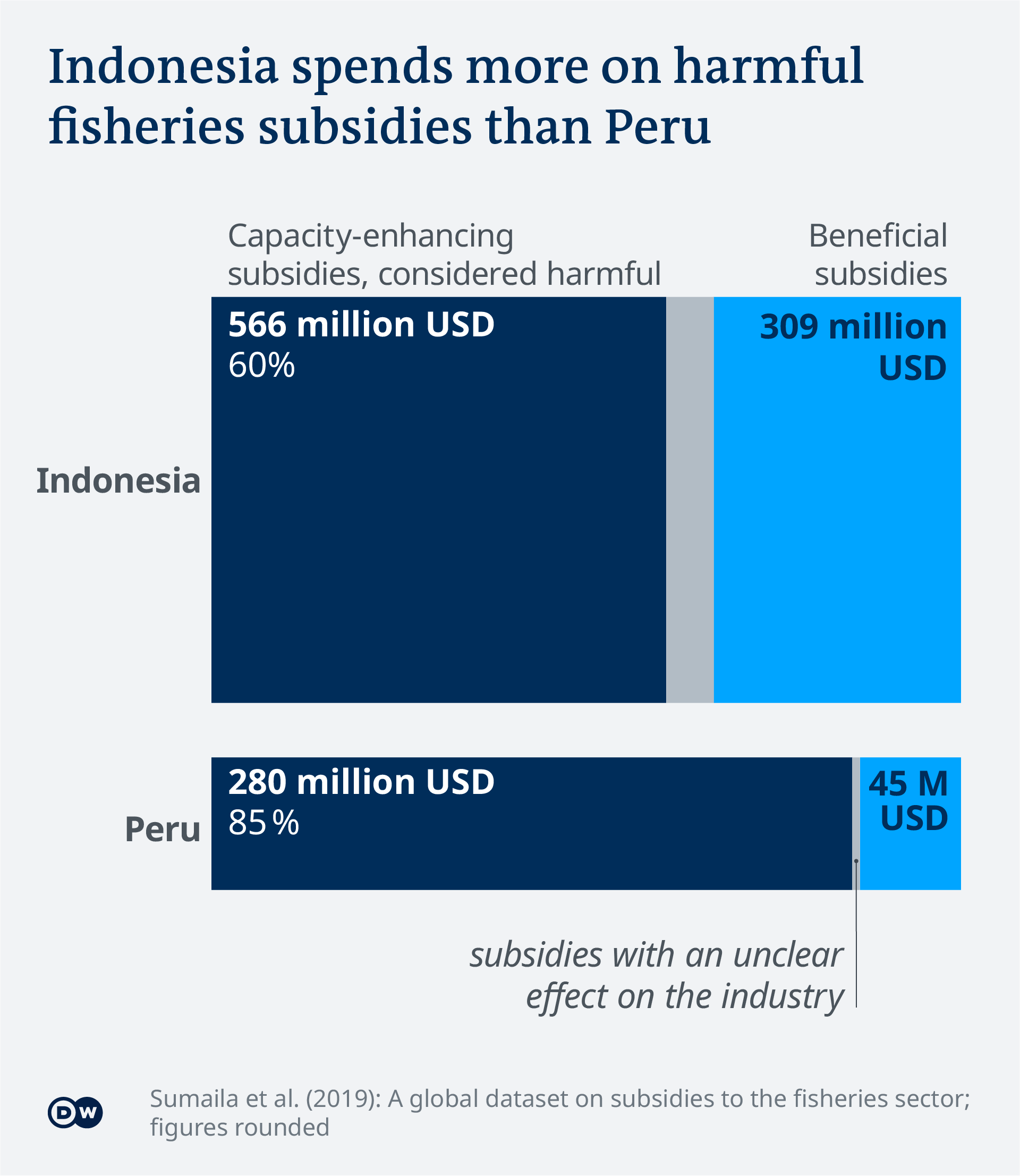 Indonesia spends more on capacity-enhancing, harmful subsidies (60%) in total USD, but as a percentage, Peru’s spending is much higher. Such capacity-enhancing subsidies entail support for boat construction and renovation as well as bigger projects such as fishing port developments.

Although small-scale fishing operations account for almost 95% of the sector, experts say it is mainly the fishing fleets of large-scale industry that benefit from subsidies. 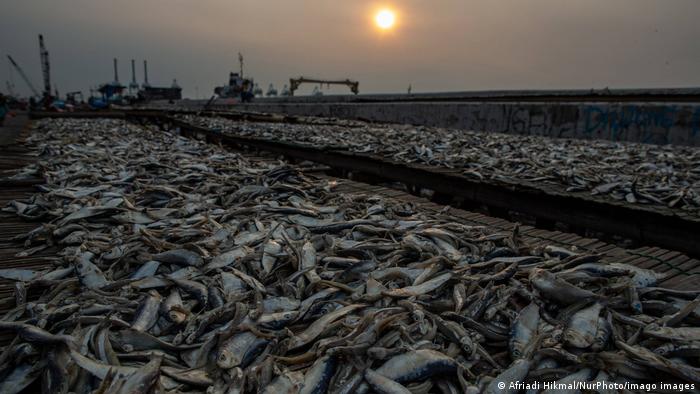 A fisherman dries his catch in a village near Jakarta, Indonesia

On the other hand, targeted, beneficial subsidies can help maintain biodiversity and protect ecosystems. In Indonesia, about one-third of subsidies have so far been used for this purpose. Some of the funds have gone toward the promotion of marine protected areas, which are intended to protect threatened ecosystems from human exploitation.

One successful example is Raja Ampat in eastern Indonesia, where several marine protected areas were designated in 2004. They now cover 4.6 million hectares (11.3 million acres) and are considered the most biodiverse protected region in the world, home to more than 1,600 species of fish and hundreds of corals. The abundance of fish attracts many tourists — but also some poachers, who have repeatedly caused damage by fishing with dynamite, for example.

Worldwide, however, Raja Ampat is considered a success story for the cooperation between NGOs, the local fishing communities and the Indonesian government. NGOs focused more on research and communication to increase public awareness and inform stakeholders. The government, for example, focused more on establishing structures such as a monitoring force to protect the area. 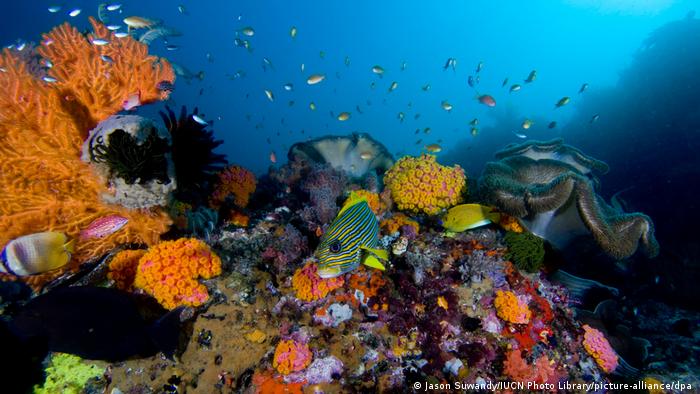 Raja Ampat, home to 75% of the world’s known stone corals, is considered the richest coral reef on Earth

However, protected areas can’t be established everywhere, and it’s not yet possible to completely phase out harmful subsidies. With entire industries depending on these funds, there is a risk of economic collapse without them, said Simon Funge-Smith, senior fishery officer at FAO’s Asia-Pacific regional office in Bangkok, adding that the consequences would be far-reaching. “The loss of jobs, the loss of livelihoods is political dynamite.”

Almost 7 million people are employed in Indonesia’s fishing industry. If the government suddenly stopped all harmful subsidies, small-scale fishermen in particular would suffer, according to Indonesia for Global Justice, an NGO that advocates for a fair-trade system.

The government must therefore plan carefully, gradually converting harmful subsidies into beneficial ones while continuing to ensure the industry’s economic viability, Funge-Smith said.

But that’s easier said than done. In recent years, there has been little continuity in Indonesia’s Ministry of Marine Affairs and Fisheries. Since 2019 alone, the minister in charge has changed several times. As a result, a ban on particularly harmful trawl nets was temporarily lifted in November 2020 before it was reintroduced in July 2021. 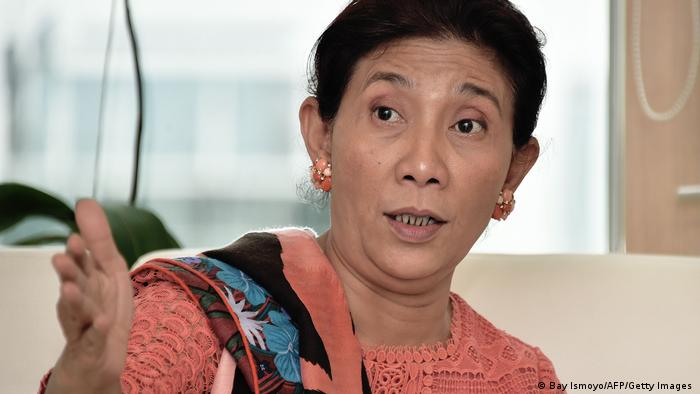 Nevertheless, in order to encourage responsible fisheries management, “all stakeholders including the civil society need to continue and to focus on advocating the Indonesia fisheries issues at local, national and international levels,” said Greenpeace’s Nasution.

After all, he said, the ministry’s knowledge when it comes to sustainable fishing has increased greatly in recent years. However, leadership problems in the ministry and the government’s focus on attractive investments from abroad has hindered these efforts. Foreign investment is primarily focused on profit, which increases the pressure on marine resources.

From 2014, the Indonesian government used radical methods against illegal boats, sinking more than 300 foreign and domestic vessels within four years. The number of foreign fishing boats dropped by a quarter, yet local fishermen were more active, according to a study by the ministry and American and Indonesian researchers from various universities. The authors observed an overall recovery of fish stocks in that time, but noted the risk that this would be wiped out by a strong increase in local fishing. 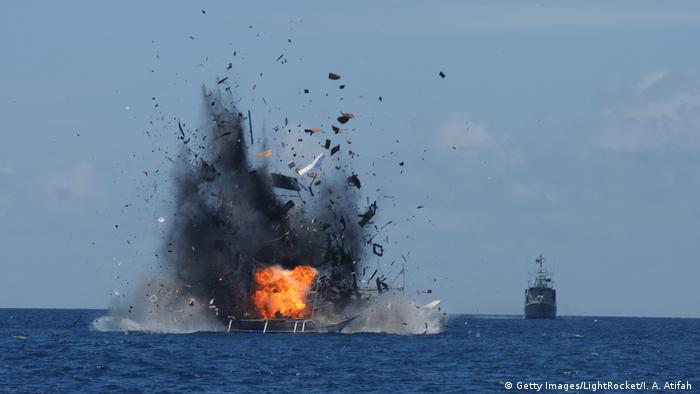 No data, no control

Another crucial problem in combating overfishing is the lack of reliable data to monitor compliance with regulations and to make the necessary decisions to protect the ocean. The mere size of the Indonesian archipelago, with its 17,5000 islands and over half a million fishing boats, makes monitoring tricky. And most boats don’t have onboard electronic devices to facilitate tracking. 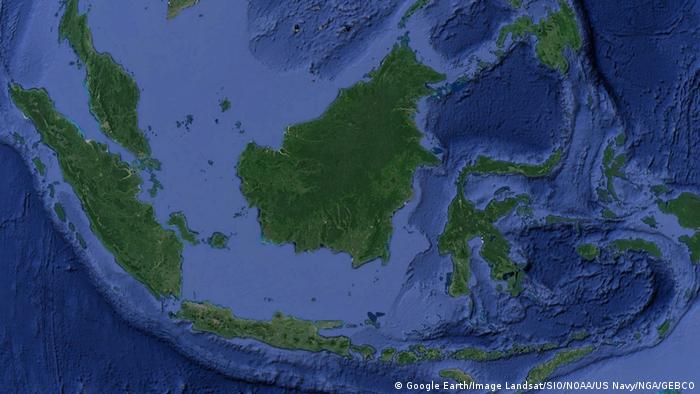 With more than 17,500 islands and 60% of Indonesia’s territory covered by water, fishing boats are difficult to monitor

Several pilot projects could provide a solution. One of these is FishFace, which automatically records catches and species using connected cameras on board. The technology enables remote monitoring in real time.

Such developments give observers, including Funge-Smith, reasons to be optimistic, even if Indonesia ends up missing its stated goal of sustainable fishing by 2025. “Any progress towards that goal is great,” he said.

DW’s Arti Ekawati contributed to this piece. It was edited by Anke Rasper, Gianna Grün and Martin Kübler.