Ships Discharge 10,000 Cubic Meters of Plastic a Year From Sewage 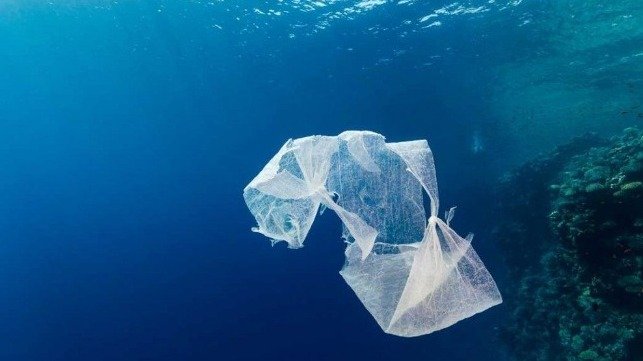 The GESAMP Working Group 43 – a group of independent scientific experts, has recently completed a comprehensive review of various sea-based sources of marine litter [1]. The study reveals that quantifying the sources can be challenging due to a lack of information. To contribute to this important initiative, this short article reviews the screenings material in ships’ sewage and grey water as a sea-based source of marine litter. About 10,000 m3 of screenings are estimated to be deposited into our oceans every year. This sea-based source of marine litter is unfortunately permissible under the Annex IV of MARPOL Convention that regulates sewage pollution from ships. 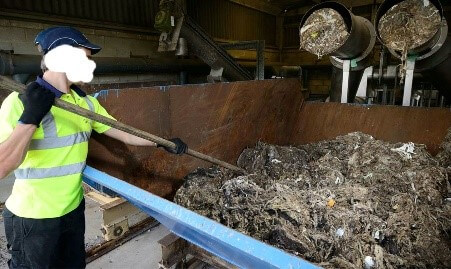 Municipal wastewater on land contains litter such as plastics, rags, paper, wipes, etc. It is intercepted by the inlet screens of wastewater treatment works (WWTWs) to prevent it from entering downstream processes or mixing with sewage sludge [2]. The intercepted sewage screenings material is often washed and dewatered on site before it is taken away to be incinerated or landfilled as a non-hazardous waste [3].

Importantly, the screenings-free sewage sludge can be recycled as a natural resource without being hampered by the inclusion of macro-plastics, the presence of which has increased dramatically in wastewater since the 1980s. 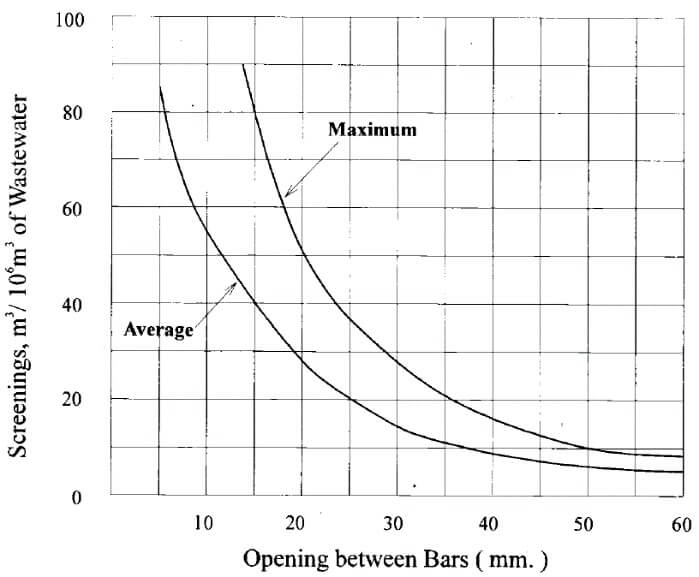 Inlet screens with a finer opening can intercept more screenings (Figure left) [4]. A 12 mm opening is found to intercept 44 -110 litres of screenings per 1,000 m3 of wastewater processed, which has a density close to 1 kg/m3. In other studies, 3-6 mm openings are found to intercept 0.5-3.5 kg of dewatered screenings per capita per year [4-8]. Recent research suggests that 73% of the mass of plastics in wastewater, which includes both macro and micro plastics, can be intercepted by screens with opening sizes down to 2 mm [9].

A ship’s black and grey water also contains litter such as plastics, wipes, paper, and rags, etc. The use of cutter pumps on the vessel’s collection systems can render coarse screens ineffective. Advanced wastewater treatment (AWT) systems often use fine screens or sieves of 0.5 – 2mm. 2 mm screens can intercept 10 kg of dewatered screenings per person per year [10,11], which is greater than that intercepted by the 3-6 mm screens on land. Dewatered screenings are found to have higher levels of pollutants than that of raw sewage (Table at left).

At any given time, there are some two million people at sea. With a black and grey water generation rate of 200-300 liters per person per day, the amount of screenings contained in ship sewage and grey water can be estimated in the magnitude of 10,000 m3 per year.

A sea-based source of marine litter under MARPOL Convention

Grey water is not regulated by the MARPOL Convention. So, litter in grey water can be discharged without restrictions [12].

Litter in a ship’s sewage is defined as ‘visible floating solids’ under MARPOL Annex IV. These solids can be discharged to sea from sewage holding tanks when more than 12 nautical miles (nm) from the nearest land, or discharged from comminuting and disinfecting systems (CDS) [13] when beyond 3 nm.

The discharge of visible floating solids from type approved sewage treatment plants (STPs) is prohibited, even though the majority of STPs discharge ‘virtually raw sewage’ [14,15]. Regardless, sewage screenings still find their ways into our oceans [16], nota bene from ships installed with onboard STPs/AWTs. All of this is permissible under MARPOL.

To start with, STPs, along with their inlet screens, can legally be switched off when outside 12 nm. This is unfortunate because many STPs are designed, approved and operated to do exactly that. 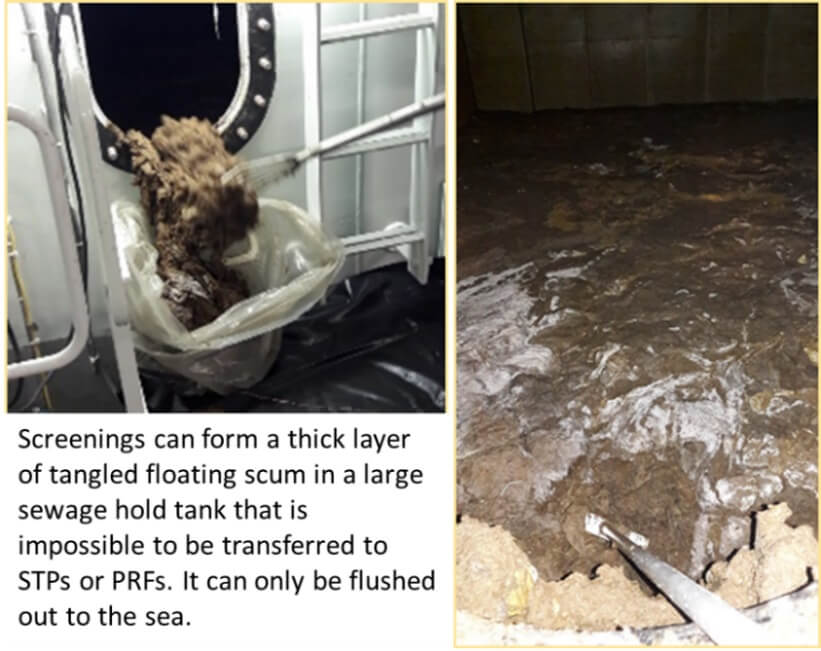 Importantly, some screenings entering a large sewage holding tank tend to form a thick layer of floating scum (image left). It is impossible for an STP or a port reception facility (PRF) to collect it. The accumulated screenings can only be flushed out from the tank directly into the sea.

Furthermore, some STPs have inlet screens with very coarse openings which may not be effective for incepting screenings when cutter pumps are widely used in ship sewage collection systems. Some STPs have gone a step further by opting for ‘fine maceration’, which is purposely designed to avoid intercepting any screenings at all [16]. After all, STP type tests on land are not often challenged by sewage screenings, because a test rig often draws sewage after WWTW inlet screens and/or through a strainer.

In some cases, the intercepted screenings are re-mixed with liquid sewage sludge that is intended to be dewatered, dried and incinerated on board. But in the absence of recording and reporting requirements, its fate is far from clear. Attempt to address this issue in isolation (PPR 8/7, 2021) will not stop screenings from becoming marine litter via the many above-mentioned alternative routes, all of which are permissible under the MARPOL Convention.

Screenings material can be effectively intercepted before it reaches a ship’s sewage and grey water storage and treatment systems. This is feasible and proven on some ships. Such interception is needed on all applicable ships whilst in all waters, and hence be independent of the STPs. At a time when our society calls for renewed and urgent efforts to reduce the input of litter into our oceans, one may hope that the issue can be acknowledged and reviewed by the maritime policy makers in the not too distance future.

[3] The treatment and disposal of sewage screenings and grit, by B. Thompson, 2012.

[14] Sewage from Ships – Rules and Realities, by W Chen, 2018, https://www.maritime-executive.com/editorials/sewage-from-ships-rules-and-realities-1


The opinions expressed herein are the author’s and not necessarily those of The Maritime Executive.