How private equity has boosted various links in value chain 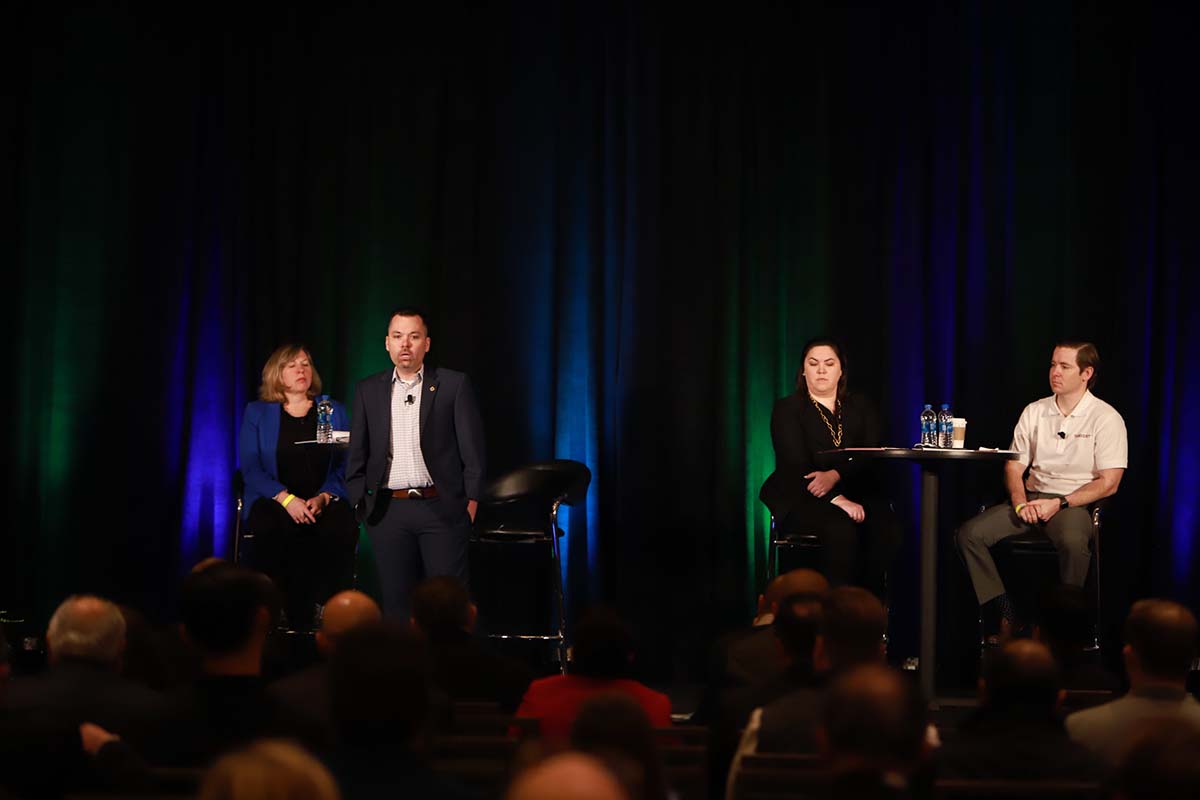 But far from gutting the team, the investors kept the staff members and their collective expertise intact. That’s a pattern Evergreen has followed as it acquires other PET reclaimers, Johnson said.

“One of the keys to all of our acquisitions is the expertise that comes with them,” he said. “That’s certainly a part of the value of each of the facilities that we’ve acquired.”

Johnson, who is now general manager of resin and recycling for Evergreen, was speaking on the “Private Equity Impacts” panel at the Plastics Recycling Conference, held March 7-9 in National Harbor, Md., near Washington, D.C.

Joining him in the session, which drew nearly 200 audience members, were Alexandra Tennant, senior analyst for PET/RPET at Wood Mackenzie, and John Griffin, director at The Sterling Group. Moderating the session was Maite Quinn-Richards, managing director at Closed Loop Partners and co-lead for the company’s private equity fund.

Investment money has been flowing into the plastics recycling industry as demand from consumer product brand owners increases, the speakers noted. At the same time, consistent reductions in overseas scrap markets in recent years has laid bare the need for additional processing capacity in North America.

Tennant illustrated the gap between PET scrap supply, production capacity and demand now and in years to come. After analyzing recycled-content goals from a dozen major companies, she found the companies will need 240% more RPET between 2020 and 2025, or over 2.4 billion pounds, to meet their goals. That doesn’t factor in the additional demand that’ll be stimulated by extended producer responsibility (EPR) and minimum-recycled-content regulations coming on-line around the world, she said.

A Wood Mackenzie 2021 forecast found that consumer demand for RPET is expected to grow 270% between 2018 and 2025. At the 2025 level of RPET production, food-contact packaging would average 22% recycled content, she said.

The capacity isn’t anywhere near enough to meet those goals, Tennant said. She also noted the price volatility for PET bales recently. According to RecyclingMarkets.net, the U.S. average price jumped from under 27 cents a pound to over 33 cents, or up 24%, over just the past month.

“Overall, the partnership with Sterling and our expertise, coupled with the current demand in the market, has really driven our expansion in the market.” -Greg Johnson of Evergreen

But rising prices for bales aren’t translating to greater supply from curbside programs, Tennant noted, and those rising prices hike up costs for investments in the plastics recycling space.

“I think it’s important to recognize that kind of cost-carry requirement and the support that investment needs from any kind of corporate funding partner to expand infrastructure that’s needed from a demand side,” she said.

Founded in 1998, Clyde, Ohio-based Evergreen was started as a division of Polychem Corp. (now called Greenbridge), to which it supplied PCR for use in plastic strapping. The family-owned company grew over the years to eventually occupy 240,000 square feet and employ 140 people.

The Sterling Group, a Houston-based private equity firm, acquired Polychem and Evergreen in 2019. The Sterling Group brought its knowledge, backing, research and other capabilities to drive Evergreen’s growth, Johnson explained.

“Since then, we’ve dramatically changed the landscape of our company and become a market leader,” he said.

A year ago, Evergreen began a $22 million expansion project at its Clyde, Ohio recycling plant. The project is slated to boost that facility’s capacity to produce clear food-grade RPET from 40 million to 80 million pounds per year. Later in 2021, the American Beverage Association (ABA), Ohio Beverage Association and Closed Loop Partners announced their combined $5 million investment in the expansion.

Since beginning that project, Evergreen has also bought three PET recycling plants. The company bought the former CarbonLite facility in Riverside, Calif. in June 2021, after CarbonLite filed for bankruptcy earlier in the year. In November 2021, Evergreen acquired UltrePET plants in Albany, N.Y. and Amherst, Nova Scotia. The acquisitions give the company a coast-to-coast footprint in and near bottle-deposit and non-bottle-deposit states.

At a total capacity of 147 million pounds of food-grade RPET per year, Evergreen is now one of the largest RPET producers on the continent.

“Ultimately, we wanted to be a full-service provider to our customers all the way across the full network, not just a regional supplier,” Johnson said.

In 2021, Evergreen invested in sorting robots provided by AMP Robotics. Units were installed in Clyde in April 2021 and Riverside in August 2021. More recently, the company announced it will install additional sorting robots at the recently acquired Albany facility – with installation scheduled for mid-2022 – giving Evergreen 15 total robots.

The robots are a small part of the total $200 million Evergreen has invested in the company over the past year. When the company’s Clyde expansion project is completed this year, Evergreen will have a total RPET production capacity of 217 million pounds per year, according to a press release.

“Overall, the partnership with Sterling and our expertise, coupled with the current demand in the market, has really driven our expansion in the market,” Johnson said from the stage.

Since its acquisition by The Sterling Group, Tangent has gobbled up a number of other companies, including the companies Home & Leisure and Vinyl Tech in 2019 and Bedford Technology in 2020.

“Tangent’s story has been one of expansion through partnering and acquiring other businesses, really driven by capability, and then investing in those,” said Sterling Group’s Griffin, who also worked for Tangent.

More recently, Tangent acquired 1.2 million square feet in Montgomery, Ill. vacated by Caterpillar and revamped it to serve as the company’s Manufacturing Center of Excellence.

Since its acquisition by The Sterling Group, Tangent has spent or planned over $60 million in capital investments in Tangent and its companies from 2020 through 2022, Griffin said. Each of those years includes more capital expenditures than Tangent spent from its 2003 through 2017, combined, he said.

“Each of the three years of the capital programs under our watch have been the largest in the company’s history,” he said.

“Tangent’s story has been one of expansion through partnering and acquiring other businesses, really driven by capability, and then investing in those.” -John Griffin of The Sterling Group

Griffin said that when Sterling acquires a company, its goal is to accelerate the great work the company is already doing and de-risk it. When asked how reclaimers can ensure private equity firms don’t come in and slash expenses to generate fast returns on their investments, Griffin noted that it’s “very hard to grow a company by just cutting costs.”

“Most investors, they have to sell the company to someone at some point, and that next investor or buyer wants to have a sustainable, growing, healthy business,” he noted. “So at least in our experience and certainly how we’ve partnered with teams, that’s not been the focus or the way in which any sort of return is generated.”

“Private equity is looking for long-term sustainable growth,” Johnson said. “Yes, they want rapid growth, and we work very quickly – I think my team would certainly tell you that the pace we work at now compared to three years ago is much quicker, but I think everyone enjoys it. It’s not sustainable to just come in and cut costs. That doesn’t make a marketable company. And that’s not what private equity is about, at least not the views of private equity that I’ve seen.”