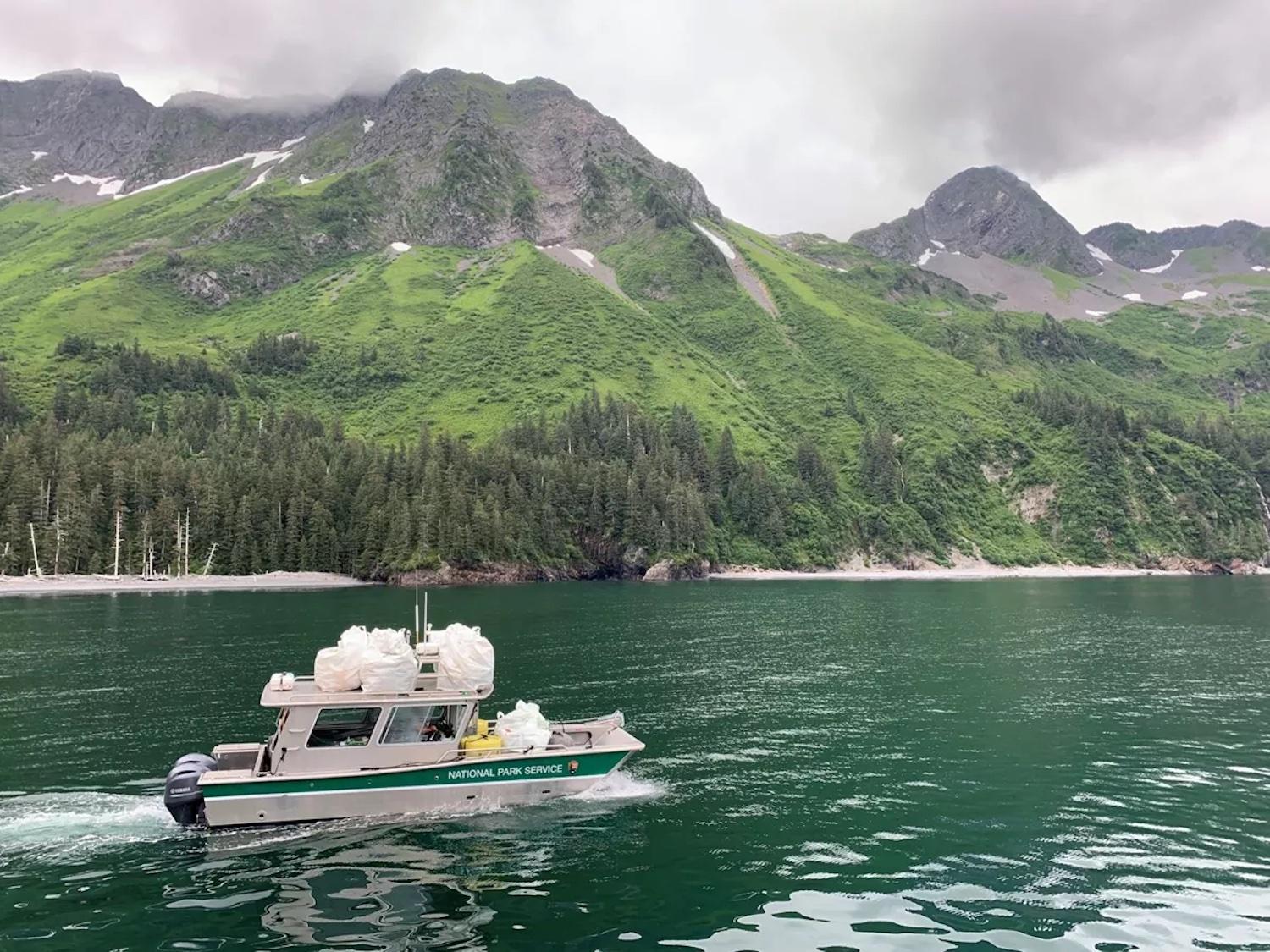 Plastics and other marine garbage is a problem across National Park System units, including Kenai Fjords National Park, where they collect the coastal trash and haul it by boat to Seward for disposal/NPS file

“It’s pernicious and persistent. We’ll be finding this for years. I guarantee it,” said Ludwig, manager of the Marine Debris and Plastics Program at the Center for Coastal Studies, an independent, nonprofit member-supported organization in Provincetown, Massachusetts, that works to protect and preserve marine ecosystems. Of the 20,000 feet of tubing lost, only 2,000 feet of the lightweight, hollow plastic has been found, and some as far away as the Bay of Fundy.

In addition to being unsightly, the small plastic pieces can be ingested by birds and other wildlife at the national seashore.

Another problem with the plastic is that it does not biodegrade. When discarded pieces of plastic debris, including bottles, bottle caps, cups, bags, and fishing gear, are exposed to sunlight and waves, the plastic breaks into smaller pieces – some less than 5 mm in diameter — known as microplastics that wildlife can confuse for food.  Harmful chemical pollutants can attach to the plastics, increasing the toxicity of the debris consumed by wildlife and marine life and, potentially, humans eating the marine life. 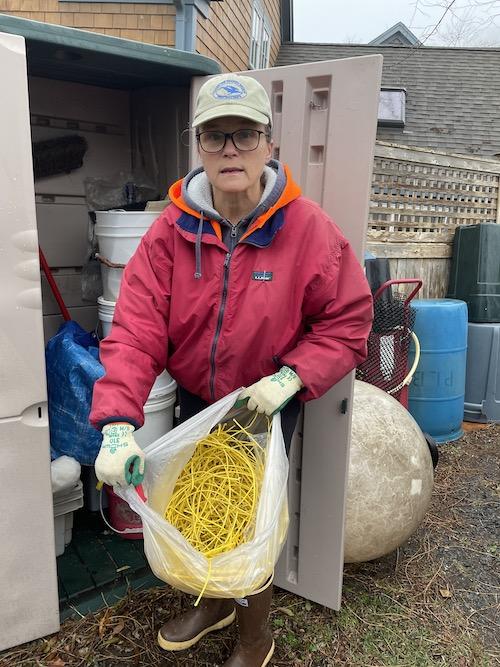 Plastic waste enters the oceans at a “staggering” rate – about 8 million tons are dumped in the world’s oceans each year, according to testimony presented by Tony Radoszewski, president and CEO, U.S. Plastics Industry Association, before the House Subcommittee on Water, Oceans, and Wildlife in 2019. This amount is a fraction of the two garbage-truck loads of plastic that the environmental organization Oceana estimates are dumped into the ocean each minute of every day.

At the time, Deb Haaland chaired the House Subcommittee on National Parks, Forests and Public Lands and participated in the 2019 hearing.  Now Secretary of the Interior, Haaland tweets and says she carries a reusable water bottle and avoids single-use plastics that could end up in national parks and the ocean.

Last summer, 300 environmental, business, animal rights, religious, and other organizations called on Haaland to eliminate the sale or distribution of single-use plastics in national parks. So far, she has not taken public steps to direct parks to stop selling plastics, and her office did not respond to an email from the Traveler asking about her plans.

“It’s going to take all of us working with the National Park Service to try and remove single-use plastics in national parks,” said Sarah Gaines Barmeyer, the senior managing director of conservation program for the National Parks Conservation Association.

Former NPS director Jon Jarvis issued a policy in 2011 allowing park superintendents to halt the sale of disposable plastic water bottles if they informed visitors of the environmental impact of plastics, sold reasonably priced reusable bottles that could be filled at bottle stations within the park, and received approval from regional directors. The Trump administration rescinded the policy in 2017. While legislation has been introduced by U.S. Rep. Mike Quigley, D-Illinois, calling on the National Park System to reduce disposable plastic products and, if applicable, eliminate the sale and distribution of disposable plastic products, Congress reportedly wants the Biden administration to take the lead.

Hugh Hawthorne, superintendent at Assateague Island National Seashore in Maryland and Virginia, might consider asking the park’s concessionaire to refrain from selling water in plastic bottles in future contracts. But he said most parks will be reluctant to do this without a mandate from Washington because the issue “is a hot potato.”

Meanwhile, plastic accounts for up to 90 percent of the trash floating in the oceans and littering shores. Vanessa McDonough, fishery and wildlife management biologist at Biscayne National Park in Florida, has seen sea turtles strangled and entangled by the polypropylene lines used in commercial traps, along with countless birds harmed or killed due to entanglement in monofilament fishing line. An endangered smalltooth sawfish was injured after it, too, got tangled in polypropylene fishing line. The same story holds true for reef organisms, including sponges, soft corals, and stony corals killed or injured by nets as well as fishing and trap lines.

Like parks across the country, Biscayne involves its staff and volunteers in trash removal efforts.

Last month the park “removed 30,881 pounds of debris from sea turtle nesting beaches and mainland shoreline habitats, doing so with the help of 251 different volunteers,” from across the country, said McDonough in an email.

In a short-term study last year, 77 percent of the 3,402 pounds of garbage collected during a six-day period at Biscayne was plastic, and there also were illegally dropped anchors that lodged in the segment of Florida’s Coral Reef that lies within the park, smashing corals, sponges, and other organisms. This year, the amount of trash collected at Biscayne is expected to be greater than the 70,000 pounds volunteers picked up throughout 2021. So far, more than 37,000 pounds of debris has been collected .

“Volume-wise, this debris is overwhelmingly plastic. By weight, it is also substantial, “ she said.

Over the last five years, Biscayne has also tallied more than 2,600 balloons found on sea turtle nesting beaches. Similarly, at Fire Island National Seashore in New York, Mylar balloons are “all over the beach, all the time” said Michael Bilecki, the seashore’s chief of resources management. 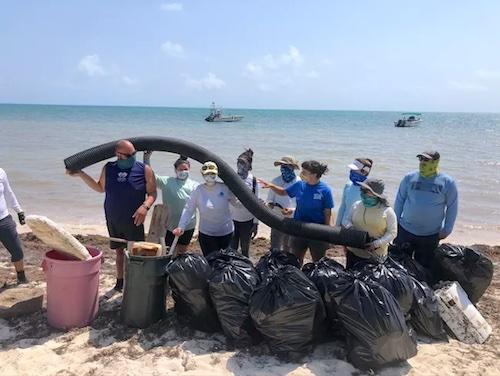 Marine debris also is negatively impacting foraging and nesting habitat for shorebirds and sea turtles at Cape Hatteras National Seashore in North Carolina. At Padre Island National Seashore in Texas, sea turtles have to navigate through the trash to lay eggs on the beach and their hatchlings have to crawl around the trash on their way to the ocean. This is stressful for animals who spend most of their lives in the ocean, said Kelly Taylor, Padre Island’s public information officer.

Since 2019, Padre Island has worked with the National Oceanic and Atmospheric Administration to annually collect debris every five miles along the seashore’s 60-mile-long coast. “We’ve found everything from fishing nets to plastic dinosaur toys, but the most commonly collected items are single-use plastics, particularly bottle caps,” said Shelley Todd, chief of resource management.

Plastic bottle litter is not a significant problem at Assateague Island, said Superintendent Hawthorne. Visitors to Assateague are encouraged to refill their own bottles at water-filling stations in the park.

Another source of trash at Assateague are tires, likely coming from a manmade offshore reef, and which can be an eyesore at the national seashore. At one beach clean-up effort, the park filled three full-size pickup trucks with tires. But the biggest concern at Assateague are the birds that get wrapped in discarded fishing lines.

“They are probably going to drown before someone notices them,” said Hawthorne, especially during the offseason when the park staff is smaller and there are fewer visitors to report sightings.

Plastic bottles are generally not a problem at Cumberland Island National Seashore in Georgia, either. Most visitors take their trash with them when they depart the park that sits on an island off the coast.

But “trash, including plastic, washes up more frequently during the shrimping season when some refuse is dumped off of boats. A tropical storm may also bring trash up on the beach, as floodwaters wash through developed areas,” wrote Jill Hamilton-Anderson, the park’s interpretation and education manager, in an email.

A study led by Stefanie L. Whitmire at Clemson University from 2015-2017 found widespread plastic pieces in the sand on beaches in 35 national park units on the Atlantic and Pacific oceans and Great Lakes, including in remote locations in Alaska and American Samoa. Apostle Islands National Lakeshore in Wisconsin had some of the highest plastic loads, likely coming from nearby St. Louis River.

“The presence of microplastics in the marine environment poses risks to wildlife and human health,” Whitmire’s study found. 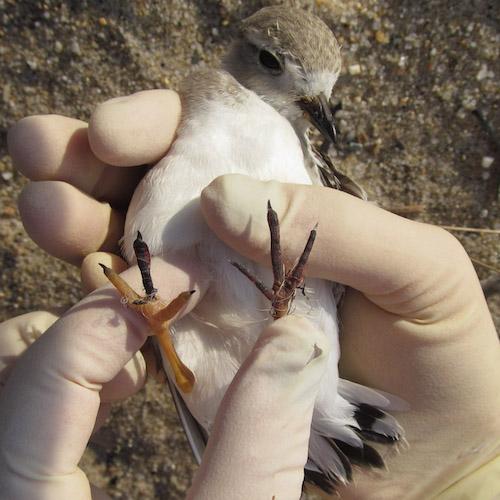 Wildlife, such as this piping plover at Cape Cod National Seashore, can become entangled in discarded fishing line/NPS

Radoszewski, the plastic industry’s president testifying before Congress in 2019, disagrees with this approach.  “In many cases, what is broadly considered a ‘single-use’ plastic product, is the more environmentally sound choice when considering the manufacturing process, shipping, and recyclability over the life of the product,” he said. He touted the environmental benefits plastic bags have compared to paper, woven polypropylene, and cotton/canvas bags that he claimed have a higher carbon footprint than traditional plastic bags.

Laura Figueroa, postdoctoral fellow at the University of Massachusetts Amherst, said factors in addition to carbon must be considered. “What about malnourished sea turtles that eat plastic bags resembling edible jellyfish or shore birds that choke on plastic bottle caps? We must think beyond just carbon and account for the numerous insidious impacts that plastics have on biodiversity and people.”

Traveler postscript: National seashores, Great Lake park units, and parks in Alaska that touch the Pacific are not the only areas of concern in the National Park System when it comes to plastics pollution. A 2020 study determined that more than 2 million pounds of microplastics, the equivalent of 123 million plastic bottles, settles on national parks and other public lands in the West each year. The Oceanic Society has seven recommendations for reducing plastic waste. You can find them here.