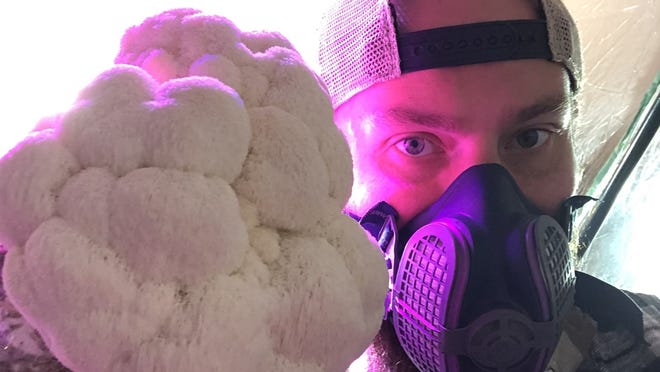 Both mushrooms and locally grown ingredients are experiencing an upswing in popularity, growers say. So it’s not surprising that local mushroom growers are increasing their output by growing fungi indoors.

“We have seen an increased interest in mushrooms from the culinary, and even fashion, standpoints. Plant-based, local, and nutritional options have become more and more popular,” according to Charles “Chip” Foote, founder of Flush with Mush, located on Milwaukee’s east side.

That’s Flush, as in a crop of mushrooms or a state of being amply supplied, Foote said.

Flush with Mush isn’t the only local operation with an eye on indoor mushroom growing. Crops on Top, an urban farm in Riverwest that sells fresh produce to chefs and consumers, has experimented with indoor mushroom crops and is planning to add more mushrooms to future production efforts, according to Joel Lichosik, who owns the farm with his wife, Jamie.

In Janesville, Misty Dawn Farm Mushrooms has been in operation since 2014, growing mushrooms on logs in the forest.

Mushrooms’ popularity in cooking is not surprising. They are low in calories, high in fiber and a good source of vitamins, minerals, amino acids and antioxidants. Their meat-like texture and savory flavor has long made them a popular choice for those who are cutting down or eliminating meat from their diets.

“With COVID more people are cooking at home and thinking about their health,” Foote said by email. “It has also given people the time to look into alternative and more interesting food options outside of what you would typically find at the grocery store.”

Flush With Mush grows both inside and out.

“There are different challenges growing in both environments. Growing outdoors you have to deal with nature; specifically fluctuating weather and wildlife. Indoors it is more difficult to maintain a sterile environment and regulate temperature and humidity,” Foote said.

Flush with Mush’s fruiting chamber is an 8-by-8-foot room with fresh air access that is humidity-, temperature- and light-controlled to provide optimal conditions for the mushrooms.

“Every little thing can affect how the mushrooms grow. Lighting, temperature, and humidity are the biggest things that affect them. More fresh air, for example, leads to bigger oyster mushroom caps and smaller, shorter stems,” Foote said. “Different amounts of light will affect their color.”

Research and trial and error are the keys to Flush’s success, especially since each variety is different, Foote said. For example, pink oysters are tropical and love heat and humidity. Many other varieties couldn’t take that.

“I primarily grow indoors in specific mushroom grow-bags,” Foote said. “They help keep the substrate sterile while the mycelium colonizes it. …”

Flush produces 30 to 40 pounds a week currently, but will be doing more once market season starts. The “harvest season” is year round, at least for what is produced indoors.

“(The outdoor crops) have more of a summer and fall harvest here in Wisconsin,” Foote said. “I grow primarily indoors, but we do log inoculations, make beds and fruit some bags outside in the summer.”

A log inoculation is essentially imitating nature with the root structure of the mushrooms.

The logs are cut fresh, aged a few weeks, and then implanted with wooden dowels that have been covered in mycelium. The plugs then need to be waxed over to protect them from contamination and to keep moisture in.

“Depending on the strain and the wood, these can take up to two years before you see a flush,” he said.

In praise of mushrooms

One benefit of mushrooms is the almost-instant gratification. Foote says he loves watching them grow.

“It is a joy to look at the progress even overnight! “

Flush with Mush’s current best sellers are pink oysters in the summer and lion’s mane in the winter.

“Lion’s mane is my favorite. Noelle’s (Noelle Parker runs the business with Foote and does the marketing) favorites are chestnuts and lion’s mane. Chestnuts have a nice snappy texture when cooked, and lion’s mane have medicinal properties along with beautiful tendrils.

Noelle also enjoys reishis, as she makes homemade tinctures and teas out of them. Reishi have been used across the world for their medicinal properties for centuries.”

While Foote‘s focus primarily is on growing, Parker handles other components like marketing and licensing — although she dabbles in growing, too. “We both work together, and that’s one of the keys to our success,” Foote said.

Over the past year Flush with Mush been also been carrying merchandise from Snip Stitch and Patch, a company founded by friend Carol Ann Waugh, who sells mushroom themed aprons, masks and pouches.

“They all sold very well. We’ve also been seeing a lot of mushroom-themed attire online and in stores. Our friends send us links to mushroom clothes all the time,” Foote said.

Fungi are more than fashionable, however. Mushrooms are also found to be healthy for the environment. The Mushroom Council released a report in 2017 on the environmental impacts of growing mushrooms.

The study found that a pound of mushrooms requires far less water and energy than most other agricultural crops to produce. It also has a low CO2 emissions rate.

Foote was familiar with the power of the mushroom before he started growing them because, he said, he has been in food service industry his whole life — from bartending, cooking and serving to delivering. But his interests went beyond the kitchen.

“I’ve always had a love for the outdoors. With that came a fascination with the woods and things that grow/live in them. Mushrooms were always one of the most interesting things to me. so I decided to pursue cultivation of them. Noelle is in social work but has also had a love of the outdoors her entire life. It’s been quite the adventure!”

Flush with Mush will be at the Riverwest Gardener’s Market beginning in June . It is also supplying restaurants, such as The Original, Tess, Easy Tyger and The Milwaukee Club.

Flush is also looking for space to expand and planning to add an order form to its website, Foote Said.

Mushrooms take an unusual spin in this rich appetizer with the velvety texture of cheesecake, an earthy flavor from the mushrooms, and a nutty note of Gruyere. The recipe, first published in the Journal Sentinel in 2010, was from the former Café Soeurette in West Bend.

In separate bowl, beat yolks into 3 tablespoons of the sour cream, then stir into dough mixture and knead until well mixed. Wrap in plastic wrap and refrigerate up to 2 hours.

Prepare filling: In skillet or saute pan, saute both kinds of mushrooms in olive oil over medium-high heat until golden, being careful not to crowd them in the pan so they brown evenly. Add ramps and saute until soft. Add garlic, thyme, salt and pepper. Cool.

In bowl, beat cream cheese, mascarpone and remaining 1⁄2 cup sour cream; add whole eggs and egg white. Beat until smooth. Fold in shredded Gruyere and cooled mushroom mixture. Pour into dough-lined pan. Place pan in larger pan and pour hot water into larger pan to come up side of springform pan to within 1⁄2 inch of the top. (Foil will keep water from seeping into pan and top of cheesecake from cracking.) Bake in preheated oven 40 minutes or until set. Cool on wire rack. To remove from pan, loosen edges with knife, then release springform. Keep refrigerated.

Here’s a recipe from foodandwine.com for an elegant salad of lightly sautéed oyster mushrooms and arugula, topped with thin slices of prosciutto and Pecorino Toscano cheese. This recipe was first published in the Journal Sentinel in 2010.

In a large nonstick skillet, heat 2 tablespoons of the olive oil. Add mushrooms and season with salt and pepper. Cook over medium-high heat, stirring occasionally, until tender and lightly browned, about 6 minutes. Transfer to a bowl and let cool.