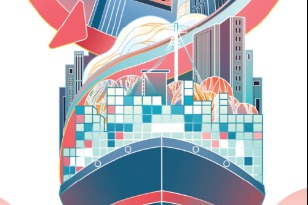 The first decade of the 21st century saw Western economies take the world to the brink of economic collapse. China”s economic management enabled the West to recover from its self-inflicted injuries. Despite this, some commentators cling to the idea that China cannot escape the middle-income trap in which countries are unable to reach advanced economic status.

China’s policy initiatives clearly show an awareness of the challenge and provide structural solutions for escaping this “trap”.

The structural challenge is a move from growth based on cheap labor and cheap capital to growth based on high productivity and innovation. Strategic change requires new processes and finding new markets to maintain export growth.

A key focus is increasing domestic demand, so the expanding middle-income group can use its purchasing power to buy high-quality, innovative products to help drive growth. Development rests on investment in physical and digital infrastructure. It encourages creativity to support breakthroughs in science and technology, so these can be applied to expand the economy.

Many economies guided by Adam Smith’s principle of an “invisible hand” have found it difficult to break free of the middle-income trap. China’s economic policy approach is more considered and the 2022 Government Work Report clearly explained the structure and focus of measures being taken to avoid the middle-income trap.

Encouraging innovation and the rapid adoption of new processes are key structural changes on the development path. China has developed the world’s most advanced digital economy ecosystem. This includes the digitalization of industries and building smart cities to improve economic efficiency and enhance economic management with the use of big data.

China’s progress toward a cashless society is well-established with WePay and Alipay. These digital services are so entrenched in China that it is difficult to appreciate just how revolutionary they are in terms of the structure of the economy.

The focus on these services enables the growth of the digital economy for consumers and suppliers. Such digital services deliver options for those who were previously unable to access bank services, including access to capital. The digital service empowers people by providing easy access to advanced services that use digitally delivered artificial intelligence and blockchain technology.

Now the roadside fruit seller in Dunhuang, a city in Northwest China’s Gansu province, has the same access to digital trade services as the retail store in metropolitan Shanghai; once unthinkable business growth with instant access to a China-wide market is now just a touchscreen away.

These structural developments will be further advanced with the introduction of the digital renminbi. The digital currency will allow the government to collate big data resources to track spending patterns in the economy. The information collected will help improve economic management because these big-data transaction details can be used to fine tune economic policy responses.

These innovations and new processes increase domestic demand by lowering the cost of products and services and by expanding access to new domestic and international market segments. And the structural changes underpin the new dual circulation development paradigm that aims to change the structure and focus of the economy, decreasing the economic reliance on exports and boosting domestic demand. This is being applied in an economy that has already transitioned from being a low-cost labor provider to delivering a more sophisticated and highly paid labor force.

The mandated rises in the minimum wage, most recently in August 2021, enable increased domestic demand that feeds economic expansion. The resulting trickle-up demand results in the purchase of innovatively produced domestic products, many of which further enable engagement with the digital economy.

The widespread ownership of advanced Chinese-designed smartphones encapsulates the way that the domestic demand underpins company expansion and the continued innovation in these products. Additionally, it is these improvements in digital connectivity that open up participation in the digital economy for both consumers and businesses.

The dual circulation development paradigm reduces, but does not eliminate, reliance on export markets. The Belt and Road Initiative is, in part, designed to identify and expand new export markets and so reduce reliance on slow-growing Western markets. China is Africa’s largest trading partner and Africa is a market with room to grow further.

Thousands of Chinese companies are using the renminbi in cross-border transactions with Africa. The application of a Chinese digital currency stops cross-border trade being held hostage to the United States-dominated Society for Worldwide Interbank Financial Telecommunications (SWIFT) currency transfer system.

The Belt and Road Initiative includes a focus on trade infrastructure, including the removal of trade barriers and the standardization of trade regulation. Trade settlement processes are an essential enabler of trade. Soft infrastructure is essential because it deals with payment systems and protocols. This is an essential ecosystem that includes a broader application of blockchain certification for payments.

Countries involved in the Belt and Road Initiative participate in a harmonized set of trade and trade settlement standards that make cross-border trade more efficient and expand export markets in new areas.

The final component of the development path is the structural expansion of China’s capital markets to draw in both domestic and foreign capital. Attracting increasingly sophisticated capital committed to long-term investment initiates structural economic change where financial markets are seen as a store of wealth rather than a short-term profit opportunity. The continuing focus is on the further opening of the capital account, debt markets and the liberalization of investment conditions.

China’s economic trajectory is not accidental. It rests on well-considered analysis and management of the structural economic framework. A coordinated collection of policy initiatives ensures that China remains a major economic force in the global economy. Economic self-reliance sustained by innovation in the digital economy can generate common prosperity that enables an escape from the middle-income trap. This escape brings with it inevitable changes to the geopolitical landscape as the digital economy expands.

The author is an international financial technical analysis expert and a national board member of the Australia China Business Council. The author contributed this article to China Watch, a think tank powered by China Daily. The views do not necessarily reflect those of China Daily.