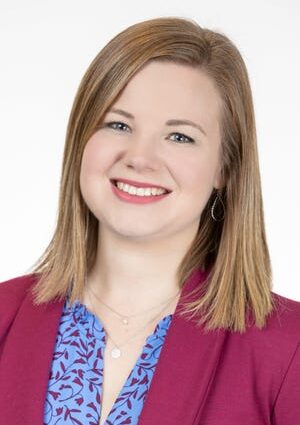 Mailloux, along with 29 other applicants from across the state, was chosen to participate in the pilot program designed to train a cohort of Kansans in facilitating healthy civic engagement.

Among the fellowship’s activities are four day-long intensive workshops held throughout the year.

In her role at Hutchinson Community Foundation, Mailloux regularly designs and facilitates meetings, including gatherings around the entrepreneur ecosystem, the local support system, nonprofit capacity and connections, and internal strategic initiatives and programs.

Recently, she advised on the design of a county-wide resident-engagement process focused on American Rescue Plan Act funding priorities and co-facilitated the Reno County ARPA Task Force, which oversaw the process.

Other recent civic experiences include serving on the Hutchinson Public Art and Design Council, Hutchinson Tree Board and Hutchinson Community Improvement Commission.

Mailloux joined the community foundation in 2013 as program officer.

She is an alumna of several Kansas Leadership Center programs and regularly practices KLC principles. She graduated from Hutchinson Community College, Kansas State University and the University of Kansas.

Hutchinson Community College announced that Jennifer Wiens, Professor of Chemistry, has been selected as the 2021-22 Dragon Educator of the Year.

Wiens was selected from nominees from all academic areas by the HutchCC Student Government Association (SGA) for the honor. Students nominate the instructors, who then complete a selection and personal interview process conducted by SGA.

Wiens received the honor at the college’s May 6 commencement.

Wiens teaches General Chemistry lectures and labs, as well as Ecology of Environmental Problems, along with serving as an academic advisor.

In the role, Baldetti will coordinate with internal and executive team members to set and monitor system-wide goals for all quality initiatives while promoting HRHS’s High-Reliability Journey.

Currently, Baldetti serves as Director of Healthcare Initiatives for McPherson College, and before that was Public Health Director and Health Officer for the Reno County Health Department.

Baldetti is a member of the American College of Healthcare Executives, the American Economic Association, and the Academy of Management.

He and his wife Kylee are the parents of three children; Blayne, Liam, and Lahna.

Griswold has 24 years of nursing experience and is pursuing her education to earn credentials as a Psychiatric Mental Health Nurse Practitioner (PMH NP).

“I have a lot of personal experience with mental health, and it helps me to help others,” Griswold said. “I want to diminish the negative connotation of mental health issues and let people know that, regardless of how bad things seem, they can get better.”

Therapists at The Center and local physicians sometimes refer patients to Griswold but anyone can call for an appointment.

The nurse practitioner sees patients one-on-one while encouraging their support team to participate in treatment. This team may include therapists, family, friends, caregivers, and case managers.

Griswold was raised in a military family and grew up in Germany, Manhattan, Kansas, and Colorado Springs. She is relocating from Newton to Lyons, which is in The Center’s service area.

She earned her associate’s degree in nursing at Manhattan Area Technical College in 2003 and her bachelor’s in nursing at The University of Kansas Medical Center in 2008. Griswold received her Master’s at KU in 2010. Classes for the PMH NP credentials are through Wilkes University in Pennsylvania.

2022-05-14
Previous Post: eSIM Has Entered a New Era. Here’s Why. – IoT Business News
Next Post: The economic importance of biodiversity