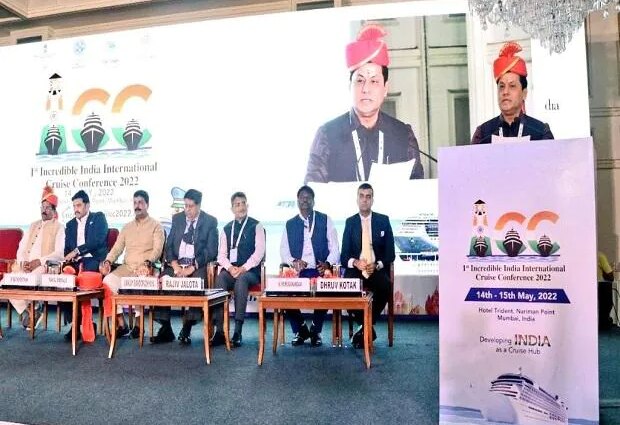 Union Minister Sarbananda Sonowal on Saturday said the government has set up a high-level committee to create an enabling ecosystem for the development of cruise tourism in the country.

Sonowal on Saturday inaugurated the first two-day India International Cruise Conference being organised here by the Ministry of Shipping, Ports and Waterways in association with industry body Ficci.


The Minister for Ports, Shipping and Waterways and his deputy Shripad Naik virtually laid the foundation stone for the third Chemical berth at Pir Pau Jetty and remotely inaugurated Kelshi Lighthouse in the Ratnagiri district of Maharashtra and Dhanushya Kodi Light House in Tamilnadu.


Speaking to the media on the sidelines of the event, the minister said the government aims to make India the most attractive cruise tourism destination and the industry the world’s largest one in the world.


Sonowal also informed that the government has set up a Task Force under the Secretary in the Ministry of Tourism and the Shipping secretary as its vice-chairman.


The high-level committee will assist the Task Force with its ideas and suggestions to the committee, he said.


“I declare the constitution of a High-level committee comprising both government officials and national and international industry players. It will assist the Taskforce and give it ideas and suggestions,” Sonowal told reporters.


Emphasising that the purpose of the international conference is to make India a cruise tourism hub, the minister said the government will provide whatever modern infrastructure is required to attain the objective.


He also expressed hope that the state governments will also play their role in the promotion of the industry, which is seeing demand coming back after being hit during the pandemic.


“India is going to be the most attractive destination of cruise tourism, and there is no doubt about it because whatever potential we have in the coastal areas and inland waterways are now set to be explored. It is still untapped. So, we will explore it with our most modern infrastructure,” Sonowal said.


India aims to increase cruise passenger traffic from 0.4 million at present to 4 million. The economic potential of cruise tourism is expected to go up from USD 110 million to USD 5.5 billion in the years to come, according to an official release.


To boost the cruise tourism industry in the country, the government has taken several initiatives, including infrastructure up-gradation, rationalisation of port fees, removing ousting charges, granting priority berthing to cruise ships, and providing e-visa facilities, among others, the release added.


Upgradation and modernisation are being carried out at seven major ports in the country, including the flagship New International Cruise terminal coming up in Mumbai with a total cost of about Rs 495 crore.


Sonowal asserted that the Indian cruise market has the potential to grow 10 folds over the next decade, driven by rising demand and disposable incomes.


“The government realises this potential and is determined to position India as a global cruise hub with state-of-art infrastructure for both ocean and river cruises,” he said.


The sea cruise terminal, coming up at BPX-Indira Dock, is expected to be commissioned by July 2024. It will have a capacity of handling 200 ships and 1 million passengers per annum. Similar infrastructure up-gradation is taking place in Goa, New Mangalore, Kochi, Chennai, Visakhapatnam and Kolkata.


The minister asked the cruise business fraternity to share their expectations and suggestions during the conference. “We will surely work on the takeaways from the discussions to develop a robust cruise tourism ecosystem in the country.”


“Lighthouse and Island development is also being undertaken to attract coastal tourists while river cruise or inland cruise is another potential component of cruise tourism that could be explored,” he added.


The third berth at Mumbai port will have a capacity of two million metric tonnes per annum and cater to very large gas carriers and tankers up to 72,500 displacement tonnage. It will be equipped with the latest safety standards under OISD norms.


Rajiv Jalota, Chairman, Mumbai Port Authority and Mormugao Port Authority, said the current cruise ecosystem, including the infrastructure and policy environment, is fast-changing and will match the international standards within a reasonable time.


He also invited international cruise lines to prioritise India in their expansion plans.


He also talked about new possibilities in the cruise tourism circuit.


The Indian cruise tourism market has the potential to grow ten times over the next decade, given the rising disposable incomes, he said, adding “Heritage, Ayurvedic and medical tourism, pilgrimage tourism and the Northeast circuit happen to link cruise, river, and coastal altogether”.

(Only the headline and picture of this report may have been reworked by the Business Standard staff; the rest of the content is auto-generated from a syndicated feed.)

2022-05-14
Previous Post: Pathways Towards Sustainable Food Systems in Times of Crises
Next Post: Can we create a moral metaverse? | The metaverse