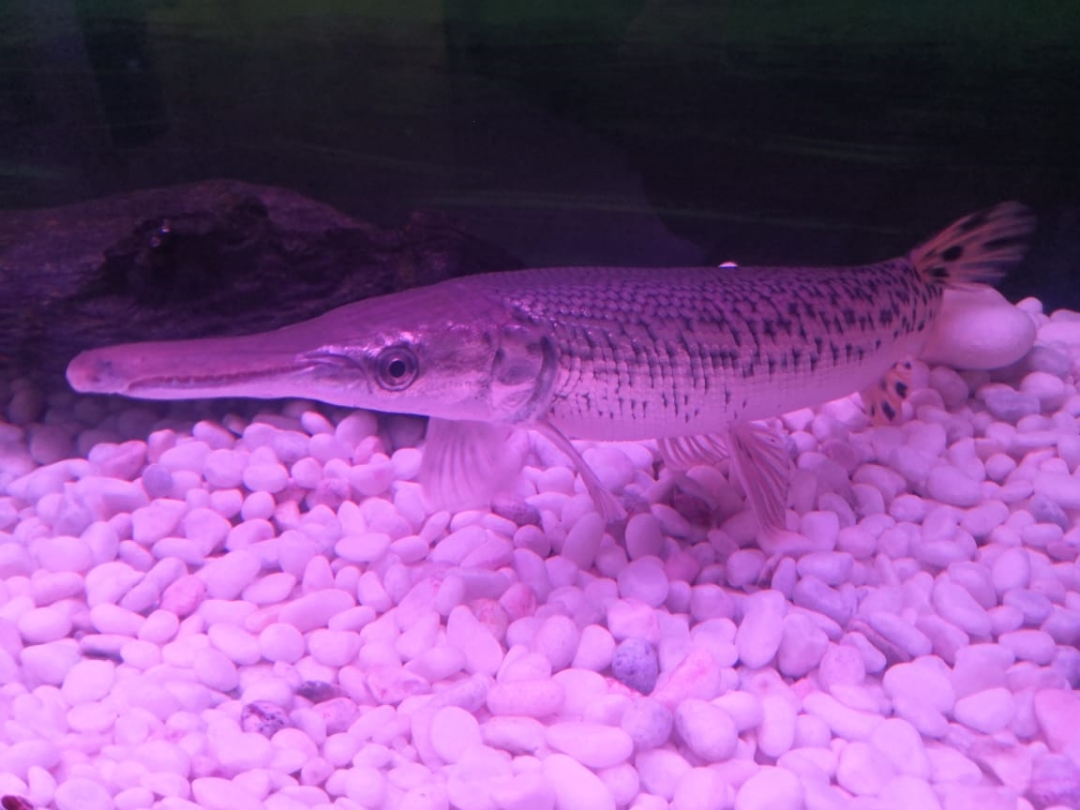 A Florida gar enjoying the water inside a ‘cycled’ aquarium, which is ideal for its health and longevity.

OFTEN I would come across some friends whining about how the pet fish that they had bought ‘mysteriously’ died a week or so after bringing it home.

A common thing that these new hobbyists would claim after conducting the ‘funeral’ for the fish was that they had done what they deemed as the proper way – feeding the fish well, and also using the right filter and stone bubbler to increase the oxygen level in the water.

The most likely scenario, though, was them overlooking the need to run the ‘nitrogen cycle’ before putting the fish in the aquarium.

To do this, one should first prepare an ‘established’ or ‘cycled’ aquarium, regardless of its size.

A nitrogen cycle for an aquarium should be run in five to six weeks prior to housing any fish in it.

Only a fully-cycled aquarium would be able to provide the fish with the appropriate water parameters and also help improve its longevity.

What is a nitrogen cycle?

In a functioning nitrogen cycle, colonies of bacteria would build up naturally during the process, and they would convert ammonia into nitrites, and then into nitrates.

Ammonia and nitrites are fatal to a fish even in low concentration, while nitrates are less toxic – however, a high-level reading of nitrate is an indicator of the time when a partial water change is needed.

Ammonia is ever present in any aquarium – it is derived from uneaten feed and other organic matter including waste from the fish.

High-level absorption of this nitrogen-hydrogen compound would make it very difficult for the fish to eliminate it from its body and over time, the accumulation could cause the fish to become severely ill, and also suffer considerable damage to its skin and scales, and other internal organs.

This, eventually, would lead to its death. 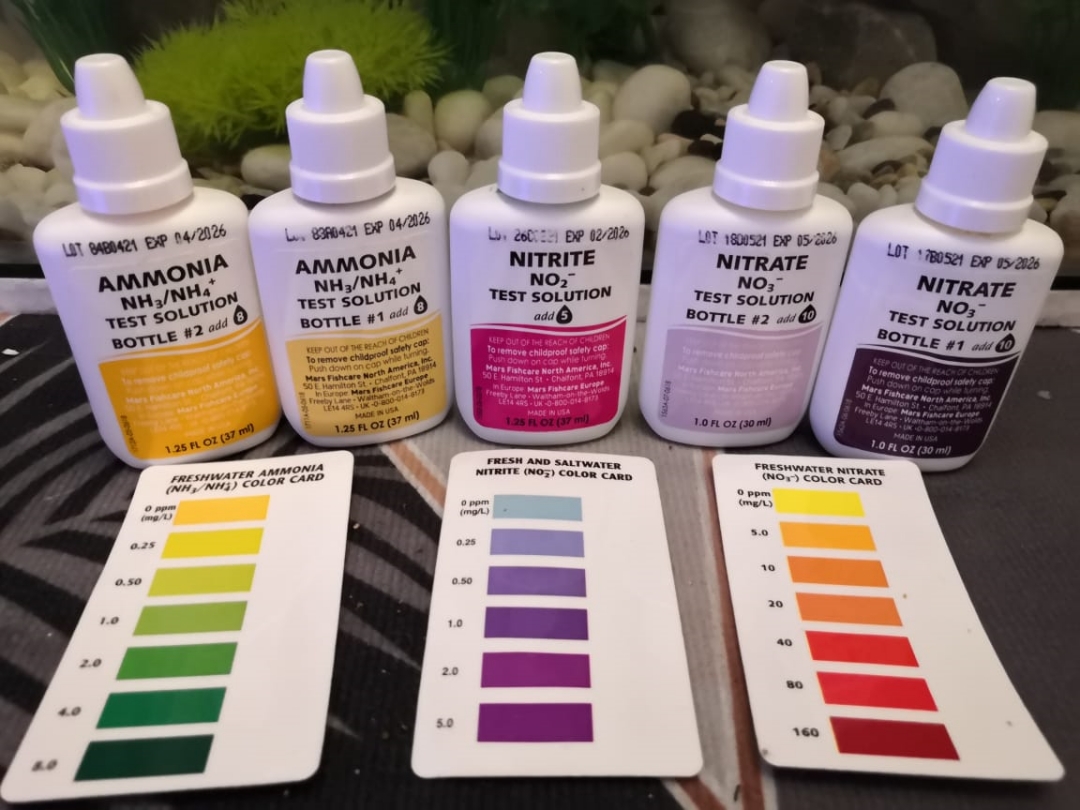 The API freshwater test-kits that are vital during the whole cycling process.

Typically a large body of water, in a natural environment, is able to dilute ammonia and keep it to a level that would not harm any living organism in it, including the plants, in any way.

However, the enclosed setting within an aquarium is a whole different scenario.

To check the parameters of water, a pet owner should buy test kits – either for freshwater or saltwater, depending on the types of fish – that are easily available at most fish shops.

These test kits serve to check the levels of ammonia, nitrites and nitrates in the water during the cycling period.

Each kit has its own instructions; for the ‘API’ testing, the only safe level for ammonia in an aquarium is 0 part per million (ppm) as even a concentration of just 2ppm could be fatal for the fish.

For nitrates, a reading of between 10 ppm and 40 ppm is generally a safe level for fish – anything greater than 80 ppm is toxic.

A way to achieve lower volume of nitrates and reduce the frequency of water change is to add in some ammonia-removing plants into the aquarium, and one good plant is the very accessible ‘pothos’ (the ‘Devil’s Ivy’, or epipremnum aureum).

These plants would pull the nitrates from the water for nutrition – a win-win situation as this would boost their own growth and at the same time, reduce the nitrate level in the water.

Another method is setting a deep sand-bed (about 15cm) inside the aquarium, which promotes the cultivation of the anaerobic bacteria in the bottom layers, which would convert the nitrates to nitrogen gas.

This ‘old-school way’, however, can burn a large hole in the pocket – it is not cheap to acquire at least 130kg of aquarium-specified sand to achieve the minimum bed depth for an aquarium measuring 120cm by 45cm by 45cm. 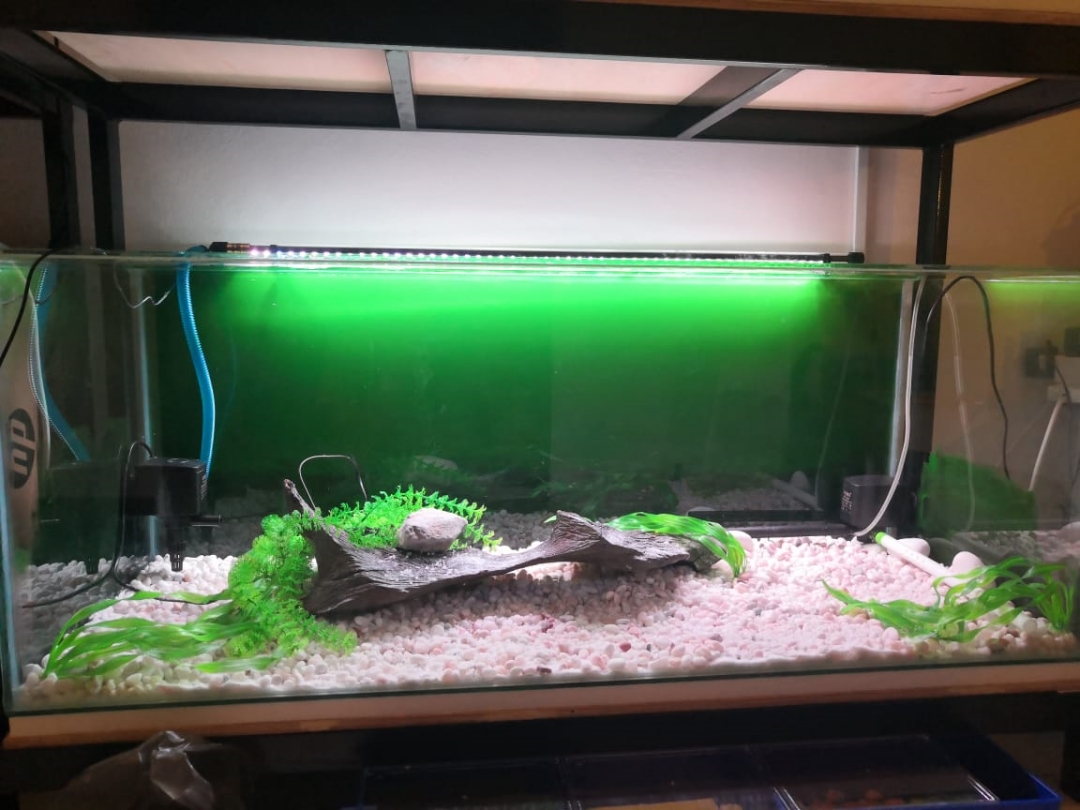 It is crucial to set the aquarium with the proper filtration and substrates before filling it up with water to start the cycling process.

One should decide to either use a ‘fishless cycling method’, or a ‘fish-in cycling method’ – the latter would involve the fish being exposed to high concentration of ammonia and nitrites throughout the process.

For me personally, I would do the ‘fishless method’, which produces a similar outcome as that of the ‘fish-in method’.

The first step is to set up the aquarium with the correctly-sized filtration system, gravel and air-pump.

After filling the aquarium with tapwater, get it treated using the conditioner of your choice so as to get rid of any chlorine and chloramine content.

Next, add natural fish food – it can be a slice of fish or a sliver of prawn. It would take about a day for this organic matter to decay and turn into ammonia.

After that, we wait for day or two; the first nitrifying bacteria would start to colonise inside the aquarium and as they grow in numbers, they begin to turn ammonia into nitrites.

This would continue on for a few weeks. Dosing the aquarium periodically with fish food is also essential during this period to ‘feed’ the beneficial bacteria.

From this point, another waiting game begins as it would takes a few weeks – and obviously, a high level of patience – for the nitrites to be converted into nitrates by the ‘nitrobacter’.

Tests should be conducted after three to four weeks to check the levels of nitrites and nitrates in the water.

It is actually normal to read certain spikes in ammonia level during the initial stage of the cycling process; as the level of nitrites is rising, the level of ammonia should go down.

Give it around five or six weeks, and the water in the aquarium should read an ammonia level of zero ppm, a nitrite level of also zero ppm and a nitrate level of above 20 ppm.

Once this is achieved, a water change can be carried out and the fish can be housed in the ‘newly-established’ aquarium. 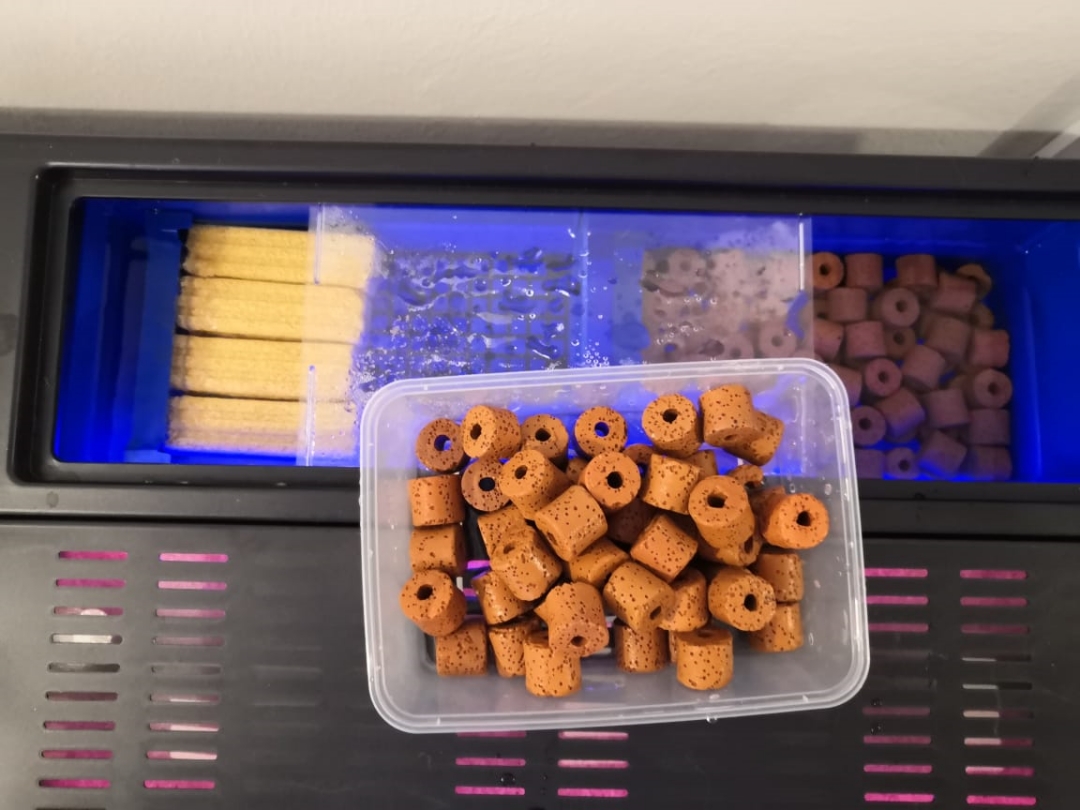 The filter media that have been taken out of an established aquarium to be used to speed up the cycling process.

It is not surprising that there are hobbyist who just cannot wait for six weeks; thus, there are hacks for them, one of the most popular is to transfer or use parts of the filter media or gravel that is already present in an ‘established’ aquarium into the new aquarium.

Commonly made from plastic or clay, a filter medium provides the beneficial bacteria plenty of surface for them to thrive.

By using the media from an established aquarium, it gives a headstart for the bacteria to begin their colonisation and kick off the nitrogen cycle almost immediately inside the new aquarium.

The timeline for this cycling process depends of the quantity of the media – it can go from a few days to about one week.

Another method is to take the ‘dirty’ sponge filter or filter floss from an ‘established’ aquarium, and rinse it inside a container of the aquarium water. 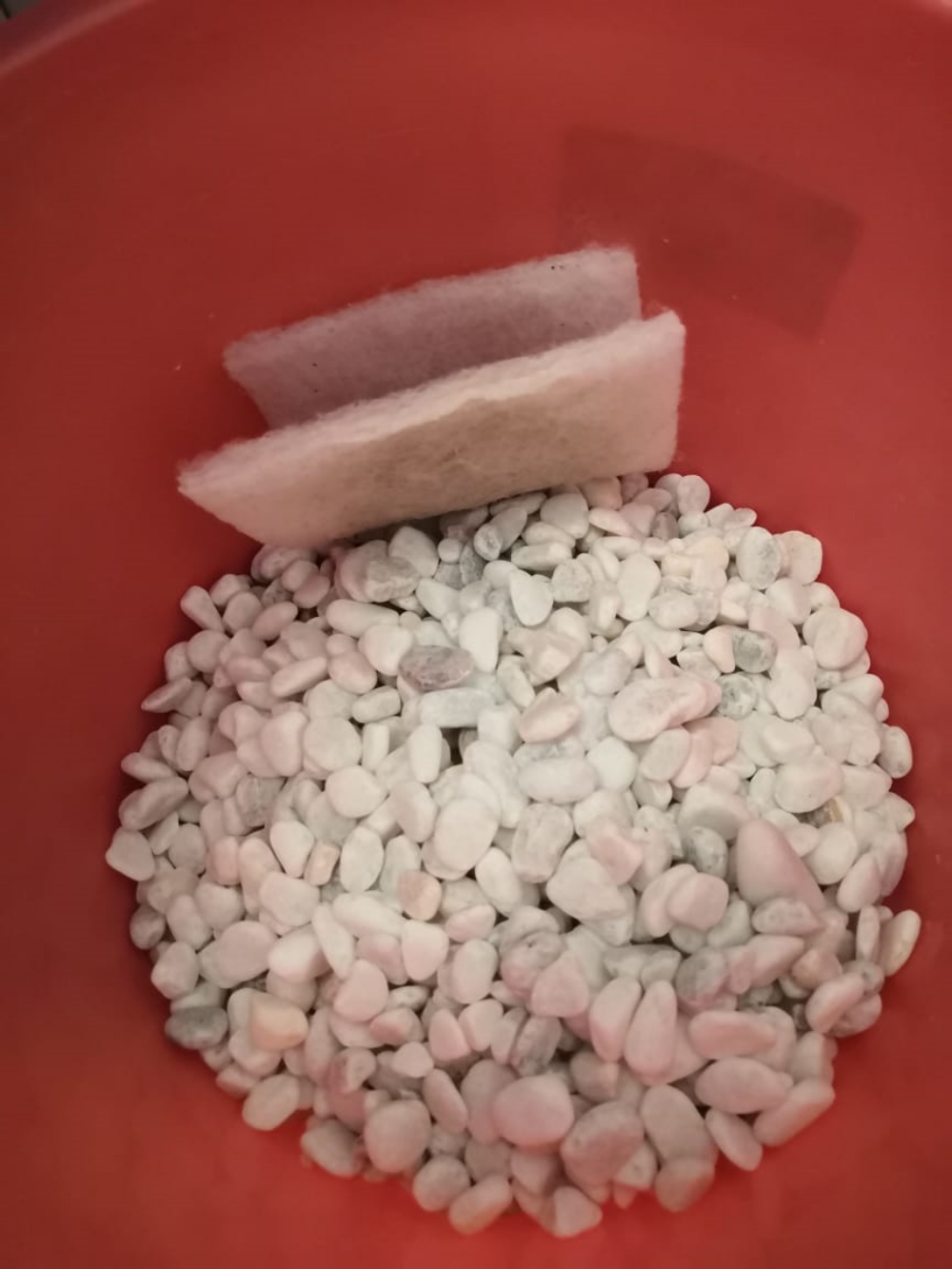 The substrates from an established aquarium can also be used to speed up the cycling process as it contains high concentration of beneficial bacteria on its surface.

The usage of the existing aquarium water is very important, as the regular tapwater contains chlorine, which can kill the beneficial bacteria instantly.

The murky water that comes out from the rinsing of the filter is then added into the water inside the new aquarium.

The downside of this method is that having murky water in a new aquarium is not visually pleasing, at least for a few days.

After that, the water should become clear and the aquarium should be sufficiently ‘established’ and safe for your pet fish.