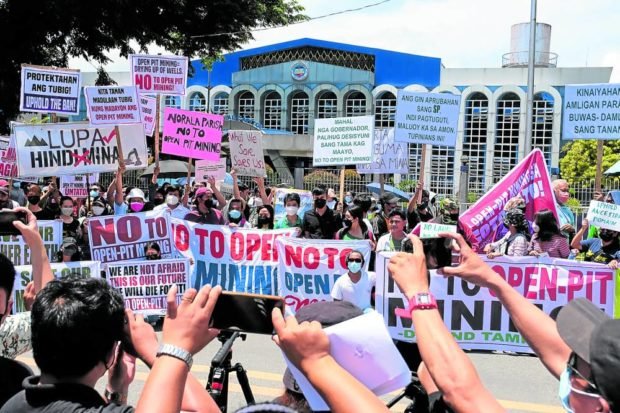 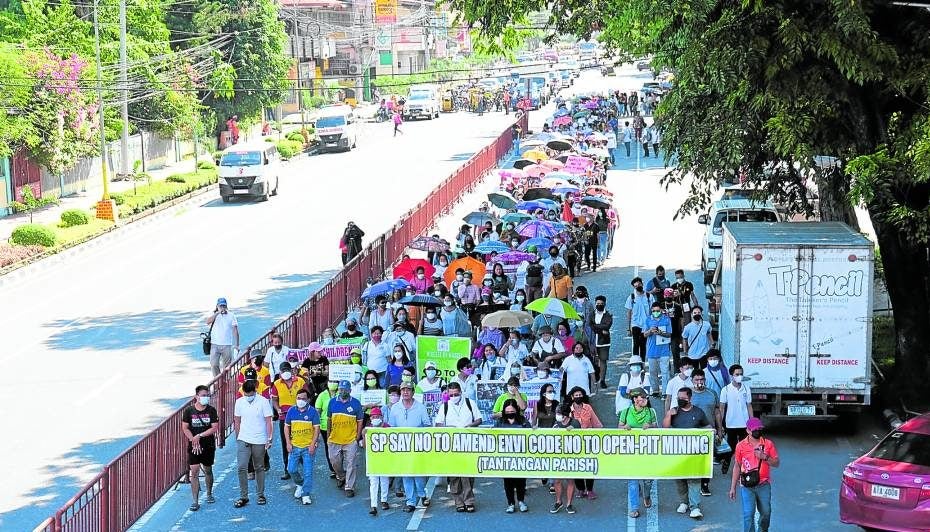 SOLIDARITY MARCH Members of religious and antimining groups join a solidarity march in Koronadal City on Thursday to protest the lifting of the ban on open-pit mining in South Cotabato. —BONG S. SARMIENTO

KORONADAL CITY — Outraged by the lifting of the open-pit mining ban which had been in effect in South Cotabato province in the last 12 years, about 3,000 residents in this city and surrounding towns trooped to the provincial capitol here on Thursday calling on the provincial governor to veto the measure.

South Cotabato Gov. Reynaldo Tamayo Jr. faced the crowd, which included the elderly and youth groups, and announced the creation of a technical working group (TWG) to study the recent decision of the provincial board to amend the province’s environment code.

“Today, we will create a TWG that will study the amendments made by the Sangguniang Panlalawigan to our environment code,” Tamayo told the crowd gathered outside the provincial capitol following a closed-door meeting with a team headed by Marbel Bishop Cerilo Casicas.

As of Thursday noon, Tamayo said his office had yet to receive an official copy of the amended environment code, which he could either veto or allow to lapse into law by not signing it 15 days after receipt.

He said he would base his decision on the recommendations of the TWG, taking into account “what is right and [what is] for the greater welfare of the people.” 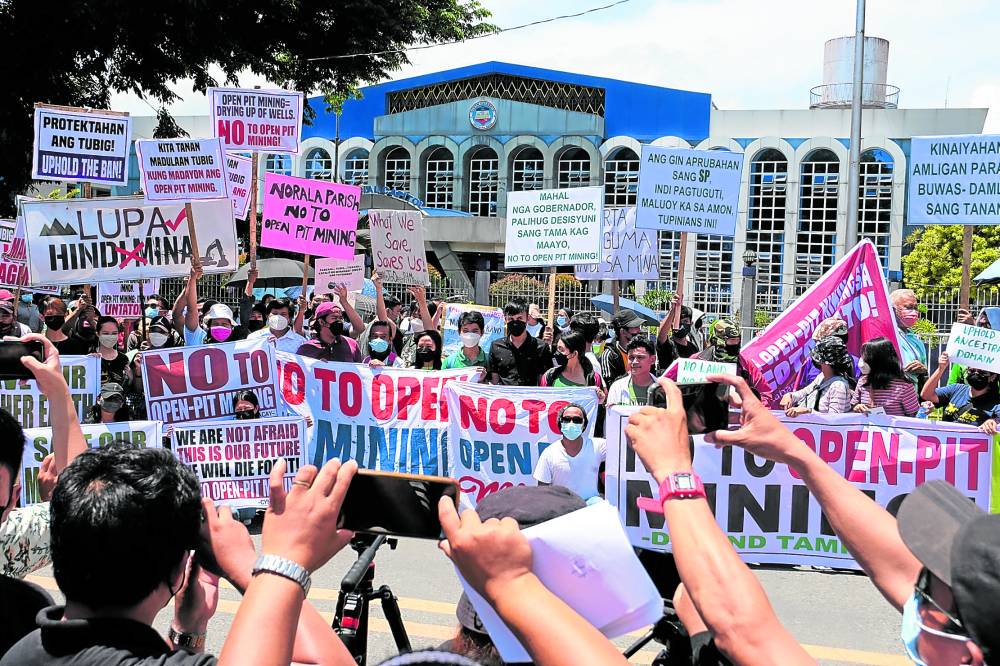 CONCERNS Antimining advocates gather outside the South Cotabato provincial capitol in Koronadal City to voice their concerns about the impact of mining activities on the province’s water supply and natural environment. —BONG S. SARMIENTO

‘Voice of the people’

The governor also said that before he would make a decision, he would discuss the recommendations of the TWG with both the anti- and promining groups. Casicas said they welcomed the decision of Tamayo to create a TWG, adding that “the governor showed sincerity during their meeting.”

“But in the end, we hope he will decide based on the wisdom of the people … The most powerful voice is not of the governor’s but the voice of the people,” the prelate said at a press conference.

Casicas said Tamayo informed them during the meeting that the amended environment code had already reached his office but the Sangguniang Panlalawigan recalled it “for some reasons.”

Lawyer Noel Ben, director for legal aid and community extension services of Notre Dame of Marbel University, said the amendment to the environment code would not be final until the governor acted on it within the prescribed period, or 15 days from his office’s receipt of the measure.

“The passage of the amended environment code is still at their (Sangguniang Panlalawigan) level,” according to Ben, who is helping the Diocese of Marbel in legal matters.

Casicas said they were hoping that with the outrage expressed by different sectors, the provincial board would nos longer transmit a copy of the controversial measure to the Office of the Governor.

Board Member Hilario de Pedro VI, the main author of the proposal to lift the ban on open-pit mining in the province, appeared unmoved by the public backlash generated by the board’s decision.

“You have expressed your suspicions, outrage, dismay and outright condemnation of our decision as a collegial body. You are entitled to that and you are also entitled to know the real reasons,” he said in a post on Facebook, which generated mostly negative comments.

De Pedro claimed that the environment code violated the 1987 Constitution.

In 2020, however, Judge Vicente Peña, acting presiding judge of Regional Trial Court 11th Judicial Region Branch 24 here, said in a 31-page decision that the code’s Section 22 (b), which bans open-pit mining in South Cotabato, was legal and consistent with Department Administrative Order No. 2017-10, the Local Government Code of the Philippines and the Constitution.

The late former Environment Secretary Gina Lopez issued DAO 2017-10 which banned the open-pit method of mining for copper, gold, silver, and complex ores in the country.

But the Department of Environment and Natural Resources (DENR) has vowed to implement a strict monitoring of the Tampakan copper-gold project on its environmental protection and rehabilitation commitments once it resumes operations.

“The environment will not be sacrificed. We will see to it that the soon-to-commence Tampakan copper-gold project will be strictly monitored in compliance with applicable mining and environmental laws, rules, and regulations,” said Acting Environment Secretary Jim Sampulna in a statement.

He said SMI would be required “to invest in equipment and manpower to ensure mitigation in case of any adverse impacts from the mining operation.”

The MGB will create a multipartite monitoring team that will oversee the conduct of quarterly environmental monitoring and audit of the mining company’s operations to ensure that it is within environmental laws, the DENR said.

It will also convene the Mine Rehabilitation Fund Committee to supervise the management and utilization of the funds for SMI’s environmental protection and enhancement program, progressive rehabilitation, and social development through livelihood activities for residents living close to the project area.

The DENR said the committee would likely be composed of officials and personnel from the DENR and its regional bureaus, community representatives, civic and nongovernment organizations, local governments, and the contractor or permit holder.

Earlier, Chamber of Mines of the Philippines said the decision of the South Cotabato provincial board to lift the open-pit mining ban would help revitalize the mining industry and help in the country’s economic recovery more than two years after the coronavirus pandemic disrupted economic activities around the world. —WITH A REPORT FROM FRANCES MANGOSING