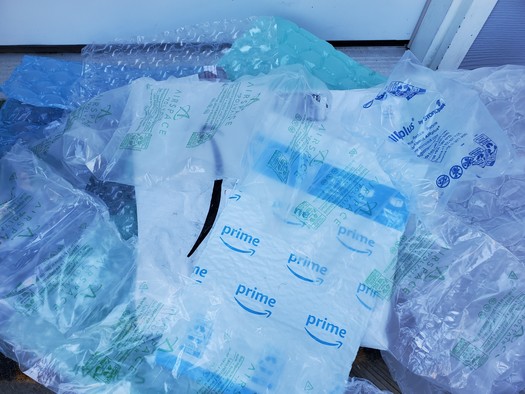 The California State Assembly is expected to vote this week on a bill that would phase out some of the plastics used in online shipping because they clog up landfills and harm marine life.

Ashley Blacow-Draeger, Pacific policy and communications manager for the nonprofit conservation group Oceana, said most of these items never get recycled.

“The majority of that is landfilled and makes its way into the environment where it harms marine life,” she said, “and it also interferes with the ability to recycle, as it contaminates recycling, it gums up the machines.”

Friday is the deadline to pass any and all bills out of the Assembly. Opponents have said manufacturers would have to spend money to switch over to new packaging types, which could result in higher prices for consumers. Supporters have noted that Amazon already has moved to eliminate plastic packaging in India and has announced plans to do so in Germany.

Blacow-Draeger said a huge amount of plastic ends up in the ocean, where it can lead marine life to suffocate or starve.

“They can choke on the plastic pieces when ingested, or it can create a false sense of feeling full,” she said. “And so, they feel like they’ve been eating their natural food in the ocean – but in fact, their stomachs are being filled with plastic pieces.”

The bill would make exceptions for plastics used in shipping certain medicines, medical devices and some types of food.

This Earth Day, Americans will be reminded of the need to take steps to protect the environment.

Wind turbines are a leading clean-energy source, and the industry is looking inward to eliminate its own waste. Drive around states like Iowa, and you’re bound to see rows of wind turbines hard at work. But when those spinning blades are taken out of commission, they’re often sent to landfills.

To minimize waste, technology is surfacing to give these items new life, at a wind farm or in other products.

Taylor Curtis, regulatory and policy analyst for the National Renewable Energy Laboratory (N-REL), said it comes at a crucial time for the industry.

“Over the last few decades, we’ve put [out] a tremendous amount of wind systems connected to the grid,” Curtis pointed out. “But they are legacy systems and there is a projection of having a pretty large amount of materials reaching ends of life by 2050.”

A 2017 study estimated there will be 43 million metric tons of global blade waste more than two decades from now.

N-REL recently demonstrated the feasibility of technology for blade recycling, with a thermoplastic resin which can be melted down and reused.

Curtis acknowledged a key challenge is motiving others in the industry to forgo blade disposal, which right now is viewed as the easier approach.

Grady Howell, project manager for Vestas Blades, which has been involved with bringing similar technology to the market, said the movement is not just about getting material from old blades back into circulation. He emphasized it can be put to use elsewhere, like cement.

“What you do is you take this blade, you break it down, you put it into the cement coat-processing process,” Howell outlined. “They get the fuel out of it to fire their kiln, and they also do get some of that glass that ends up then in the concrete. And you actually kind-of end up with a fiber-reinforced cement.”

Companies like Vestas admitted those producing the technology still have a lot of work to do to build up capacity and make it more commercially viable.

Curtis added policymakers can help by supporting more research and accessibility for the products.

“Right now is a great opportunity to get ahead of what could be a potential waste concern,” Curtis concluded.

Montgomery County has installed its first-ever “litter trap,” which will capture trash and debris and prevent it from flowing downstream into the Anacostia River and eventually Chesapeake Bay.

Located in the Lockridge Drive Tributary, the floating trap is anchored to the banks and uses the stream current to guide the debris into it.

Ryan Zerbe, watershed outreach planner for the Montgomery County Department of Environmental Protection, said the litter trap is one way to keep Maryland waterways free of trash pollution. Plastic bottles make up 60% of all the trash found in other traps in the Anacostia River.

“Any litter in our streams ends up going into our drinking water,” Zerbe pointed out. “And water treatment plants can only treat so many things. Unfortunately, until we change our behavior, we’ll need tools like trash traps to keep our streams clean, and the more we eliminate litter, the better.”

The project is in collaboration with Anacostia Riverkeeper, the Montgomery County Department of Environmental Protection and the Chesapeake Bay Trust. The trap is the eighth of its kind installed in the Anacostia River Watershed.

Jeffrey Popp, senior program officer at the Chesapeake Bay Trust, said in addition to the installation, the project also focuses on behavioral change to prevent people from littering in the first place.

“This project is right in a neighborhood,” Popp explained. “Everybody who walks past it understands what it is. It has a sign on it that explains what it is and what it does, and so the goal here is that people will again see the amount of trash, especially after a rainstorm, and understand that this is a problem that is easily fixed.”

As part of the grant, the Montgomery County Conservation Corps will go out once a week and sift through the trash, divide it into different categories, weigh it, and then share the data with the county. The trash trap project was funded through the Montgomery County Watershed Restoration and Outreach Grant Program, a partnership between the county and the Chesapeake Bay Trust.

SACRAMENTO, Calif. — Conservation groups are calling for passage of a bill to phase out single-use plastics.

The Break Free From Plastic Pollution Act would hold companies accountable for the full life cycle of their products and packaging and expand reuse and refill programs.

Heidi Harmon, mayor of San Luis Obispo and co-chair of the California chapter of Elected Officials to Protect America, said less than 10% of plastic has ever been recycled. Most of it goes from our recycling bins to the incinerator, the landfill and ultimately the oceans.

“The industry conned us into believing that plastics were being recycled,” Harmon asserted. “And as a result, since 2005 our plastic waste has doubled. At this rate, there will be more plastic in the ocean than fish, by weight, by 2050, which is crazy.”

Opponents of the bill argued it puts too big a burden on industry and could cause prices to rise. According to the 5 Gyres Institute, nearly two-thirds of plastic becomes waste and by 2050 global production is projected to triple, accounting for 20% of oil consumption. American companies ExxonMobil and Dow are the two largest plastic producers in the world.

“We can overhaul how we design, manufacture, distribute our products, transitioning from single-use and toxic chemicals to a circular economy, a sustainable economy that creates new business opportunities and more jobs,” Levine contended.

There are health implications as well. Last year, for the first time, researchers in Italy found microplastics in the placentas of unborn babies. Bills have been introduced in the House and Senate but have yet to receive a hearing or a vote.

Disclosure: Elected Officials to Protect America contributes to our fund for reporting on Climate Change/Air Quality, Energy Policy, and Public Lands/Wilderness. If you would like to help support news in the public interest, click here.