Rarely in the world of global negotiations do nation states ever quickly reach consensus on a particular issue – but earlier in March at Nairobi this year, heads of state and key representatives at the United Nations Environment Assembly made history by swiftly adopting a resolution setting up the path to a legally binding global treaty to end plastic pollution.

There was a sense of euphoria and elation among those who were there, said Lea Wermelin, Minister of Environment for Denmark – who described it as a moment of the world “putting their faith in policymakers” and why the global community must move swiftly to solve this urgent problem.

She was among the speakers at a dialogue I moderated at the World Economic Forum’s Annual Meeting in Davos last week where the global plastics treaty was in the spotlight and key figures from government, business and society debated what lies in the road ahead.

The global plastics crisis is a man-made scourge. While plastic originated as an innovation to help us preserve food, insulate gadgets, and improve hygiene and public health, it is now so cheap to produce that its ubiquity in everyday life has blighted our ecosystems, generated millions of tonnes of waste, and threatened wildlife.

Earlier this year, scientists discovered tiny plastic particles in humans where they hadn’t been seen before: deep inside the lungs of surgical patients and in the blood of anonymous donors. While the science on the impact of this is still uncertain, there is much cause for concern from the human health perspective.

In recent years, growing awareness and public pressure has been mounting for strong policy intervention on this issue.

The OCED in February issued a report, Global Plastics Outlook: Economic Drivers, Environmental Impacts and Policy Options, which found that plastic waste has doubled in two decades, with most ending up in landfill, incinerated or leaking into the environment. The report also identifies four key areas in urgent need of attention: markets for recycled plastics, technological innovation in plastics, domestic policy measures and international co-operation, including international financing.

The global treaty is a response to this movement and provides a glimmer of hope that international cooperation to curb this problem is possible.

Experts point to the Montreal Protocol — a 1987 global agreement to protect the ozone layer by phasing out ozone-depleting substances — as an example of how global policymakers can intervene to solve an environmental issue, only this time the ambition is greater.

Countries have agreed that the plastics treaty must address sustainability in the ‘full life-cycle’ of polluting materials. This means plastics manufacturing, recycling and waste disposal must become a zero-carbon process. These are not straightforward ambitions, noted Nature in a recent editorial, which argued that is why science and research needs to be at the core of the treaty as negotiations get underway.

Unlike the ozone layer and climate change, one advantage that the plastic pollution crisis possesses is its high visibility. As Gustavo Manrique Miranda, Minister of Environment and Water, Ecuador, puts it bluntly, “you open a fish, you find plastics”.

He shared that even Ecuador’s Galapagos Archipelago, which is one of the most pristine ecosystems in the world, is not exempt from plastic pollution. At least 38 different species in the Galapagos Islands, including turtles, marine iguanas and sea lions, have been recorded entangled by plastic such as bags and lines, having ingested it after mistaking it for food or living in affected habitats.

You open a fish, you find plastics.

Miranda says its situation exemplifies the crisis as “local problems that needs a global solution”.

Ecuador has been leading the way with state intervention. In December 2020, a law restricting the use of single-use plastic products entered into force. The country also launched national strategies to enable a circular economy and has a ‘Law for the Circular Economy’ under approval by its National Assembly.

For the treaty, UNEA is considering two different drafts. Observers note that while one seeks to address plastics pollution worldwide from production to disposal, another focuses more narrowly on oceans and end-of-use.

Consensus seems to be emerging that the global treaty must address the entire life cycle of plastic, not just its end of life. Marco Lambertini, Director General at WWF, which has played a key role in mobilising business action prior to the UNEA meeting, noted that “courageous action” has been taken by governments and companies – but this is clearly not enough, as the problem has gotten worse, he noted at Davos.

This treaty needs to be “fit for purpose”, end plastic pollution, tackle both upstream and downstream aspects of the supply chain, and countries must set clear targets for reduction of the use of plastics.

Businesses are welcoming this intervention and more regulation around the issue, said Laurent Freixe, executive vice president and head of Americas at Nestle. The company was among a group of companies that signed a business manifesto urging UN member states to start on negotiations on the treaty.

This will help level the playing field, as businesses do not want to operate alone, he added. 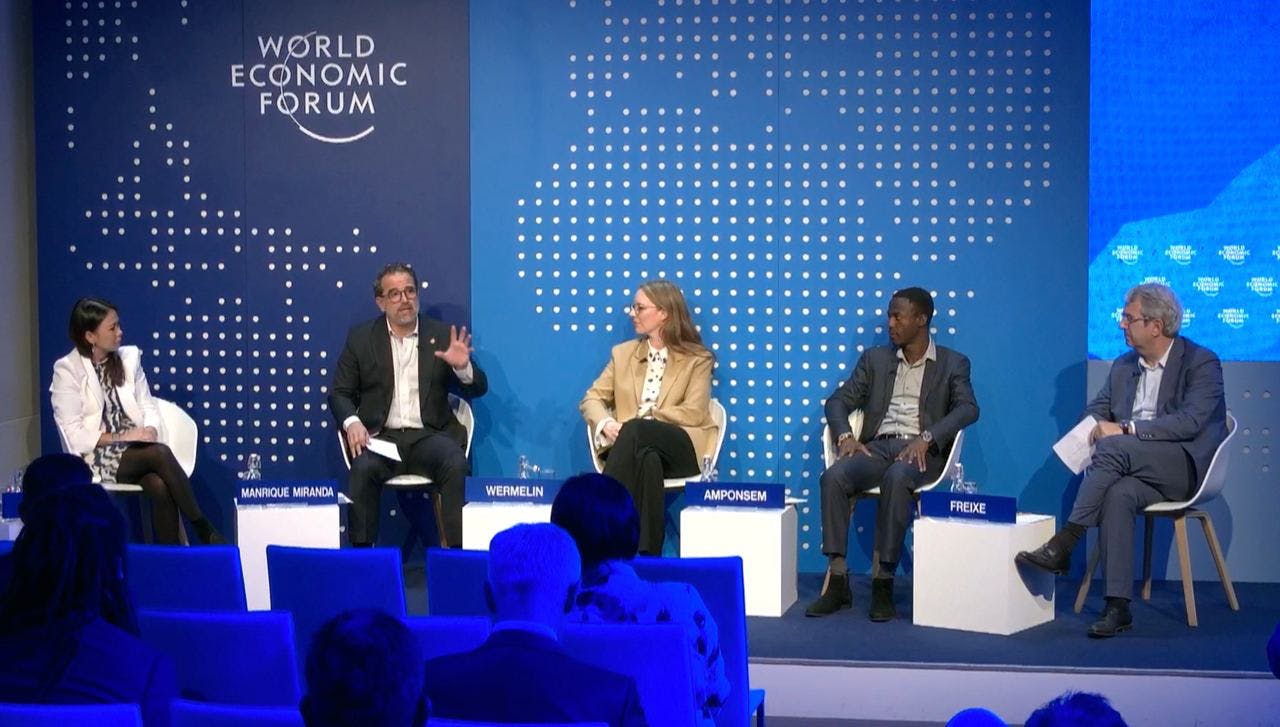 Others such Joshua Anpomsem, founder of the Green Africa Youth Organization in Ghana, noted that the treaty has to be equitable and fair. It should provide for differentiated responsibilities according to countries and the ‘polluters pay’ principle.

Waste colonisation — where rich nations export their waste to developing ones — is also an issue to guard against, he added. Furthermore, about 20 million people are estimated to make a living as waste pickers worldwide. Some questions guiding further actions should include: how do we ensure that livelihoods continue to be enabled and improved, and what is the impact of the treaty on local communities built around the informal waste sector?

Finance also needs to be articulated in the treaty – who pays for what and how much? Too much funding is flowing into producing, and not enough into solutions, noted the speakers at the panel. Financial flows need to be channelled into the right infrastructure and innovations.

Lastly, observers are highlighting that this legally binding treaty must have teeth. How will the targets and legislation be enforced? What incentives and penalties might be meted out?

The global community is watching and there is much work to be done — 2024 is only two years away, a blip of time in the world of negotiations, noted Norway’s Minister of Climate and the Environment Espen Barth Eide, but it is possible. While there remains a key role for polymers in society, what is urgently needed is an end to waste and pollution, he said.

For this treaty to work, it will require speed, standards, scale and solutions. The world has pinned its hope on this treaty, and now is the window of opportunity to get it right.