Nwanyi Rubber: How I rose from mending plastics to become Professor 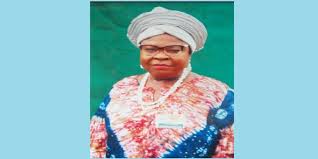 Professor Ifeyinwa Nsude is the immediate past Head of Department (HOD), Mass Communication, Ebonyi State University, Abakaliki. She is the Vice President, Association of Communication Scholars and Professionals of Nigeria (ACSPN), South-east Zone, and a member of UNESCO Scientific Committee on Artificial Intelligence (AI) Bordeaux, France. In this interview with ENE OSHABA, she speaks on her journey to the top coming from a humble background.

You have excelled in your career and achieved your dream of becoming a professor. What was the experience like?

My academic journey is multi-dimensional but I would like to focus on the aspect that addresses the matter of the moment which is Women Economic Empowerment (WEE).

I started my academic journey from Amanamta Primary School in Ohaukwu Local Government Area of Ebonyi State. I was under aged but always insisted to accompany my father who was a school headmaster to school. In order to allow him rest, he took me to school and handed me over to a dedicated female teacher.

Fortunately for me, I picked up academically even when my name was not in the register. Toward the end of the term, I wrote the examination and performed excellently. That was how my academic journey started.

After my primary education, I proceeded to Secondary School in 1967 but was interrupted by the Nigerian Civil war. After the war, I went back to school and that was when my ordeal started. The reason was that my father hadn’t enough money to sponsor my education, but he was determined to train me with his meagre income. I really appreciated his desire to support my education so I mapped out my strategies to ensure that I was educated.

Apart from my school and Sunday uniforms, I had only one dress but each time I remembered the efforts of my parents I felt so happy and thanked God for that wonderful privilege.

I never allowed rich students to influence me. Back then, we were only four girls in secondary school in the entire community so I thank God that I was one of them.

My parents could not buy texts books for me because they had to take care of my siblings with the same meagre income. What I resorted to was to ask my classmates who approached me for tutorial to bring their text books along for the tutorials. After summarising their books, I would teach them and that was what I did in all the subjects.

It really paid off but unfortunately I could not get all my papers in WAEC because our predecessors were involved in examination mal-practice and we were marked down.

I was not discouraged, that was why I decided to gain admission into Teachers Training College (TTC), Enugu, during the time of Universal Primary Education (UPE).

To my greatest amazement I was trained free, fed free (balance diet) and paid allowances for books and up keep. As God would have it, I graduated in flying colours.

I taught for a few years to enable me raise money for GCE O’ level because I wanted to go to higher institution. I later registered for five papers and when the result was released, I made 4As and 1C which enabled me to gain admission into IMT, Enugu.

I had two options: one was to go on study leave without pay and the other was to abandon my admission into Institute of Management and Technology, Enugu and continue teaching in primary school. I chose study leave without pay. That made me to work extraordinarily hard in order to run my programme successfully.

What were your survival strategies?

I started with vegetable garden where I raised different types of vegetables like lettuce, green, pumpkin and waterleaves. The business was booming because I watered it every evening after school and of course it was Jehovah that made it grow.

On Saturdays, I would go to sell the vegetables in the market and I normally make 100 per cent sales because of the freshness of my vegetables.

At a point I invested part of the proceeds from vegetables on poultry that meant expansion of my business. God blessed both my garden and poultry.

At the end of the programme, I was the best graduating student. I told myself that my academic journey had not ended. So, I got admission into UNN where I did my first degree, it was really rough, that was why I resorted to eating once a day (in the afternoon) tagged “0-1-0”. At the end of my programme, I made second class upper division (2:1) which was the best then. Despite the fact that the journey was rough I still had the desire to continue because my target was to be an academic doctor.

I gained admission into UNN to do my Masters and it was at that point that I would have dropped out but Jehovah helped me to continue. In order to ensure that I finished my programme, I had to learn a skill of repairing broken plastics.

So, I was going from house to house (home service) to repair plastics for people. That was when I was nicknamed “Nwanyi Rubber” which means “Rubber Woman”. I was very popular then because of the quality of work I did. The plastics, I worked on then lasted longer than the ones men did so that attracted customers to me.

At the end of the day, I graduated with over four points on a five point scale. I was thankful to God for the journey so far but told myself that I had not reached there. That was why I rejected opportunities I had to be a school principal instead I accepted being a vice principal.

How did you become a lecturer?

So, when Ebonyi State University (EBSU) was established in 1999/2000, I applied for the post of Assistant Lecturer in the Department of Mass Communication. Fortunately I was given appointment. My pay packet was much less than what I was paid in the post primary school system but I did not mind because I had at that point joined my desired profession as a university lecturer. My friends tried to discourage me but I remained undaunted.

In order to develop myself, I attended conferences, workshops, seminars in Mass Communication and related disciplines. I must also point out here that our Vice Chancellor Emeritus, Prof. Francis Idike, and the present V.C, Prof. Chigozie Ogbu, also contributed to my academic growth because they sponsored me to US twice and France for academic conferences. It was after the conference that I was appointed as a member of UNESCO Scientific Committee on Artificial Intelligence (AI) and Social Innovation Bordeaux, France.

When Prof. Ogbu was appointed VC he gave me a commendation letter from the school. I learnt something new in each of the outings. I learnt how to write academic papers and I have continued writing and improving myself until now. My first paper which I presented at ACCE conference in 2001 was a book, 40-page instead of a 15-page paper. I read journal articles, books, newsletters etc in Mass Communication and they have helped me a lot. I also asked my senior colleagues questions in order to learn more.

When EBSU started running Ph.D. programmes, I enrolled. In fact I was among the first set of Ph.D. candidates. I studied extensively and asked questions and at the end my Ph. D thesis was among the few selected for the book of abstract from 2015-2020 to guide post graduate students.

I was sleeping four hours a day which was not good for one’s health but I couldn’t help it because there were many things to read.

Were there peculiar challenges?

I was accreditation Head of Department and we had only the final year class because of non-accreditation status. That posed many challenges for me. The point was that I worked extra-ordinarily hard to secure accreditation for our department because that was the last opportunity for both the lecturers and students. At the same time, I was publishing and attending conferences. It was really tough but I had to forge ahead in order to reach my desired goal.

How did you feel when you finally made it as a Professor?

A friend called me and gave the good news of my promotion; I didn’t quite understand the message until she confirmed what she said. I shouted and jumped up out of excitement. To be sincere, I was highly excited and thanked God and all those that He used to make it possible.

What’s your advice to other women striving to make it to the peak of their careers?

I was able to achieve all these because I placed God first in all I do. He gave me life and the qualities that I needed to attain this great feat of being a Professor.

So, I advise all those battling to come up to be hardworking, honest, dedication to whatever they are doing and should not give up despite challenges because good things are not got on a platter of gold.