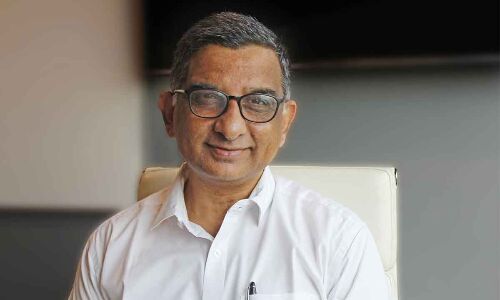 With a mission of enabling and empowering an ecosystem hungry for innovation, Hyderabad-based innovation hub and ecosystem enabler T-Hub (Technology Hub) is creating an impact for startups, corporations, and other innovation ecosystem stakeholders. Incorporated in 2015, it has so far supported over 1,800 national and international startups.

Working in collaboration with innovation partners and enablers in the country and worldwide, T-Hub is building a future-ready innovation ecosystem. In an exclusive interview with Bizz Buzz, its CEO Srinivas Rao Mahankali (MSR) shared his views about the current challenges of the startups, funding slowdown situation and the road ahead for the entrepreneurs.

How is the startup ecosystem expanding in Hyderabad?

Today, Hyderabad is among the top startup hubs of India contributing hugely to the startup ecosystem in the nation. With 3,000 startups and a 329 per cent year-on-year (YoY) increase in deal count as well as the funding amount, this city is becoming the address for new startups in the country.

The State’s robust economy, good infrastructure, strong IT/ITeS, pharma and life sciences industry, presence of a large number of research organisations, availability of a vast talent pool, relatively low real estate price and entrepreneur-friendly policies of the State government has helped Hyderabad emerge as a major hub of startups in a short span of time.

Interestingly, the future of the startup ecosystem in Hyderabad will continue to spawn new trends. All these indicators point to a robust startup ecosystem in the State and an entrepreneurial story that will gain pace in the future. Startups from sectors like software as a service (SaaS) and Internet of things (IoT) are seeing significant traction from the investors.

With a fall in the valuations and investments, how do you foresee the startups raising funds in the future? When do you expect a revival in this scenario?

The macro-environment has hit the funding sentiments of the venture capitalists resulting in fewer investments and lower investment amounts as compared to the previous years. The Indian startups are now facing many challenges, and they are witnessing Black Swan events that Covid-19 had created.

I see the current challenging situation as a passing phase and I believe that there is a lot of correction happening, which would result in the best companies staying afloat. The startups, which have tenacity and resilience, will remain in the business, while the ones that are riding the wave will collapse. The boom is eagerly awaited, and it will certainly arrive in Telangana.

What are the current issues being faced by startups in Telangana? How T-Hub is supporting the startups in passing this phase?

Some of the challenges faced by startups in Telangana are – the need to incentivise capital markets to promote innovation, dependency on imports and greater infrastructural development needs. While the startup world of Hyderabad has dealt with the Covid crisis relatively well, the slowdowns and setbacks it has caused need to be overcome.

The role of ecosystem enablers like us becomes crucial. From supporting startups in their early stages to providing mentoring, guidance, co-working space and also at times some funding, ecosystem enablers are the first port of call for startups. We are playing an instrumental role in building a stronger community of startups and creating a dynamic innovation ecosystem. With a dedicated focus on 6Ms – Market Access, Money, Mentorship, Methodologies, Motivation and ManPower sourcing, T-Hub is empowering the growing startup ecosystem and supporting them in their entrepreneurial journey. Programs like RubriX, FalconX and others are further helping entrepreneurs scale their businesses.

The companies from the edtech sector that have flourished in Covid times are under pressure now. How about such startups in Telangana? Are they looking for more funds to survive in the market?

Many edtech companies, who have made money and attracted a lot of users during the last two years, are witnessing a downfall in users, activity and subscriptions post Covid. In the past two-quarters, schools started reopening and a lot of teachers unlearned what they had learnt. They are more comfortable doing classroom sessions than virtual sessions.

The scenario has changed. We have reached a saturation point this time and thus things seem bleak. Other factors such as capital crunch and unavailability of cheap capital are also there. As capital has become expensive, the situation is troublesome. Inflation, interest rates and war have compelled the investors to look for companies that can produce near-term certainty.

Russia-Ukraine war and the US Fed’s interest rate hike have led to a controlled monetary flow from other countries and a pullback of money flow.

How is the hiring trend among startups in Telangana?

According to a survey, well-funded startups are likely to increase the hiring of mid-to-senior talent by 20-25 per cent in the ongoing quarter when compared to a year-ago period. As per the estimates by tech industry body Nasscom, approximately 4.5 lakh net new jobs were added to the IT sector nationwide. Telangana contributed to a third of net new jobs in the IT sector.

How is the support to the startups from the government and ecosystem enablers?

Telangana government under its State Innovation Policy has set up T-Fund which is a co-investment fund where it will invest alongside established angels, angel networks, and venture capitalists. It had allocated Rs 15 crore in the 2021-22 budget to initiate T-Fund operations. It plans to fund 15-20 startups each year with an average ticket size of Rs 25 lakh to Rs 1 crore.

The government aims to support around 100 startups over five years. As the investor manager of the fund, T-Hub recently disbursed Rs 1.5 crore to three startups. The government recently organised T-Innovation Mahotsavam to support and acknowledge innovations from Telangana. The event facilitated 18 winners including six startups and 12 innovators.

Last year, Atal Innovation Mission (AIM), NITI Aayog had partnered with T-Hub to set up AIC T-Hub Foundation and launched two cohorts focused on healthcare and mobility. Last month, we selected 16 startups for the sustainability cohort of the programme. They will be provided expert-led workshops, specialised mentorship, market access and investor & industry connect.

This month, we have selected 12 Australian startups for the first cohort of the Big LEAP Incubator program in partnership with La Trobe University, Arrow Digital, a digital marketing agency and Investible, an early-stage venture capital firm. These startups will be provided soft landing and enterprising opportunities in the Indian market.

We have recently partnered with the US-based technology accelerator FalconX for the ‘Global Startup Immersion Program’ in Silicon Valley to enable prospective startups across the country to launch their products in the US markets and steer them towards growth and success. T-Hub also signed an MoU with Redberri Earth Foundation under the T-Bridge initiative.

When will the second phase of T-Hub be opened officially? Who will be the chief guest?

We will be launching T-Hub Phase II on June 28. This is the world’s largest incubator with about 3.7 lakh sft of physical space. The State government has invested over Rs 300 crore on this facility. We have not yet received concrete confirmation from the invited person to be the chief guest on the occasion.

2022-06-12
Previous Post: Lessons for private sector funding of conservation in a changing world
Next Post: Transparency reports from tech giants are vague