Is it time to ditch the plastic bottle? 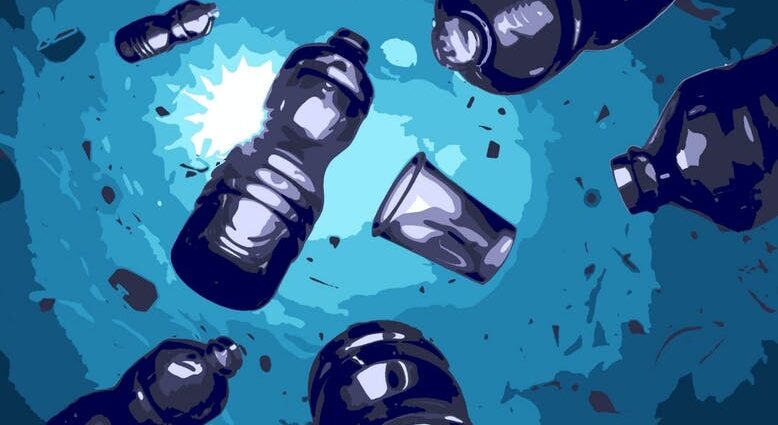 Near the end of this year’s spring semester, I found myself consuming a ridiculous amount of Arizona Iced Tea.

It’s hard to beat–it’s cheap, large, varied in flavor, and an easy choice as part of MSU’s Combo-X-Change program. But the reason I drank so much tea was not really because of any of this. It was mostly because it was one of the only beverages at Sparty’s Cafe that came in an aluminum can. I had recently developed a fresh paranoia of plastic bottles brought on by a National Geographic article about microplastics-and I wasn’t alone.

This spring, after research published in Environment International, detected plastic particles in the blood of 17 out of 22 study participants, social media surged with memes about microplastics, a loosely defined term that is generally used to refer to extremely small plastic particles found in the environment, usually smaller than 5mm. Such memes played on the apparent ubiquity of these particles, commenting on how pollution has seemingly invaded every corner of the planet.

These gloomy memes may represent a change in the way that we think about plastic pollution.

“Traditionally, plastic pollution has been thought of as an ocean problem,” said Eric Freedman, an MSU Professor of Journalism and the director of the Knight Center for Environmental Journalism.

Freedman said that media coverage of plastic pollution has expanded in recent years to include areas less connected to the ocean.

“What the scientific research is showing is that these microparticles are showing up on beaches, in sand dunes, in drinking water drawn from the lakes, in microbrew beers … and that’s the human part of it,” he said.

Research has also discovered increased plastic consumption by fish and the birds and other animals that feed on these fish, Freedman said.

Microplastics may be less visible than the rafts of plastic floating in the Pacific, but they may also feel more personal because of how universal they are. “Microplastics have moved into virtually every crevice on Earth,” according to a National Geographic headline.

If the recent attention paid to microplastics is leading to a change in the way we view the plastic in our lives, it’s possible that common food and beverage containers such as the plastic water bottle will be one of the first targets of discussion. One study tested 259 water bottles across eleven brands and found that 93% of these bottles showed some sign of microplastic contamination. Considerably less contamination was found in glass bottles, indicating that while some contamination comes from the water source, the largest source of contamination may be the packaging.

A study published in Environmental Science and Technology found those who drink their recommended daily intake of water from plastic bottles only, may be ingesting “an additional 90,000 microplastics annually, compared to 4000 microplastics for those who consume only tap water.”

The same study estimated that average male and female adults, assumed to be drinking a combination of tap and bottled water, consume around 114,000 and 94,000 microplastic particles respectively.

Despite all this, there is still much to be discovered about the effects of microplastics on the human body–researchers aren’t sure how they will affect us biologically.

“I think it’s really important to emphasize that this is something that we just don’t know,” said Joseph Zagorski, an Assistant Professor at the Center for Research on Ingredient Safety at MSU. “It’s something that is getting a lot of attention from scientists, press and the public alike … I think it’s really important to go in with as unbiased eyes as we can.”

Zagorski said there are currently too many variables to nail down.

“There needs to be an agreement amongst experts in the field as to what the physical and chemical makeup and size of these particles are going to be … if you have a general consensus among the experts … and they all design their experiments accordingly, then you can get to answers that are a little more easily interpreted,” he said.

Zagorski also said that the previously mentioned study on microplastics in human blood needs further confirmation because of its small sample size.

“Anytime somebody is using human data, and they’re talking to a low number of participants, it’s not that it needs to be discounted, but it needs to be reaffirmed,” he said. “I think it’s really important to stress that just because we can measure something doesn’t mean that it’s a problem … just because we can determine their presence doesn’t necessarily mean that they’re making people sick.”

Due to their usefulness, it’s unlikely that plastic containers are going away any time soon.

“I’m not in the favor of outright going away from the plastic bottles because they are very helpful in reducing the food waste,” said Muhammad Rabnawaz, an assistant professor at the MSU School of Packaging.

He also said that glass or aluminum bottles or cans may leave a greater carbon footprint during the manufacturing process.

“Plastic has good attributes like lower carbon footprint compared to the glass … in my opinion microplastic is one of the most pressing issues at this stage,” Rabnawaz said.

He acknowledged that microplastics should not be found in our blood and indicated more biodegradable packaging as a possible solution, but said there’s a lack of information on toxicity associated with microplastics.

While comparing the environmental impacts of different packaging materials is complicated, it may be true that the manufacturing of plastic is environmentally less impactful than some other materials overall. In the end, using my reusable water bottle probably did myself and the environment more good than filling my body with absurd amounts of mango or raspberry flavored iced tea in an effort to avoid plastic.

However, despite the environmental impacts of manufacturing, water kept in plastic containers is still more likely to be contaminated with microplastics. Additionally, plastic is more likely to litter beaches and waterways.

During the Ocean Conservancy’s 2020 International Coastal Cleanup, plastic beverage bottles were the second most common item recorded by volunteers. Cigarette butts were the first most common.

The same is true closer to home.

“We consistently see, roughly 85% of the litter picked up is made up entirely or in part of plastic,” said Jennifer Caddick, a spokesperson for the Alliance for the Great Lakes.

The organization runs an “Adopt-a-Beach” program, a way for volunteers to adopt a local beach and collect litter while tallying the different types of waste they collect. Caddick said this program has collected around 20 years of data on beach litter.

The category comprising 85% of total trash collected does include items that are partially made of plastic, like cigarettes with plastic filters. Caddick also said around 25% of litter is food and beverage related, whether made of plastic, glass, or Styrofoam. Additionally, she estimated that this figure is likely much higher, as 40% of collected litter is classified as “tiny trash,” small pieces of larger items that aren’t identifiable. Caddick predicted that most of this tiny trash is food or beverage-related waste.

There is much to review in the consideration of ditching plastic bottles. These considerations bounced around in my head countless times while I stood in front of the drink fridge at Sparty’s Cafe, trying to fight my Vernors craving in favor of a less microplastic-filled, more environmentally friendly alternative. While nearly all purchases contribute to the greenhouse gasses produced during manufacturing, avoiding plastic still may be better for the environment.

Evidence may not provide strong conclusions on how drinking from plastic bottles may be affecting our health. But some, including myself, are asking themselves if it is really worth it to wait around and find out.

Share and discuss “Is it time to ditch the plastic bottle?” on social media.