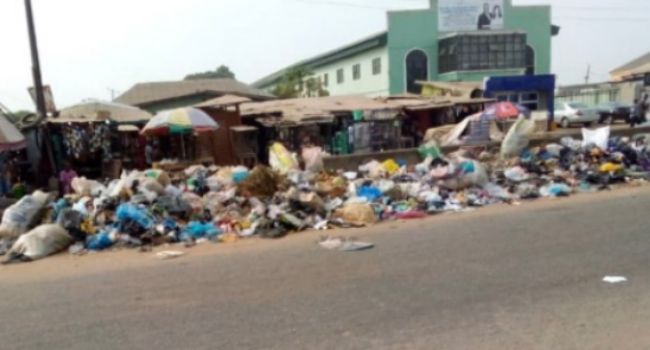 TIJANI ABDULKABEER, a journalist from the University of Ibadan, during a recent trip to Sango Otta, Ogun State took a look at the waste disposal habit of the residents and its impact on the environment. His report:

It was a rainy day on Saturday, January 8, 2022 when this reporter visited Iyana Iyesi, in the Sango Otta area of Ogun State. The forty minutes of rain flooded the whole area and both residents and commuters were stalled for many hours.

The drainages were blocked with refuse, causing the water to channel itself from the highway into major streets disrupting trading activities.

For many residents in the area, dumping their refuse by the road side was the only option to get rid of waste, but these habits have been described as a crime against the environment.

Despite the existing laws prohibiting indiscriminate disposal of waste, residents still litter major roads in the gateway state with heaps of refuse.

A report shows that no fewer than 60 landlords and tenants have been displaced by floods in the Ifo Local Government Area of the state, leaving many residents homeless.

The United Nations High Commissioner for Refugees (UNHCR) estimated that each year, nearly 20 people are displaced every minute, about 21.5 million people a year.

One problem…many challenges for residents

Adedimeji Yunus had arrived at the Sango Otta area from the neighboring Lagos State for a reunion with his family members.

He became infuriated after he lost count of the number of garbage packaged in sacks or nylon bags and dumped at almost every bus-stop around the Sango-Otta axis.

The volume of refuse dumped by the roadside from Sango under the bridge to Oju–ore, Obasanjo, Iyana–Iyesi, the Bells and Iju-Ota were capable of exposing the whole area to a cholera outbreak.

Illegal dumping of waste by the roadside, Sango-Otta

While some packaged the refuse in a sack or nylon before dumping it by the roadside, many others devised alternative means by burning the refuse in an open space.

In 2020, the Ogun State Government arrested and prosecuted 128 environmental offenders, as part of efforts to maintain a clean environment and reduce incessant flooding across the state.

A 2019 study published in Global Journal and Research Review stated that indiscriminate disposal of waste exposes humans to such environmental hazards as drainage obstruction, flooding, and widespread infectious disease, among others.

Some of the environmental offenders  within the community told this reporter that they indulged in the habit because contractors patronizing the area had refused to collect their waste.

For Tobiloba Adigun, who sells kitchen utensils around the Bells area, dumping waste by the road side opposite her shop is the only option she had for trashing waste.

Pointing to the road where she dumped waste, Tobiloba claimed she committed the environmental crime because that was where the waste collectors usually had access to it.

Apart from Tobiloba, many of the environmental offenders who spoke with Ripples Nigeria blamed the refuse contractors for their actions.

Findings by this reporter showed that the two major refuse contractors operating on the Sango-Ota road, OAAM Nigeria Limited and God’s Glory International Ventures have not been visiting the area regularly.

A waste collection card obtained from one Noah Aderoju who resides around Sango-Ota showed that one of the refuse contractors has not been collecting his refuse since 2018 despite his prompt payment.

Aderoju is a customer of God’s Glory International Ventures with prompt payment of monthly dues between N500 and N700. The waste collection card showed that the last payment was made in August 2018.

Aderoju while speaking with our reporter noted that God’s Glory International Ventures had refused to collect his waste since 2018 despite his prompt payment.

When asked why the refuse contractor had refused to collect his waste, Aderoju said “I do not know, it also applies to other people too and we are yet to know the reasons”.

For Titilade Abideen, a resident in the Sango area of Otta, it was as if the waste collectors had vowed not to visit her area again. She claimed that the last time waste collectors visited their area was in 2015.

“When they started they were coming like twice in a week and people were doing it real-time with them but later they stopped and started coming like once in a week or month. There was a time they went for like six months without seeing them. Now, they have even stopped coming.”

In 2021 the Ogun State Ministry of Environment and Ado/Odo/Ota Local Government collaborated with OAAM Nigeria Limited as one of the official waste collectors in Otta.

Residents in the areas served by this private company were not only displeased with its inconsistencies, but also complained about its charges.

Bola, a resident in the Benja/C4 area of Otta while speaking to this reporter noted that despite not consuming much waste, she was being charged N750 monthly. She explained that she had on several occasions tried to haggle the price with the officials, but they said it was fixed.

“After some months, I could not afford the charges again, I had to withdraw and start burning whatever I used as waste in my compound”.

Another resident, Abdulhameed Bolaji, a POS operator along the Iyana-Iyesi road stressed that he used to dump waste by the roadside because waste collectors do not collect his waste regularly.

“When they (waste collectors) did not come regularly , I cannot continue keeping dirty inside my shop. I do not have a choice than to burn it and that is what I  usually do”.

Miss Oyeniyi Temiloluwa, an SDG expert and President, Green Plan Solution (GPS) said that the act of dumping waste by the roadside persists because perpetrators were not aware of the dangers inherent in such practices.

“The perception is that if they drop it on the floor someone would come for it. So, people need to be oriented about the disadvantages of this act, that way it helps them to be conscious and act better.”

Speaking further, she explained that finding a lasting solution to the menace was not limited to government alone but includes the collective efforts of residents.

She noted that the government had already set up agencies “but people still have their way around messing up the environment. Government needs to create more awareness and educate the people before implementing policies.”

She also suggested that the relevant agencies should be empowered to punish offenders. “There are various policies already but I think there is the need to focus on policies that work,” she added.

Heap of refuse under the bridge Sango

Contrary to the residents’ claim, the waste operators chairman explained that residents indulged in the habit of burning refuse and dumping waste by the roadside because they do not want to pay for waste charges.

“All they told you is a blunt lie. I am the Chairman of all waste operators in Ogun State. Whatever I tell you, it is authoritative.

“If the government can start arresting and prosecuting them, they would be forced to submit their waste to operators, and the situation would reduce”.

Speaking with Ripples Nigeria, the Special Assistant to the Ogun State Governor on environment, Oladimeji Oresanya blamed the indiscriminate waste disposal by the roadside on the poor orientation of the people about proper waste management.

“Waste is supposed to be stored in either a household container or a government container. The first stage of proper waste management is storage. If your waste is not properly stored it can’t be effectively managed.

“Many of our houses do not have waste storage cans. They throw their waste on the road and because the government comes there to pick it up everyday the bad habit is reinforced.”

Speaking on the government’s efforts, Oresanya noted that the state was working to curb the incessant dumping of refuse by the roadside. “We will be forced to compel people to have dustbins in their houses. Though the law makes adequate provisions for the punishment, it is not punishment first but education. When we educate our people we do our own beat.

“So, it is not a matter of punishing people, it is a matter of ensuring we have a structure that would encourage collaborations between the government and the people,” he said.

As a media platform, we hold leadership accountable and will not trade the right to press freedom and free speech for a piece of cake.

If you like what we do, and are ready to uphold solutions journalism, kindly donate to the Ripples Nigeria cause.

Your support would help to ensure that citizens and institutions continue to have free access to credible and reliable information for societal development.