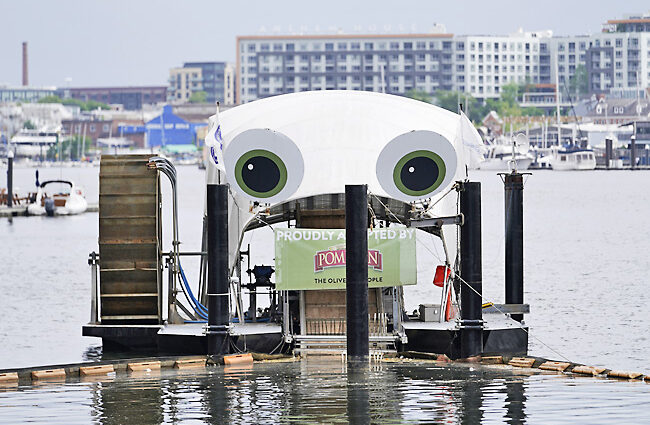 AP – Floating fences in India. Whimsical water- and solar-driven conveyor belts with googly eyes in Baltimore. Rechargeable aquatic drones and a bubble barrier in the Netherlands.

These are some of the sophisticated and at times low-tech inventions being deployed to capture plastic trash in rivers and streams before it can pollute the world’s oceans.

The devices are fledgling attempts to dent an estimated eight metric tonnes of plastic that gets into the ocean every year. Once there, it maims or kills marine plants and animals including whales, dolphins, and seabirds and accumulates in the Great Pacific Garbage Patch and other vast swirls of currents.

Trash-gobbling traps on rivers and other waterways won’t eliminate ocean plastic but can help reduce it, say officials with the United States’ (US) National Oceanic and Atmospheric Administration’s (NOAA) Marine Debris Programme.

“It’s just hard to get out to our big open oceans and collect the trash there,” said Director Nancy Wallace. “We’d much rather collect that trash closer to shore, which is easier. It’s less costly, and we can have that impact before it gets into the ocean.”

Trash is blown, washed or thrown into waterways nearly everywhere. Storm drains funnel in litter tossed onto streets. In places without refuse collection, people use convenient waters to carry trash away. 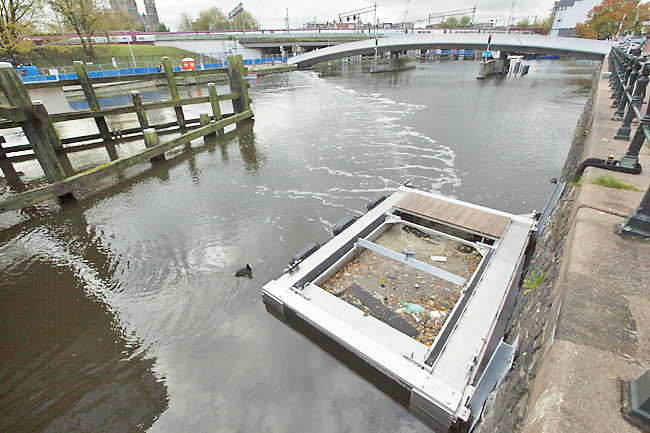 The science of plastic pollution is new and almost as much in flux as the waters it studies. For instance, a scientist who reported in 2017 that rivers might carry anywhere from 410,000 to four million metric tonnes of plastic a year into the sea also was part of a 2021 study that narrowed the range considerably, with an upper limit of nearly 2.7 million metric tonnes.

“Compared to other pollutants… available data on plastics is still scarce,” Christian Schmidt, of the Helmholtz Centre for Environmental Research in Leipzig, Germany, wrote in an email.

DC Sekhar of Bengaluru, India, designed a low-tech trap for rivers in his country after he left a career in commercial shipping.

As an oil tanker captain, “I had travelled around the world and seen waterbodies that were fairly clean”, while trash fouled India’s, he said.

Wanting something modular, inexpensive, easy to maintain and able to withstand monsoons, he designed stainless steel mesh fences that extend above and below aluminum floats 1.2 metres long.

Each is angled to guide trash to a riverbank where excavators pile it into dump trucks.

Eight traps on India’s Cooum River at Chennai, costing about USD120,000 total, corralled about 2,200 metric tonnes of plastics and 19,800 metric tonnes of other trash and floating plants in 2018, their first year in position, said Sekhar.

The system with the biggest fan base may be the anthropomorphised Trash Wheels at the mouths of four Baltimore watersheds.

“They are a really great model for how to get the public involved and attentive to the issue,” MaryLee Haughwout, then acting director of NOAA’s Marine Debris Programme, said in April.

The programme has helped pay for trash traps in the Anacostia River outside Washington DC, and the Tijuana River estuary in California and Mexico but is not involved with the Trash Wheels.

The devices use ancient and modern technology to run rakes and a conveyor belt that move floating trash into barge-mounted dumpsters.

When the current slows, a solar-powered water pump spins the wheel.

Together, Mr Trash Wheel, Professor Trash Wheel, Captain Trash Wheel and Gwynnda the Good Wheel of the West, named for Gwynns Falls, have taken in more than 1,800 metric tonnes of trash, including 12.6 million cigarette butts and nearly 1.5 million plastic bottles.

They are turned on only during and after rainstorms, when large amounts of trash show up.

Mr Trash Wheel and his younger “relatives” have curved sailcloth shells above their workings, a water wheel on one side, and sport 1.5-metre googly eyes. Each has a personality profile on the web, and Mr Trash Wheel has an active Twitter account.

A similar device called Wanda Díaz is being installed on the Juan Díaz River at Panama City, Panama by non-profit La Marea Verde. It won’t have googly eyes but will have AI software to analyse the trash on its conveyor belts.

In The Netherlands, Bubble Barrier Amsterdam pumps compressed air through a perforated tube set across the River IJ at Westerdok, where several canals flow into the river. The tube is set diagonally to direct trash to a rectangular collecting device near the shore.

The WasteShark, a boxy 157 centimetre aquatic drone, was developed about 57 kilometres away in Rotterdam. A drone’s hold can accommodate 160 litres of trash, floating plants and algae, according to RanMarine Technology. They can operate up to eight hours on a charge.

More than 40 have been sold worldwide to buyers in a dozen countries including the United Kingdom (UK), US, Nigeria and Singapore, chief operating officer Esther Lokhorst said in an email.

Osprey Initiative LLC, of Mobile, Alabama, works on an even smaller scale, setting up floating traps on creeks, canals and rivers in the US Southeast and training local crews to empty the traps, then sort, analyse and dispose of trash.

The company employs about eight to 10 people full-time, with about 30 part-time local workers at projects across nine states, said owner and founder Don Bates.

“If you can work with us part time for six months – and our work is dirty, nasty work – you come out of it with a changed view of your impact on the environment,” he said.

In the end, said NOAA’s Haughwout, reducing marine plastic will require fundamental changes such as making and using less, particularly single-use plastics such as straws or cutlery; recycling; reusing what you can and choosing reusable items over disposable ones.

“In addition to disposing of waste, I like to emphasise awareness,” she said. “I think people don’t understand how they contribute.”

2022-06-16
Previous Post: Regulating The Environment Through The Securities And Exchange Commission
Next Post: Aéro Montréal launches 4 new initiatives in response to the needs of the Québec aerospace sector