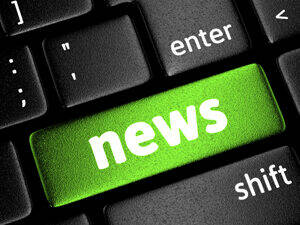 An increasing workload and a toxic work environment are what Trafalgar’s utility and streets superintendent says pushed him to resign from his job this month.

Lee Rodgers had been superintendent for 21 years, where he oversaw the utilities, water, wastewater, streets, planning and zoning, and much more. But the increasing stress from all the town asked of him over the years took a toll on his physical and mental health, and it became too much to handle, Rodgers said in a written statement he sent to the Daily Journal.

Rodgers submitted a two-week notice of his resignation on July 4 after he returned from a vacation. He originally did not explain why he was leaving when he sent his resignation to town officials.

While he is grateful for the friendships he made working for the town, over the last few years, Rodgers said his responsibilities added up, and he kept taking on more that was outside of his job description.

“For the past 21 years, I have worked hard for them and always did my best,” Rodgers said in the statement. 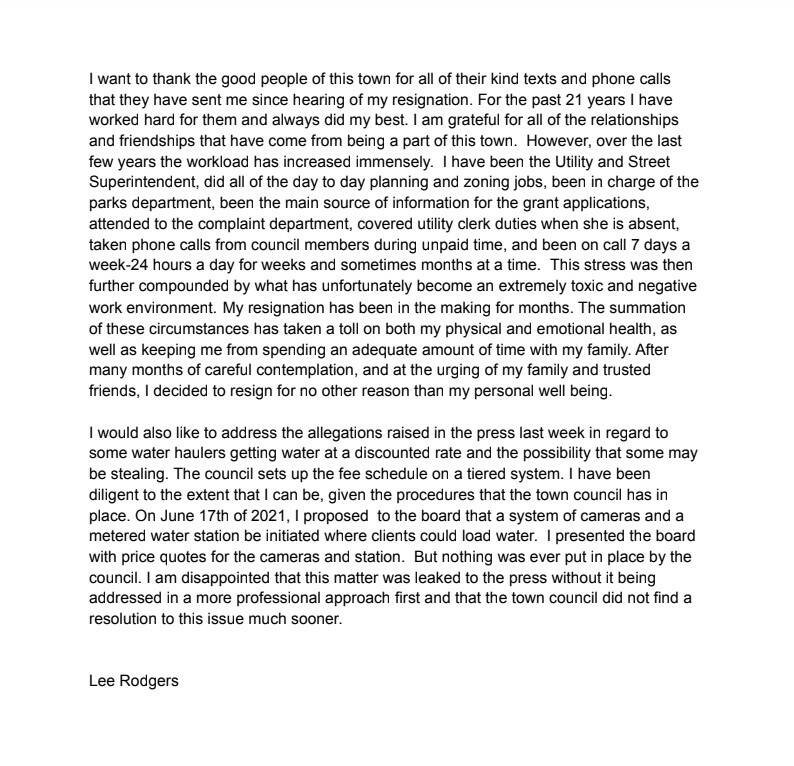 On top of being superintendent, he also took charge of day to day planning and zoning jobs, managed the parks department, been the main source of information for the grant applications, tended to the complaint department, and he covered utility clerk duties when she was absent. Rodgers also said he would take phone calls from town council members during unpaid time, and he would often be on call seven days a week-24 hours a day for weeks and sometimes months at a time.

This work was also compounded by an increasingly “extremely toxic and negative work environment” at the town, he said.

“The summation of these circumstances has taken a toll on both my physical and emotional health, as well as keeping me from spending an adequate amount of time with my family,” Rodgers said in the written statement.

Though it seemed sudden, Rodgers said he had been contemplating leaving for months, with encouragement from family and friends.

His resignation notice came a week after the Trafalgar Town Council held a special meeting on June 27 wanting to crack down on the town’s lack of accountability in selling water to bulk water haulers — a system Rodgers oversaw as the utilities supervisor. The council held the special meeting while Rodgers was on vacation.

Trafalgar has always been on an “honor system,” when selling bulk water to commercial contractors, and it has no system to formally track purchases. Haulers who purchase bulk water from Trafalgar could fill up at any fire hydrant in the town, and then call Rodgers to report how much they took.

This system has recently faced scrutiny from some town council members, including council president Jessica Jones, who claimed that some water haulers might be stealing because of the lack of formal system. However, no proof of theft has been produced.

Jason Ramey, a council member, said it seemed like some council members implied during the special meeting that Rodgers was either helping or “turning a blind eye” to the haulers who were allegedly stealing. He said Rodgers contacted him the next Monday after the meeting, on July 4, to tell him he “had enough of this.”

“We’re losing an asset because he just isn’t comfortable being at work anymore … because of the way he’s treated, and he’s questioned about everything,” Ramey said.

Jerry Rafferty, also a town council member, said Rodgers likely did feel targeted when the meeting was held and the council knew he couldn’t be there.

“If I were sitting in Lee’s shoes, I would certainly feel like that was directed at me,” Rafferty said.

Rodgers, in his statement, said his decision to leave was for “no other reason than my personal well-being.” However, he addressed the bulk water issue because allegations were made in a local TV news story that implied he left because he was involved in giving bulk water haulers discounts or letting them steal.

The council was responsible for setting up the bulk water billing system and the rates that are in place. Rogers just did his best to follow it, he said.

“I have been diligent to the extent that I can be, given the procedures that the town council has in place,” Rodgers said in his statement.

Rogers said he proposed a plan in June last year to set up security cameras and a metered water access point for haulers to purchase water, but the council did nothing at the time. He added he was disappointed the council did not come up with a resolution sooner.

Jones, in a written statement, thanked Rodgers for all he has done for the town, and said she sent him a personal thank you message.

“Mr. Rodgers played a integral role in the development of Trafalgar into the town that it is and I personally sent Mr. Rodgers a thank you and to wish him best on in his future endeavors as well,” Jones said in the statement.

Council members Jeff Eisenmenger and Kyle Siegfred did not respond to requests for comment.

The town council is now tasked with replacing Rodgers. Council members agree the town will probably have to hire one or two additional people to fill all the jobs Rodgers took on as superintendent.

They had discussion at a special meeting Tuesday about splitting the position into two — a wastewater and utility superintendent and a street superintendent. That, however, is all dependent on funding available and an ordinance would have to be passed to create a new job.

Rafferty agreed that at least one or two additional people could be hired to fill Rodgers’ job.

“There’s nobody else really in town to go to, to get answers. If somebody needed something, you ask Lee and Lee would do it, and he would do it happily,” Rafferty said. “Underappreciated would be the word I would use for sure.”

The toxic work environment Rodgers mentioned in his letter has also been going on for a while now, Ramey said.

He said former utility billing clerk Wendy Blackwell also left in 2020 because of a toxic work environment. In a written statement sent to the Daily Journal Tuesday, Blackwell named Clerk-Treasurer Donna Moore and unnamed town council members as contributing to that environment for all town employees. Rodgers did not reference anyone specifically in his statement.

Blackwell said she enjoyed working for the town for 12 years, but she could no longer handle the work environment at the town hall, specially referencing the way she felt and others were treated by Moore.

“Often times she would yell or talk very mean to me or other employees. When she pulled into the parking lot at work, any coworkers in the building would leave the office quickly,” Blackwell said in the statement.

Moore denied these claims in a written statement. She said she does not oversee that department and had little daily interaction with the utility office, including with Blackwell. Moore did often feel she was met with “unfriendliness,” though, when she tried to impose changes to processes at the town hall, she said. She decided to start working from home starting in 2020 because of the building tension, she said.

“The tension had gotten very bad at the Town Hall at all levels, so at the start of 2020 I had started working from home and do so currently.” Moore said in a statement.

For Ramey, he hopes the town council can start addressing how to fix the toxic work environment, now that he has been made aware of it.

“I wish I would have known more about it, or I wish people reported it, so that we hadn’t gotten to this point,” he said.

Jones, in her written statement, said it is a personal goal of hers to ensure a safe work environment for town employees and improve the town’s services to the community.

“I thank Mr. Rodgers for his willingness to share why he resigned so that the Town of Trafalgar can implement a standard of polices and procedures into the handbook for any employee that may need to utilize the opportunity for safe communication and reporting of situations such as these,” Jones said.

Rafferty thinks the town council should look into the claims of a toxic work environment. However, most people working at the town hall are elected officials, so it might be up to voters in the community to fix the issue, he said.

“Where’s the toxic work environment coming from? It’s coming from those elected officials. And what do you do about that?” Rafferty said. “That’s the ultimate issue, how do you fix that problem in the community? The community are the only people that can really fix the problem.”