Why Waste Management Stock Could Be Attractive (NYSE:WM) 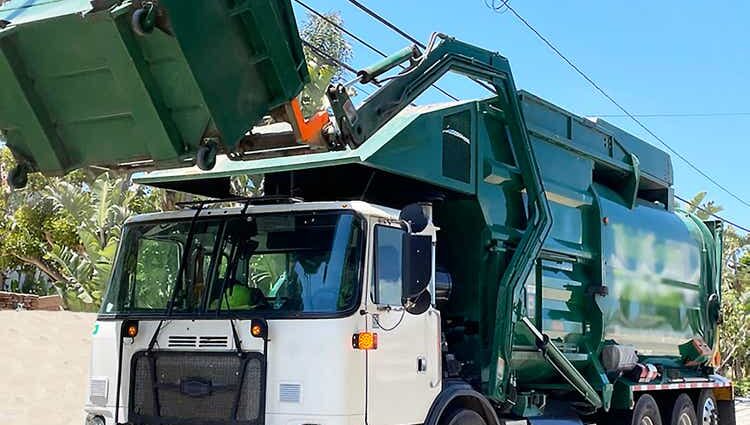 Waste Management (NYSE:WM) has lost about 10% of its market value year-to-date, in comparison with the more than 20% decline of the S&P500.

We expect that firms in the Environmental and Facilities Services industry, which generate most of their revenue in the United States, are not likely to be significantly affected by the declining consumer confidence and the strong U.S. Dollar. Also, due to the high barriers of entry to the industry, and the high industry concentration, we believe WM is well-positioned to offset the elevated costs by increased pricing.

In this article, we will take a look at what could make WM an attractive choice in the current market environment.

Consumer confidence is a leading economic indicator, which is often used to forecast near term changes in the consumer spending behavior. When consumers are less certain about their financial outlook, they tend to spend less and save more. This behavior normally negatively impacts the demand for durable, discretionary, non-essential goods. Firms that generate their revenue by manufacturing or selling such goods are likely to face substantial headwinds during times of low confidence.

Consumer confidence has been gradually declining in the United States in the past months. It has even fallen below levels that we have seen during the financial crisis in 2008-2009. Although consumer spending has remained strong in the first half of 2022, we believe that the declining confidence will eventually lead to a slowing in consumer spending.

But does it actually impact Waste Management negatively?

Let us take a look at three periods in the last 20 years that have been characterized by low consumer confidence, and see how WM’s stock has actually performed during these times.

While in this period both Waste Management and the S&P500 closed in negative territory, WM lost only 17% of its market cap, while the broader market declined by more than 32%.

Once again a similar behavior can be observed. In this three-year time frame, both WM’s stock price and the SPY declined. WM lost only 8% of its market value, while the SPY declined by more than 21%.

In this last period however, while the SPY gained more than 13%, Waste Management was down by about 8%, mainly driven by the underperformance in the second half of 2011.

Although we believe that WM is not materially influenced by the level of consumer confidence, we cannot establish a clear trend of outperformance during times of low confidence. Although past performance is not always useful to predict future performance, due to the lack of strong correlation between confidence and price performance, we cannot rate the stock as “buy” based on this criteria.

The strong U.S. Dollar can negatively impact the earnings of firms that are selling a large portion of their products and services in foreign countries.

Waste Management is likely to remain relatively unaffected as most of their revenue is being generated in the United States, and a smaller portion in Canada.

For this reason, we believe WM could be an attractive option for investors, who are looking to reduce their currency exchange risks.

In the last decade, Waste Management has been committed to return value to its shareholders through share buyback programs.

In this time frame, they have reduced their number of shares outstanding by as much as 11%. In late 2021 the firm also announced that its Board of Directors have authorized a share repurchase program up to $1.5 billion.

We find not only WM’s strong track record of share repurchases attractive, but also its history of dividend payments.

Currently WM pays a quarterly dividend of $0.65, which corresponds to an annual dividend yield of about 1.7%. Although the yield may not appear extraordinarily high, the firm has a long track record of paying and increasing its dividends. In 2021, the firm actually announced a 13% increase of the dividend.

Also, as we expect the firm to remain relatively unaffected by the current macroeconomic headwinds, we believe that the dividend payment is safe and sustainable in the near term.

When looking at the dividend safety grade of the firm, we see that the payout ratios appear to be significantly above the industrials sector medians. We do not see this as a concern, as the ratios are in-line with the firm’s 5-year average.

In our opinion, WM could be an attractive addition to a dividend or dividend growth portfolio.

However, before adding any security to our portfolio, we have to take a look, what could be a reasonable price and what could be the fair value of the security.

When looking at several valuation metrics, including price multiples, WM’s stock appears to be trading at a significant premium compared to the industrial sector medians. Not only does it trade above the sector median, but it also trades above its own 5-year historic average in the majority of the cases.

The waste industry in the United States is relatively concentrated, with few key players. Also, the industry has a relatively high barrier to entry, reducing the threat of new entrants into the space. On one hand, we believe that this could give WM and some of its larger peers somewhat of a pricing power. On the other hand, we believe that the waste industry in its current form is already in the mature stage, likely not providing significant growth opportunities.

Further, the strong first quarter performance of WM, also makes the valuation reasonable, despite the slight negative impact of elevated commodity prices on the margins.

All in all, however, we believe that the current price levels could be justified, due to the above listed factors.

Although there has been no clear correlation between WM’s performance and the consumer confidence in the U.S., we believe that the firm’s financial performance is largely independent of the consumer behavior.

The safe and sustainable dividend, combined with the firm’s consistent share buybacks and low exposure to foreign currency exchange risks make WM an attractive option in the current market environment.

While the valuation appears to be high compared to the industrial sector median, we believe the premium is justified, due to the firm’s potential pricing power.

2022-07-15
Previous Post: How does your garden grow?
Next Post: The Hellenic Initiative celebrates its 10th Anniversary of Uniting the Diaspora for Greece with 6th Annual Venture Fair and a Gala Reception at the Iconic Zappeion Megaron in Athens