MANILA, Philippines – In her first speech as the Marcos administration’s environment secretary, Maria Antonia “Toni” Yulo-Loyzaga laid out the direction she wants the Department of Environment and Natural Resources (DENR) to take under her watch.

Two things stood out from her policy declaration – her emphasis on making the department open to inputs of civil society and other sectors, and ensuring all policies implemented or supported by the agency are “science-based” and “evidence-informed.”

Loyzaga addressed officials and staff of the DENR for the first time on Thursday, July 21, a day after she took her oath before President Ferdinand Marcos Jr. The occasion was the turnover of leadership of the department held at the DENR’s central office in Quezon City. Watch her entire speech below. 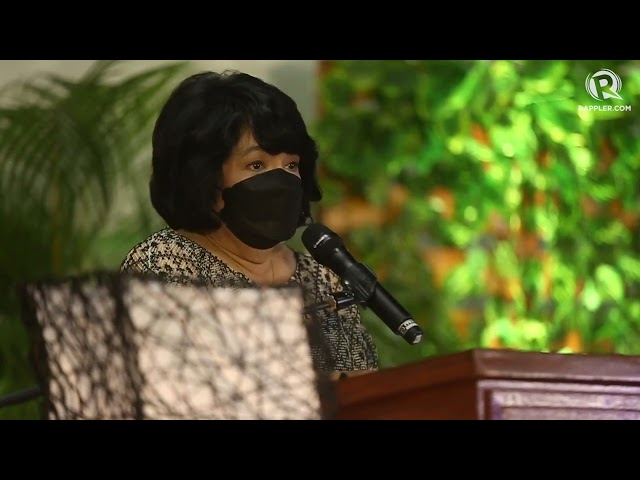 At the onset, Loyzaga called on DENR officials to consider themselves not just a part of the DENR family but part of a “family of stakeholders that we actually represent.” It was a call for the DENR to see itself not just as a government body working within its own bubble, but a part of a group with sectors impacted by environmental policies.

“We want a stewardship that is democratic, where stakeholders can participate, where there is transparency in the department’s plans and decisions,” said the environment chief, adding later that policies and programs should “involve consultation with our stakeholders.”

The DENR has always had to deal with highly passionate and vocal green groups, indigenous peoples, business and industry groups, and more in the course of its work as a regulatory and conservation agency.

There has often been tension in these dealings, particularly in issues like mining and waste incineration, where nongovernmental organizations and community organizations would often complain about being shut out of consultations. For instance, mining transparency advocates were up in arms when the Duterte administration withdrew the Philippines from a mechanism that required the government to disclose data about the mining industry.

In relation to her call for a more wholistic approach, Loyzaga called the various agencies and bureaus under the DENR, and the entire department itself, to “work across silos.”

“We need to harness our expertise and make sure that the capabilities of the different sectors, the different bureaus, actually are in line and support each other,” she said.

When her nomination was first announced, NGO Alyansa Tigil Mina voiced worries about how she would be able to handle “vested corporate interests that want to influence DENR policies.”

Loyzaga, who has decades of experience working in the academe and scientific institutions, also emphasized her wish for the DENR to embody “ethical stewardship” by upholding “scientific and technical excellence.”

“We want to invest in a scientific risk-based approach. We want some quantified impact metrics…. We strive then to make sure that legislation is evidence informed,” she said.

Climate change is a major component of the five areas she wanted the DENR to champion under her leadership.

The five priorities she laid out are the following:

Clearly, Loyzaga plans to tap into her expertise and network in climate change and disaster resilience. She spoke of using science to address the impact of climate change both on the national scale, and down to communities like cities, towns, and villages.

There was also a clear acknowledgement of the DENR’s tricky balancing act in relation to its role of protecting natural heritage and at the same time developing or exploiting it for economic growth and other benefits.

One immediate priority was the accounting of natural resources which she said needed to “take place very, very soon” as the Marcos administration comes up with its “plans.”

“This will in fact involve the use of science and technology, as well as the use of financial management and economics, and that means we will have to work across the different departments to achieve that foundation,” said Loyzaga.

There is still a ban on logging in all natural and residual forests, in place since a 2011 executive order by the late president Benigno Aquino III. In 2021, then-president Rodrigo Duterte lifted the ban on open-pit mining introduced by the late former environment secretary Gina Lopez.

Loyzaga made a specific pitch for the DENR to engage more with urban areas, which would likely mean working closer with city governments in policies related to air pollution, sustainable urbanization, climate-proofing, and more.

“They’re [cities are] the engines of growth, but they depend largely on the ecosystems that support them, and the role of the DENR cannot be minimized in terms of trying to support the economy of our country, at the same time the social and inclusive development of our nation,” said the Secretary.

Cities are an important battlefield for efforts to stave off climate change.

Though cities make up less than 2% of the Earth’s surface, they consume 78% of the world’s energy and produce more than 60% of greenhouse gas emissions, according to the United Nations Human Settlement Programme.

Another important policy declaration Loyzaga made was more administrative in nature – digitizing DENR systems, including transactions.

“We strive for efficiency but also technical excellence in the conduct of our work, especially in government transactions, efficient use of our resources, and the digitization, hopefully, and modernization of our information management systems,” she said.

Pushed by the pandemic, the DENR managed to digitize applications for environmental compliance certificates (ECCs). The process is now done online, minimizing human intervention and saving time and effort in the part of applying entities – often private establishments or firms seeking ECCs for the construction of buildings or other facilities.

Loyzaga’s first speech set a promising tone for her DENR leadership, one that environmental groups, scientists, businesses, and the rest of the regulatory and governance sector will be closely watching. – Rappler.com