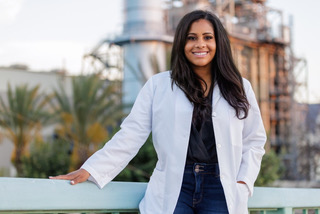 Dedication and commitment are two outstanding virtues to possess.

For Ravyn Williams, a medical practitioner at Kaiser Permanente in Los Angeles, public health has been at the center of her existence for some time.

“Public health has been a driving force behind my professional choices, and it’s a personal endeavor that began in childhood,” she said. “I grew up in Chicago in a small apartment contaminated with hazardous materials. Our community was filled with factories pumping out toxic chemicals. So many people I knew were directly affected by environmental pollution.”

Williams saw firsthand what pollution can do and it left a lasting and painful memory.

“Saddest of all, when I was 15, my mom died from leukemia. She was only 37. Since that time, I have committed my life to fighting for healthy communities. In my twenties, I worked incredibly hard to overcome a myriad of obstacles and was accepted to Stanford University [Medical School] where I trained in the Primary Care Associate Program. My commitment to improving people’s lives led to a career as a PA in the field of cardiac electrophysiology and catheterization at Kaiser. Here, I focus on preventing and treating heart disease and rhythm abnormalities,” she pointed out. “I’ve come to recognize that asking people to change their habits isn’t enough, because many risks are rooted in larger socio-economic factors. Prevention can often depend on access to a healthy environment.”

Williams added: “For instance, when you live next to an oil refinery, an asphalt plant, or a highway, going for a walk to help your heart is counteracted by the toxic fumes you have no choice but to inhale,” she noted. “These environmental pollutants raise the risk not only for heart disease but for autoimmune diseases and cancer. Air toxins can change the structure of coronary arteries, reducing elasticity, and increasing stiffness. This in turn can lead to higher cholesterol, clotting, and heart attacks. Yet, most low-income communities don’t have the luxury of moving somewhere less polluted. The only solution is to clean up our communities.”

Waste is ever present, including plastic, which has been at the forefront for Williams.

“During the pandemic, I saw the overflow of takeout containers everywhere – on the streets, in parks, spilling over trash bins. At the same time, I was overwhelmed by all the waste in my hospital,” she said. “COVID just made it worse. Everything has become disposable. Living next to a power plant in Burbank, I began to think that even my community was being treated like it was disposable.”

Williams went on: “The amount of energy and resources that go into producing single-use packaging is insane. We throw everything away and yet there really is no “away.” All this material ends up in landfills that off-gas methane, a super-pollutant leading to wildfires, drought and asthma. Corporations want us to feel like it’s all up to us to reduce, reuse and recycle and yet our lives have become so busy that it’s really hard to do the right thing,” she said. “During the lockdown, when public health was at the forefront of our lives, I was triggered to act, and I had found my cause. I realized that waste is a design problem that I could help fix.”

Lia Hirtz is the owner of World Empanadas on Magnolia Blvd. in Burbank and is also on board in an attempt to trim plastic waste.

“I’m concerned about leaving a better earth for my grandkids and all the children that are coming up,” she said. “This problem should be eradicated. I think more people should do more, but we are not educated, including myself. I really liked what Ravyn has to offer. I think it’s a great idea and I think all small businesses, little by little, we all should make a difference when we come together.”

Being proactive is critical if the plastic waste problem is to be solved, according to Williams.

“We need to wake up to the fact that recycling isn’t working! I know that is hard to hear because we all really want recycling to work but it’s simply not the truth,” she said. “Less than 10 percent of plastic is recycled right now in California. Millions of tons of plastic enter our landfills and oceans every year. What’s scary is that microplastics – the byproduct of these materials – are in our food, in the air, and have even made their way into our bloodstream.”

Williams has some ideas on how to combat the problem of plastic waste.

“I started looking into alternatives to recycling. Materials that are labeled compostable or biodegradable, in a lot of cases, are as harmful as plastic,” she said. “There’s also a lot of “greenwashing” in industries, where products are all labeled “safe,” but the misleading claims lack concrete information about the real environmental impacts.”

Williams spoke about her website. “I started Taki2go with a focus on reduce and reuse,” she said. “How do we help the public have agency in creating a safer environment and investing in their own health? How can we work with industries who rely on takeout containers and give consumers real choices that don’t hurt them or our environment?”

Williams cited an example of how her site is partnering to make smart choices.

“Taki2Go is working on a reusable take out container and a system that businesses can participate in to reduce their costs while also building a loyal customer base,” she said. “Those with in-house kitchens, like hospitals, can eliminate dishware altogether and reap the benefits of significantly reduced water and energy usage.”

Though the problem of waste and specifically plastic waste is here, they can be tackled.

“We are prototyping, engineering, and fundraising,” Williams said. “The plan is to launch with local restaurants, starting right here in Burbank and the surrounding Los Angeles communities.”

Williams continued: “I like to stay grounded in my personal beliefs that point to a time when we will no longer have to worry about the effects of climate change – a time when earth’s natural resources will be restored and we will no longer live in fear when it comes to the future of our planet,” she said. “In the meantime, I will continue to fight for a healthier world and healthier communities and encourage everyone to not give up in doing their part.”