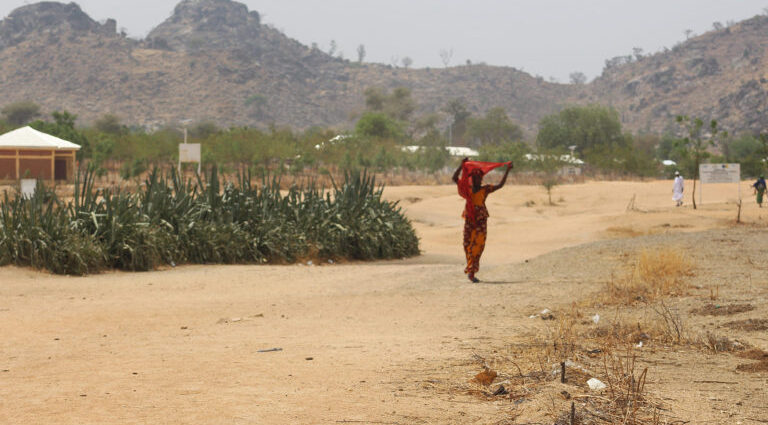 MINAWAO, Cameroon — On market day in the Minawao refugee camp, every necessity is spread out beneath the mid-morning sun: vegetables, dried fish, soap, new and used clothes, farm implements. It could be any other market in Cameroon’s Far North region, but for one detail: at the market’s southern end, beside bundles of firewood, are tidy pyramids of briquettes.

The camp occupies 623 hectares (1,539 acres) on an open plain amid rolling hills. The temperature is 40° Celsius (104° Fahrenheit), and the landscape shimmers as though it were even hotter. Like many other parts of the Sahel, the band of semiarid scrubland bordering the Sahara, this part of northern Cameroon has experienced frequent, intensifying drought in recent years. In Minawao, this has been aggravated by the stripping of virtually every nearby tree for fuel for a local population swollen by the presence of nearly 60,000 refugees fleeing an Islamist insurgency in neighboring Nigeria.

About 80% of people in Cameroon depend solely on wood for cooking, according to one estimate by the Center for International Forestry Research (CIFOR). It puts the amount of firewood burned in the country every year at 2.2 million metric tons.

Less than a quarter of households in Cameroon have electricity, and domestic gas is expensive or not even available in rural areas like Minawao. So people rely on firewood, which is more accessible and affordable.

This places Cameroon’s forests under immense pressure. According to forest monitoring platform Global Forest Watch, Cameroon lost 1.7 million hectares (4.2 million acres) of tree cover between 2002 and 2021, more than 5% of its total. The main drivers of this deforestation included logging, conversion of forests to agricultural land, and harvesting wood for fuel.

Around half of this loss was in humid primary forests in the south and east. But people in the drier, sparsely forested northern region where Minawao is located also cut down trees for firewood and construction and relied on wooded areas for grazing of cows and goats and to gather wild fruits and herbs.

The arrival of tens of thousands of Nigerian refugees in Minawao by mid-September 2016 drastically increased the pressure on these limited forests, as the refugees stripped the landscape for food, fuel and shelter.

As the refugee population grew, the area’s forests were cleared, and tension between the new arrivals and surrounding communities rose, with accusations of assaults on women gathering firewood exchanged, and groups of men from the camps coming to blows on several occasions.

Charcoal from biomass, the new alternative

In 2017, the Lutheran World Federation, a Protestant nonprofit working to support the refugees in the camp, introduced an alternative to firewood: eco-charcoal briquettes.

Ousmane Bidal keeps watch over one of two production units that have been established. It’s a public holiday in April and there’s no activity in the buildings, but he’s there to make sure no one trespasses the boundary marked by a rough palisade fence. One building stores hundreds of eco-stoves meant for free distribution. Another building nearby houses a solar dryer, large sieves, a grinding machine, and other equipment. And bags and bags filled with corn cobs, groundnut shells, rice husks, grass, fallen tree leaves, and other organic household waste. This varied feedstock is put into a metal barrel and toasted. It’s then ground, mixed with water to form a paste, and compressed by hand or using a machine. The resulting bricks or balls are then dried in the sun.

Bidal says this facility produces an average of 200 kilograms (440 pounds) of briquettes a day.

“This innovative cooking energy source is a game changer and has significantly helped us here in the camp,” Bidal says. A father of seven, he fled his home in Nigeria’s Borno state and has no plans to return to the country.

Bidal and his family fled at the peak of Boko Haram’s violence in 2014, after receiving news that the group had ransacked a neigboring village, indiscriminately killing people, stealing food and setting houses ablaze.

Boko Haram continues to be active in Nigeria’s northeast, and while life in Minawao isn’t comfortable, Bidal says he’s afraid to return home.

Like others in the refugee camp, he and his family get a monthly food ration from the U.N.’s World Food Programme. His pay as a watchman for the briquette-making facility helps to cover the cost of their other needs.

The raw material for production was initially comprised entirely of household waste. But demand soon outstripped the supply, according to Tcheou Tcheou Samading Abel, environment and energy officer at L’Agence de Développement Économique et Social (ADES), an international NGO that’s running the alternative charcoal project as well as another one promoting reforestation.

“As more and more people adopted the use of eco-charcoal and learned how to produce it, there was an acute shortage of raw material — household waste,” Abel tells Mongabay. So they turned to SEMRY, the Yagoua Rice Farming Expansion and Modernization Company, for rice husks, “and they responded favourably,” Abel says. Since then, the facility has been able to rely on a stable supply of tons of rice husks from SEMRY.

Abel indicates that since the initiative was launched in 2017, it has trained at least 8,000 households on the production of eco-charcoal from biomass.

For 42-year-old Djumai Bitrus, eco-charcoal is an answer to the chronic scarcity of fuelwood.

“I was compelled to learn how to produce and use charcoal from groundnut shells because there is a lack of firewood which I usually used when I arrived here in 2015,” she tells Mongabay while lighting a charcoal stove to prepare dinner for her family. The scheme has also trained volunteers who in turn train other refugees and locals outside the camp to produce the briquettes, mostly for their own use. The facility Bidal watches over produces eco-charcoal on a larger scale for sale.

Sirri tells Mongabay that wider adoption of briquettes like these across Cameroon could help reduce the felling of trees for firewood and limit the amount of waste that ends up in landfills. She says briquettes are a cost-effective option for low-income households while also providing a possible source of income for small-scale producers.

But the benefits are not yet so clear-cut for many of the camp’s residents.

According to Luka Arona, a field supervisor at one of the production sites, most refugees in the Minawao camp have been slow to adopt eco-charcoal briquettes. “But we keep sensitizing them. We make them to understand that Minawao is home and the protection of our environment is for our collective good.”

Arona’s message about the environmental friendliness of the briquettes hasn’t convinced Abara Goni. One reason he says he prefers to use firewood that he collects from areas around the camp is that he has no money to buy alternatives.

“It is difficult to make cash here,” Goni, 28, tells Mongabay. The refugee says he often exchanges all or part of his monthly food ration for cash. “With the little money I have, I don’t see myself prioritizing the purchase of charcoal. Moreover, I don’t cook often,” Goni says.

The economics of producing the briquettes are also uncertain. Layatou Abila sits on a mat breastfeeding her baby in the shade, chatting with a group of other women at a weekly meeting of members of a cooperative called Hadankai.

Hadankai manages the affairs of the briquette facilities, from production to sales, and pays stipends to its 60 members, who also take home some balls of eco-charcoal. Any surplus left after operating costs and stipends goes into an account at a micro bank that the cooperative’s members can borrow from to set up other income-generating activities like sewing.

There isn’t much surplus. “There is lack of financial motivation. Since this year started, we haven’t received anything. Last year, we had at least something,” Abila tells Mongabay. But she says she remains committed to the initiative as “it is a lifeline for survival.”

At the Minawao market, Faye Mostapha, from the neighboring locality of Gawar, is among the young men selling firewood. Mostapha collects it from around Gawar and Minawao and transports it to the market on his bicycle to sell at Thursday’s weekly market.

“This is an activity my father used to do before he died. There is a steady demand [for firewood] because it is the traditional source of energy for cooking here,” Mostapha says. He adds that business is good, regardless of the apparent damage it’s causing to the environment.

Despite its limitations, the eco-charcoal project in Minawao holds promise in the effort to protect the ecosystem of Cameroon’s Far North, says Xavier Bourgois, a spokesperson for the U.N. Refugee Agency (UNHCR), which runs the camp. Bourgois says the initiative has made the settlement safer, and more inclusive, resilient and sustainable. “Women are protected as they no longer have to expose themselves to the risk of attacks by going out of the camp in search of fuelwood,” he told Mongabay by email.

As there are no indications the refugees will soon return home, the ecological charcoal project in Minawao holds promise in the race to protect the fragile ecosystem of the camp and its surrounding. However, the challenge remains finding sustainable sources of raw materials for the production of the briquettes so the refugees don’t revert to the old normal — felling trees.

Banner image: A refugee from Nigeria walks in the Minawao refugee camp, Cameroon. Image by Amindeh Blaise Atabong for Mongabay.

2022-07-27
Previous Post: Switch to a circular economy could protect the environment while generating more value
Next Post: Issues of the Environment: Improving recycling rates and quality of recycling materials in Washtenaw County