Biodegradable Plastic in Chinese and U.S. Agriculture: Hero or Villain? 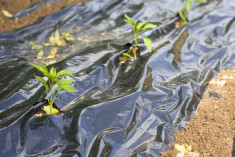 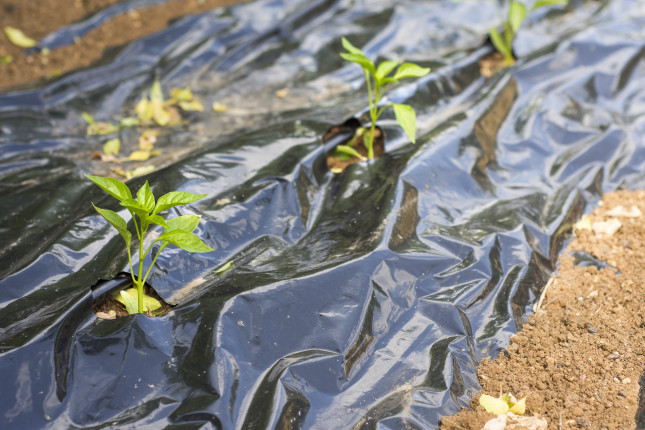 Biodegradable plastic mulch seems like a dream come true for organic farming. Its use eliminates the need for herbicides and pesticides, conserves water, extends the growing season, and allows for the harvesting of clean fruits and vegetables. This mulch also lightens the load of farmers. Rather than assuming the expense and labor to gather up and haul plastic mulch to a landfill, farmers can till biodegradable mulch safely back into the soil. Yet these benefits will only be realized if biodegradable mulch films are 100 percent degradable by microbes in nature, and if they break down to carbon dioxide, water, and minerals without damaging the soil.

Surprisingly, however, biodegradable mulch films are not approved yet for organic agriculture. This is because what seems like a straightforward policy to use biodegradable plastic to eliminate plastic waste in food production turns out not to be so simple in practice. The right plastic for the job will balance the necessary beneficial properties with environmental protection. Plastic mulch has been—and remains—a revolutionary material that is lightweight, flexible, durable, and inexpensive to produce. However, a perfect biodegradable plastic to replace it does not yet exist.

Right now, PBAT is a biodegradable plastic that comes the closest to the mark. A big present market for PBAT is plastic mulch films used in agriculture.

In the United States alone, 126 million pounds of plastic mulch covers crop soils. China has become the world leader in the use of plastic mulch in agriculture, covering 10 percent of its farmland. While both countries struggle with plastic pollution, they are well placed to revolutionize research and policies that lead to agricultural innovations to better protect soil, water, and air from plastic residues.

Setting standards easier than meeting them

China has been using plastic mulch films in its agriculture since the 1970s. Professor Yan Changrong of the Chinese Academy of Agricultural Sciences shared in an email that the direct economic benefits have been significant enough to raise rural farmers out of poverty, adding an estimated 120 to 150 billion Yuan per year ($19 to $24 billion) to rural income by increasing water use efficiency and yields by 30 percent.

Unfortunately, China’s decades of plastic mulch use has resulted in soil plastic pollution that now is beginning to cancel out the benefits. So the push to develop biodegradable solutions has intensified.

Meeting this international standard requires lab testing for content, biodegradation in soil, ecotoxicity, and physical characteristics like strength. The standard requires at least 90 percent degradation in the soil over two years. But, unfortunately, the biodegradable claim is being misused. Early degradable plastic mulches, known as oxodegradable and photodegradable, broke apart but did not completely degrade, leaving behind microplastic that polluted the soil.

Putting it to the test

This weakness in the material also had a third major impact. Biodegradable plastic can also start to break apart in the field, causing pieces of plastic to stick to the crop, contaminating and lowering the value of the harvest. Better training can help farmers overcome these problems. “Laying down biodegradable plastic is an art,” notes Douglas Hayes, a professor in the Department of Biosystems Engineering and Soil Science at the University of Tennessee, in an interview. He says that “extension outreach efforts to teach farmers how to use biodegradable plastic are important.”

In a world with a warming climate, one of the biggest pluses for farmers of traditional plastic mulch is its ability to save water by limiting evaporation. However, today’s biodegradable mulch film is not as effective as traditional plastic mulch in soil warming and moisture retention. Water vapor escapes biodegradable mulch film at 10 times that of plastic mulch. Water loss not only increases the need for more irrigation water, it also leads to heat loss, resulting in poor soil warming.

Working with Markus Flury, a professor of Crop and Soil Sciences at Washington State University, Hayes has studied the degradation of mulches over a range of soil types and climates in Tennessee, Washington state, and Texas—as well as several locations in China. They found that soil degradable plastic actually does degrade in the soil, but that over a period of two years, the results of this process can vary widely.

Cost is another big obstacle to biodegradable plastic adoption. The cost of purchasing and applying biodegradable mulch is 1.5 to 2 times higher than traditional plastic mulch, even accounting for the collection and disposal costs of traditional plastic. This price tag is certainly a barrier to wider adoption of the technology. A survey of U.S. strawberry growers in California, Pacific Northwest, Pennsylvania and New York, found that half of the growers would try biodegradable plastic mulches if the price of doing so dropped.

Those deeply involved in the work of doing such investigations believe such efforts will pay off. Professor Yan says that the quality of biodegradable mulch is improving. The initial mechanical strength of biodegradable mulch film can now reach about 85 percent of the traditional PE mulch film. The water vapor loss rate has also improved by 75 percent. Results show biodegradable mulch works well for potatoes in northern China, and in raising processed tomatoes, tobacco, sugar beets, and rice in cold and dry areas of northwest China.