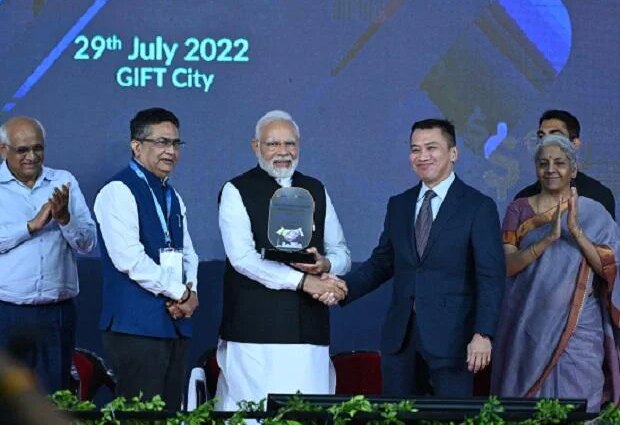 Modi also laid the foundation stone for a Rs 200 crore headquarters building of International Financial Services Centres Authority (IFSCA), and presided over the exchange of memorandums of understanding (MoUs) by IFSCA with foreign regulatory authorities and the Department of Space. Union Minister of Finance and Corporate Affairs, Nirmala Sitharaman, along with Union Ministers of State for finance, Pankaj Chaudhary and Dr Bhagwat Karad, Gujarat CM, Bhupendra Patel, and Gujarat Finance Minister, Kanubhai Desai, also attended the inauguration ceremony at the GIFT City Campus in Gandhinagar.

Once the NSE IFSC-SGX Connect is implemented following a transition period of 4-5 months, all orders on Nifty derivatives placed by members of Singapore Exchange Limited (SGX) will be routed to and matched on the NSE-IFSC order-matching and trading platform.

With this, the average daily volume in Nifty futures at SGX of 109,000 contracts valued at roughly $3.65 billion is expected to move to NSE-IFSC. The Connect is expected to deepen liquidity in derivative markets at GIFT-IFSC, bringing in more international participants and creating a positive impact on the financial ecosystem.

Similarly, IIBX at GIFT City will help the Indian bullion market transit towards a more organised structure by allowing qualified jewellers to import gold directly using the exchange mechanism. India’s first such bullion exchange, IIBX will aid efficient price discovery and ensure standardisation, quality assurance and integrated sourcing, in addition to speeding up financialisation of gold in India. IIBX will also reinforce the Centre’s goal at enabling India, one of the principal consumers of gold, to influence global prices of the metal.

Reiterating that many milestones were announced for IFSC at GIFT City on Friday, Modi said that India would now stand at par with countries like the US, the UK and Singapore in giving global financial services a direction.

Talking about Gujarat’s GIFT City being ahead of its times, Modi said “Even amid 2007-2008 global financial crisis and policy paralysis, Gujarat was taking strides in fintech…

India is now integrating with the global supply chain and GIFT City is one of the major gateways.”

On growing financial awareness among the general populace, Modi cited AMFI’s assets under management (AUM) which grew from Rs 10 trillion in 2014 to Rs 35 trillion by June 2022.

Among the MoUs exchanged by IFSCA were those with the Monetary Authority of Singapore; Commission de Surveillance du Secteur Financier, Luxembourg; Qatar Financial Centre Authority; and Finansinspektionen, Sweden. IFSCA also exchanged a MoU with the Department of Space (DoS), Government of India, to unlock the enormous opportunity of convergence between FinTech and SpaceTech.

With a built-up area of 300,000 sq ft spread across 27 floors, the upcoming IFSCA Tower headquarters building is expected to be completed by 2024.

Commending IFSC’s progress in banking, finance and insurance, Sitharaman stated that total assets in banking had doubled to stand at $32 billion.

“Hedge funds are looking at this jurisdiction (IFSC) for pooling of global funds that can be invested in India… IIBX is a major step. India being the second largest consumer of gold, we will now be able to command global prices,” Sitharaman added.

The union finance minister also reiterated GIFT-IFSC being rated among the top 15 centres globally, which are likely to become more significant over the next 2 to 3 years by Global Financial Centres Index, London, in its latest report.

NDB, which has approved 20 projects in India totalling approximately USD 7.2 billion, will work closely with the Government, public and private sector agencies in the Indian sub-continent to identify projects with strong development impact.

The Association of National Exchanges Members of India (ANMI) and Commodity Participants Association of India (CPAI) jointly submitted a letter of intent (LoI) on behalf of over 100 Broker-Dealers to set up their operations in GIFT-IFSC. The India INX saw the 75th listing of bonds, with bonds cumulatively valued at $50 billion being listed on India INX.

Moreover, in order to mobilise capital flows for corporates, governments and institutions in India and other parts of the world to achieve their environmental and social goals, the International Sustainability Platform (ISX) was launched at GIFT City on Friday.