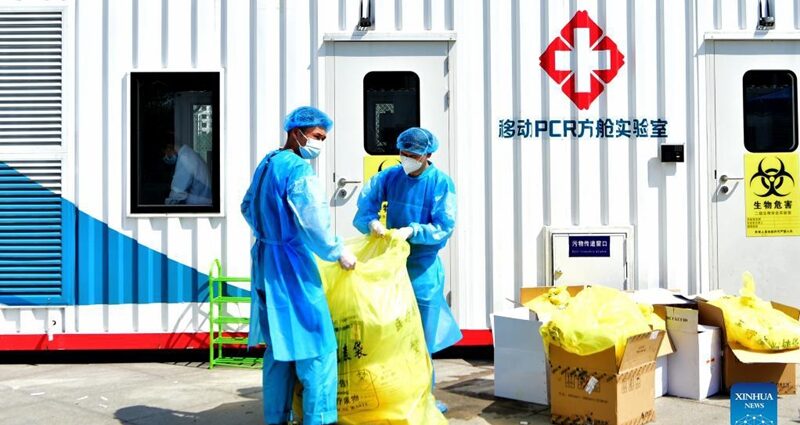 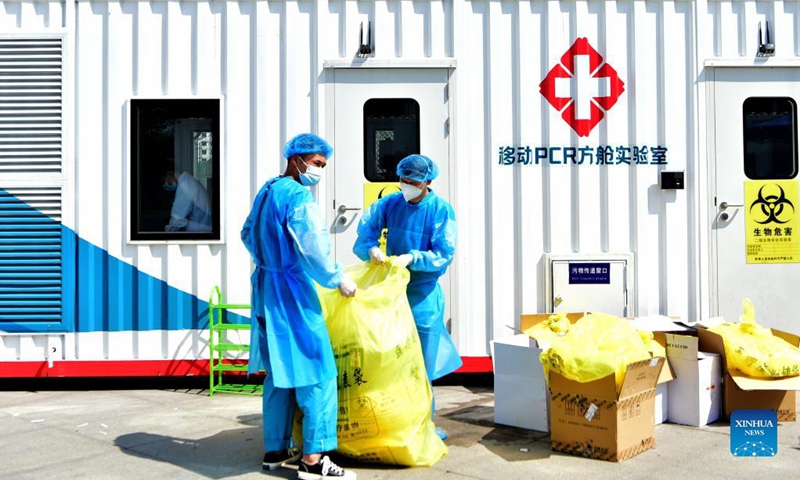 China is fully able to process the medical waste generated by the COVID-19 nucleic acid tests in the country. The amount of waste has become a concern, and even an excuse for some Western media to criticize the country’s anti-virus policies. Moreover, China’s system of handling the waste has gained approval from international authorities, who have even introduced the experience to other countries.

However, it has been proved that cities in China have established a relatively complete and standardized medical waste collection, transportation and disposal system, and the medical waste in remote areas can basically be covered as well, the Global Times on Monday learned from the Department of Solid Wastes and Chemicals under the Ministry of Ecology and Environment (MEE), which stated China’s medical waste disposal system during the epidemic in detail.

Nucleic acid testing includes multiple links such as sampling, transporting, testing and reporting. Solid waste are generated in all links, such as discarded swabs, packaging, masks and protective clothing, which have certain infectious risks. The waste have been sorted and managed according to the sources and attributes.

The waste generated by the nucleic acid testing institutes, including medical institutes, disease control institutions and third-party medical testing laboratories, were disposed as medical waste. For the waste of antigen tests, which are used by medical and health institutes, isolated personnel and community residents, if it is related to positive cases, it will also be disposed as medical waste, otherwise the waste is managed as domestic refuse.
Every 1 million people would generate about 5 tons of nucleic acid testing waste, the Global Times learned from the MEE.

Since the outbreak of the COVID-19 epidemic in 2020, the National Development and Reform Commission, the National Health and Health Commission, the Ministry of Ecology and Environment and other governmental departments have successively issued several regulations to guide and urge local governments to strengthen the construction of centralized medical waste disposal facilities.

By the end of 2021, China has 540 centralized medical waste disposal units, which could dispose 2.15 million tons of medical waste annually, a 39 percent rise as 2019. Local regions also have the capability to response to emergence situation.

China produced 1.18 million tons of medical waste in 2019, with the waste disposal capacity that year standing at 1.54 million tons. In 2021, the medical waste generated in China reached 1.4 million tons, among which 196,000 waste related to the epidemic were cleared within the day.

After the COVID-19 epidemic outbreak in 2020, the MEE issued several documents to enhance environmental supervision and service measures.

At the same year, the ministry released a pollution control standard on medical waste disposal, which regulates the emission concentration limits of dioxins and heavy metals in flue gas of medical waste incineration.

Currently, China’s medical waste disposal all have obeyed the standard, and the environmental risks are generally controllable.

For instance, during the latest round of local epidemic in Shanghai this year, the peak amount of medical waste generated reached 1,420 tons per day, 4.2 times of that in early March. Under the instruction of the MEE, the daily disposal capacity of 404 tons was gradually increased to 1,585 tons per day. From March 1 to July 30, all 108,000 tons of medical waste generated in Shanghai were properly disposed of.

Under the supervision and control of health, environment, transportation and urban management departments, the nucleic acid testing waste has been properly disposed and the risks are controllable.

As early as in 2004, a project between China’s then Ministry of Environment Protection and the United Nations Industrial Development Organization (UNIDO) on the sustainable development on medical waste have been approved and saw achievements, which promoted the reduction and detoxification process of medical waste in China, leading to about 40 policies, regulations, standards and instruments, according to the MEE.

During the COVID-19 epidemic, the UNIDO has also assisted the medical waste disposal and showed appreciations on the achievements of China’s medical waste management and disposal work in the process of epidemic prevention and control.

Based on the work experience during the epidemic in China, a medical waste emergency management training film was produced by the UNIDO, which has been publicly released on the UNIDO’s official social media.

China has also been sharing the experience and wisdom in medical waste disposal. On June 24, 2020, the Basel Convention Regional Centre for Asia and the Pacific published the Handbook of Emergency Disposal and Management of Medical Waste in China to the 187 contracting parties around the world.