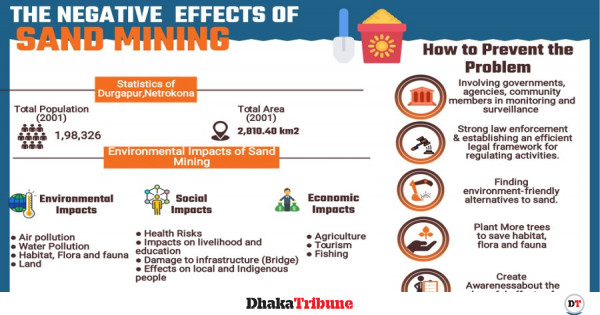 Sand mining can be regarded as a silent threat to the global ecosystem, having a significant impact on climate change, if it is not done appropriately. Unsustainable sand mining could result in riverbank collapse, deepening of river beds, sinking deltas, and coastal erosion as well as biodiversity loss, especially when coupled with the impacts of dams and climate change. Illegal, indiscriminate, and unscientific sand mining wreaks havoc on Bangladesh’s ecosystems. Rapid urbanization in Bangladesh increases the demand for sand in the construction and ceramics industries. Thus, sand mining is a lucrative business, which if not done in a regulated manner, can encourage illegal extraction. The entire sand mining is supposed to be regulated by law. Illegal sand mining is an offence under the Sand Quarry and

As per the law, the govt. prohibited sand quarrying within a kilometer of bridges, culverts, dams, barrages, embankments, highways, rail tracks, residential areas, and other important structures. A particular miner is given a certain part of the river for sand mining purposes. But what happens is in most cases they are going much beyond the leased-out area and extracting sand from parts of the river that have not been leased out. Sand lifting without permission from the authority is also prohibited by this law. This is astonishing to see there’s hardly any monitoring at the local level. As a result, the entire river ecosystem is bearing the brunt of unregulated sand mining. This law has failed to regulate illegal and excessive sand mining, which has a negative impact on the environment and human lives.

River sand is preferred for construction because it requires less processing and has better quality than other sources. However, it comes at a massive cost to the river and those living around it. There is hardly a single house, road, bridge, or port in South Asia whose builders can claim to have constructed it entirely from lawfully procured sand.

A recent visit to the district of Netrokona revealed the horrible condition of the Someshwari river. Compared with the past conditions, the place now appears deserted. The Someshwari River is close to extinction as it is possible to physically walk over the river, which once had a sufficient flow of water all year round. The river was shallow during winter but full to the brim in monsoon. None of this exists anymore. Sand mining impacts tend to be felt quite locally. Then the question is globally, why does this matter? As you scale from that and think about it more collectively, concrete uses cement, cement production uses vast quantities of CO2. So, this whole industry is exacerbating climate change.

The Someswari River originates from the Garo Hills of Meghalaya, situated at the Indo-Bangladesh border. The river eventually flows into Bangladesh through the Durgapur Upazila of the Netrokona district. This location is well-known for several historically significant events. This Upazila witnessed several notable uprisings, including the Garo uprising, the Hati Khedauprising insurrection, the Tangka uprising, and the Tevaga rebellion. Indigenous peoples and other marginalized groups led these historical uprisings in protest against the oppression and exploitation of the elites.

This Upazila is home to numerous indigenous Garo, Hajong, Hodi, and Barman peoples, whose approximate population remains unknown due to the unavailability of segregated data for indigenous peoples. Traditionally, people in the area have made their living from agriculture, weaving, fishing, and running small businesses.

The introduction of sand mining has resulted in employment among the local communities. However, the adversities significantly outweigh the positives. Sand mining disrupts and eventually eliminates habitat in mined zones. It changes the channel shape, physical habitats, and food webs – in other words, the entire ecosystem. Additionally, it raises the flow velocity, disrupting the flow regime and eventually eroding the river banks.

The ultimate manifestation of the impact of sand mining on the ecosystem can result in:

1.    Channel widening causes streambed shallowing, resulting in braided flow or subsurface inter-gravel flow in riffle places, impeding fish passage between pools. As a result, fishing has become a non-feasible means of living in the community.

2.    As a result of solar radiation exposure, the riverbed becomes dry, depleting the surface and groundwater. As a result, the river has gradually stopped becoming a source of fresh water for the local communities.

3.    Sand depletion in streambeds results in the deepening of rivers and estuaries and the expansion of river mouths and coastal inlets. In addition, it results in the infiltration of saline water.

4.    Vegetation removal and soil profile degradation worsen the habitat above and below ground, resulting in a decline in faunal populations.

The sand mining in Netrokona has resulted in ecological disaster, jeopardizing the livelihoods of Hajong, Mandi, and other ethnic groups, destroying hills, forests, and wildlife, polluting water and air, and threatening food security. The roads are deteriorating, and the extraction causes increased noise and air pollution. This area has deteriorated to the point of being uninhabitable. The indiscriminate extraction has produced a deep gorge, resulting in landslides in the area, occasionally killing community people. According to residents, illicit sand mining from rivers and wetlands is carried out with the cooperation of elected public leaders. Construction companies use heavy machinery to collect sand from rivers, causing damage to the riverbed and the farms that line the banks. Illegal sand extraction intensifies riverbank erosion throughout the year. The sand is not only taken for construction purposes but is utilized to fill in wetlands as a precursor to land-grabbing. Sand lifters fondly refer to the collection from sand mining as raw gold as it is inexpensive to extract but fetches a high price.

Policymakers continue to disregard the adverse impacts of sand mining while the general public is unaware of the operations’ large-scale environmental impact. Establishing a global mechanism to monitor sand mining and its consequences cannot be overstated. Before authorizing sand mining, rigorous scientific and environmental impact evaluations should be conducted. Additionally, increased efforts are needed to push governments to improve existing laws and adopt new regulations when necessary. These strategies should consider how to avoid prioritizing short-term gains over long-term gains and how to incorporate environmental considerations into decision-making. Finally, it is necessary to establish an international framework for sustainable sand mining. A worldwide framework could include international rules and enforcement measures, such as a licensing system that discourages sand, monitoring systems, and environmentally friendly technologies. Such a strategy will likely require significant funding from the governments and businesses most involved in sand development to realize the anticipated benefits. Finally, active steps should be focused on four areas to mitigate the negative environmental impacts of sand mining activities:

Involving governments, agencies, and community members in monitoring and surveillance activities to identify potential threats to the environment caused by sand mining activities

Fatema Akhter is working at the International Centre for Climate Change and Development (ICCCAD) as a Junior Research Officer. Her research interest lies in Child-centric adaptation, indigenous knowledge & climate change, and gender-based development. She can be reached at [email protected]